Why use carsharing cars is dangerous for health

Steering wheel – a hotbed of bacteria worse than a toilet 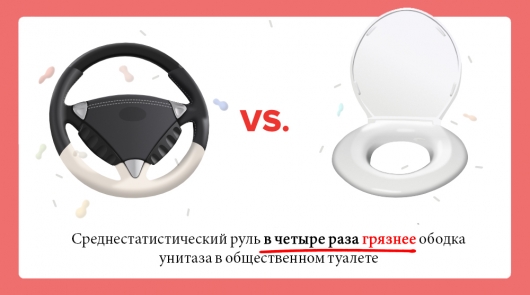 Current trends are changing the automotive landscape beyond recognition with lightning speed. Take, for example, the opportunity to share one car among thousands of other drivers. We are now about carsharing – as economists say – the future of motorization of the world in which Moscow has overtaken all of the most advanced cities in other countries. Convenient, even profitable, but there is one major caveat that will make neat to keep these machines away is the steering wheel in such machines. What’s wrong with him?

According to the company CarRentals.com research, from the hygienic point of view, all is not well with the cleanliness of the car interiors, which often change their owners. Moreover, the study deals with the rental car, changing my drivers, but it’s not often that we talk about car sharing, the cars in which in a day can change… dozens of “owners” of driving.

The study of foreign experts showed that the average car has about 700 strains of bacteria, and the steering wheel is the most dangerous and disgusting part of all this action. 700 stamps, Carl! I’m certainly not a hygienist, but it sounds like this, under the rim, sorry, the toilet less any bad bacteria than the average rental car.

Especially all compounded by the fact, also noted in the study that in such vehicles, people often spend meal. Leftovers, crumbs and fallen pieces will not add health after a visit to similar cars. Brrrr, horrible!

But even these inhaled bacteria in the cabin in any comparison do not go with a steering wheel which, apparently, can be much more disgusting the average Elevator button, seat in a public restroom or smartphone. Yeah, if you didn’t know, the screen of your smartphone is also the greatest messenger of all kinds of terrible bacteria and unpleasant diseases. 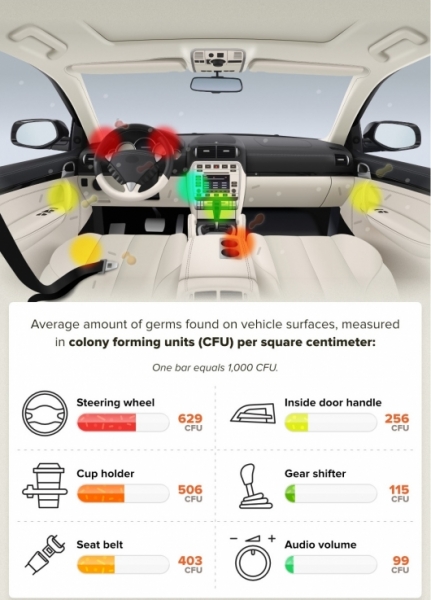 Now, the steering wheel is the dirtiest place in the car, again, according to the study CarRentals.com the experts on rental cars put the control number one. Thus the wheel of health risks was able to beat the Cup holders, seat belts, inner door handles, shift lever and the “whirlings” of the volume.

The study showed that the steering wheel is two times dirtier than the buttons in the Elevator four times (!) dirtier read more dangerous than the toilet seat, and six times worse than the screen of the smartphone.*

*We don’t know why the company is involved in, judging by the title of the website, the results of the rental vehicle, he decided to publish such a scathing study that cast doubt on her business, but to take this analysis as 100% face value is not necessary. We know at least two other studies that showed that public toilets are cleaner than the screens of our smartphones.

Also at risk, researchers continue to are gas guns. The fact that CarRentals.com while studying the topic, take the unit number of bacteria and their colony forming units (CPC) per square centimeter. They found that the average wheel and the COP corresponds to 629, in elevators – KOP 313, public toilets – 172 COP, the screens of phones, to be 100 COP.

For filling the same “guns” colony forming units, apparently, millions (screenshot from the website carrentals.com below) – 2.6 million buttons and 2 million on the pen, to be exact. If you want to reduce your exposure to germs, try to fill up with premium fuel: the study showed that speakers with expensive fuel grades 2 million COP, compared to 3.2 million standard. 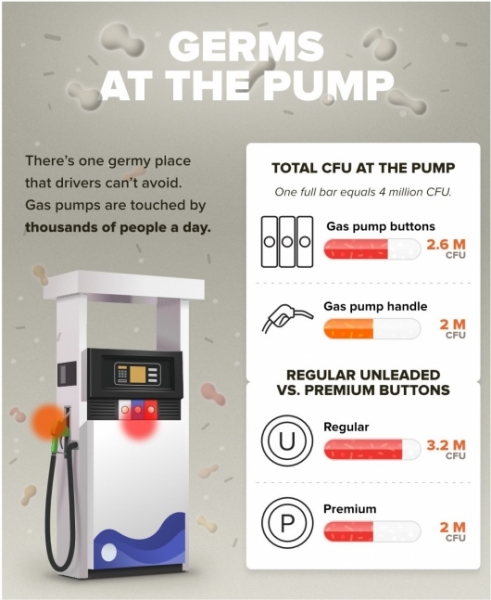 To top it all off, researchers CarRentals.com interviewed 1000 people about their spending habits in the car cleaning. The survey showed that 32 percent of drivers clean their car only once a year, and 12 percent said that they never did.

So, think about it. Maintain cleanliness in your car. Be sure to wash your hands after using karteninhaber or rental car. And also, dressed in gloves. And then who knows what.

Five small tips on how to minimize the danger of bacterial in the car:

1. Spend sanitary cleaning once a week. Wipe the steering wheel, gearshift lever, handle door opening cleaner.
2. Time to replace the cabin filter
3. Wipe the car keys. You often hold it in your hands. Wiping down with a moist antibacterial wipes won’t hurt them.
4. Perform wet cleaning after and before winter. Don’t forget to dry the cabin, opening the door and putting the car in the sun.
5. Every few years, change the mats, especially if they have a fuzzy structure.