That’s who came up with the prompt for the drivers on the dashboard, which gives you the opportunity to know which side the car is the gas tank. 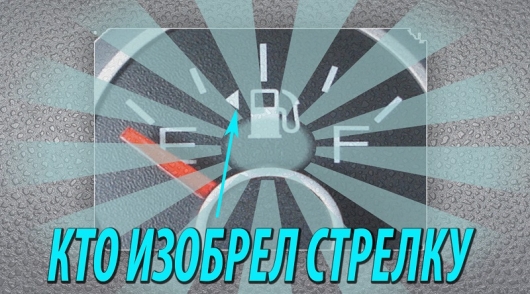 I bet that most of our readers already know how, without leaving the car, to determine which side is the gas tank. But when the hack first appeared online, it was blown many motorists. This fantastic and simple bits of man-machine interface makes this insane invention. Unfortunately, until recently, nobody knew the name of the brilliant designer who first came up with labeling the collection tubes, the gas station icon with an arrow located on the side where the car is the gas tank. But now the world knows the name of the inventor. But not so simple. It turns out that this decision had already proposed the use of company Mercedes. But in the end the glory went to the Germans.

Recall that we are talking about the arrow that is usually located on the dashboard next to the gas station. The arrow indicates what side the fuel cap.

So, the unsung hero/inventor of the arrow on the icon of the gas station, which is on clean-up any car, designer Jim Moylan, who worked at Ford. The idea came Milano in April 1986 when he drove up on the corporate Ford at the gas station. On the street at this point, it was raining. Jim got out of the car to fill the car, and realized with horror that parked the car not the side because the fuel tank in this car was on the other side. In the end, Jim was soaked to the bone due to the fact that you chose the wrong side for refueling. Arriving at the office, he came up with to designate the gas station icon on the dashboard an arrow pointing to which side the car is the gas cap. He outlined his thoughts on paper and sent to the bosses. The authorities appreciated the idea (even more they were attracted that the introduction of this idea were a cheap date). In the end, the first gas station icon with an arrow appeared in 1989 on the Ford Escort and Mercury.

But not so simple. Very often in the world of glory of pervoizobretatelya do not accrue to those who actually something introduced and invented the first. That’s the idea with the arrow on the instrument panel indicating the location of the fuel tank in the car, in fact was realized before it was invented by Jim Moylan. The fact that before the appearance of this arrow in Ford Escort and Mercury this idea was implemented by company Mercedes. But the story developed so that the whole glory of the invention went to the designer of the Ford company. 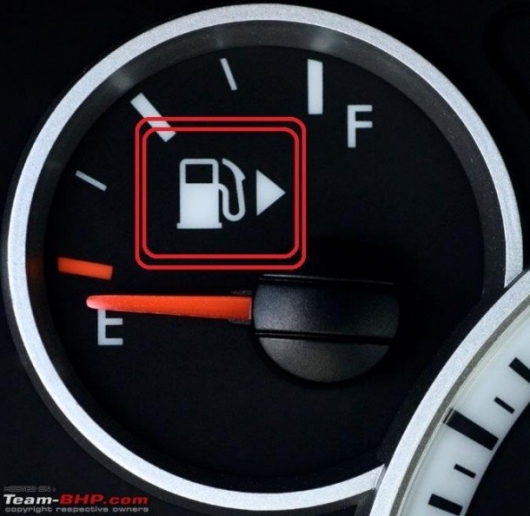 No, I do not dispute the story of Jim Moylan. But I am 100% sure that his idea was not born from scratch. Rather, it was based on the fact that we have come up with Mercedes. After all, the idea with the arrow on the icon of the gas station really has an earlier Genesis.

The fact that the first example the arrow on the pump pointing to the location of the fuel tank, appeared in 1976 on the dashboard Mercedes-Benz W123.

Yes, compared to a modern implementation of the arrow on the icon of the gas station is a new solution from Mercedes is not the same, but conceptually it is very close to what was offered by the designer Jim Moylan.

Combi-instrument Mercedes-Benz W123 included a small red indicator light that warned of low fuel level in the tank. Unknown designer dashboard W123 decided instead of square or round signal bulb to make it in the form of an arrow which is placed next to the gas station on the dashboard. And the most interesting that red arrow was turned to the side, where were located the fuel tank in the Mercedes-Benz W123. 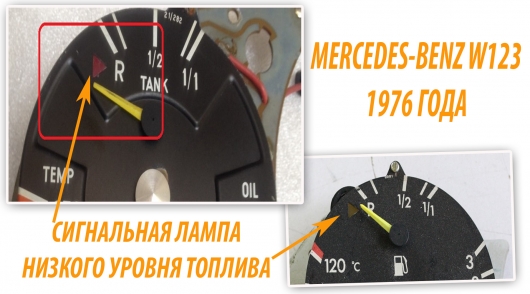 I don’t think it was a simple accident. Arrow apparently, not only intended to alert you to low fuel level in the tank, but also to identify the location of the gas tank. Don’t believe? Then here’s the earlier part of the dashboard where the warning light is represented by a red square. Here, the function of warning lights is only one alerting the driver of low fuel level in the tank.

The transition on the small triangular arrow instead of a square was deliberate and not accidental. Because arrow really shows which side of the Mercedes W123 fuel tank is located. This is hardly a coincidence by pure chance. In General, this arrow had the same meaning as arrow Jim Moylan.

Unfortunately, even in the Mercedes-Benz forgot about this arrow. Because later on many Mercedes cars this arrow has disappeared and only appeared first on the G-class in 1997.

Maybe the employees of the company Mercedes often should I visit your Museum, not to forget about inventions created by the German brand?

Most interesting is that Mercedes is silent and does not comment on the designer Jim Maulana, which required the invention of the arrow on the icon gas tank. While it is clear that it is not.

We have to admit that even though Mercedes-Benz and ahead of Jim Moylan, innovation from designer Ford was much more influential. So his fame is well deserved. So today I thank what Jim Moylan, which is officially considered the inventor of the arrow on the icon of the gas station that says every driver of a modern car, which side is the fuel tank, to know in advance which side to adjust the car to the gas station at the gas station.