When in Russia will introduce new license plates? 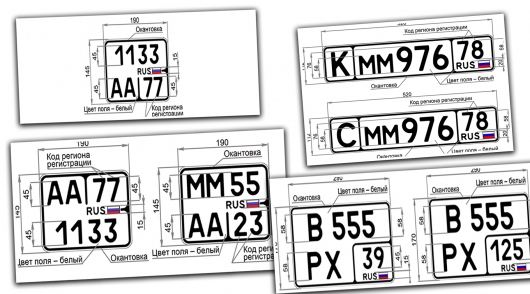 Still, apparently, in Russia introduced a new standard registration plate. Accordingly, in 2019, our country can receive the new numbers.

So, on the website of Rosstandart the following order:

THE MINISTRY OF INDUSTRY AND TRADE OF THE RUSSIAN FEDERATION

THE FEDERAL AGENCY FOR TECHNICAL REGULATION
AND METROLOGY

ON APPROVAL OF THE NATIONAL STANDARD OF THE RUSSIAN FEDERATION

In accordance with article 24 of the Federal law from June 29, 2015 N 162-FZ “On standardization in the Russian Federation I order:

What license plates will appear under the new standard?

Here are the new license plates 2019 for motorcycles: 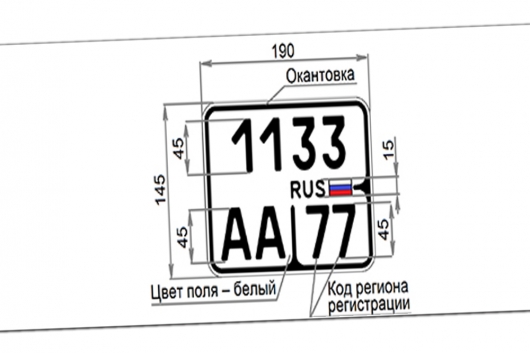 The fact that many foreign cars custom license plate bracket, complicating the installation, the existing number plates manufactured according to GOST 50577-93.

In the end, for these machines introduces new license plates reduced size 290 x 170 mm. At the same time the owners of such vehicle is necessary izgalyatsya, bending a standard license plate size 520 x 112 mm.

Here are the new license plates 2019 for vehicles with non-standard site for the room: According to the new GOST in Russia are introduced (the first time) a special state license plates for mopeds, which will be exactly the same as a new motor, but with a different designation of letters and numbers – ММ12АА77RUS

These license plates will be issued to a powerful scooter and motorcycle off-road vehicles the maximum speed which can exceed 50 km/hour and engine capacity of over 50 CC.

Here are the new license plates 2019 for mopeds with an engine capacity over 50 cubic cm: 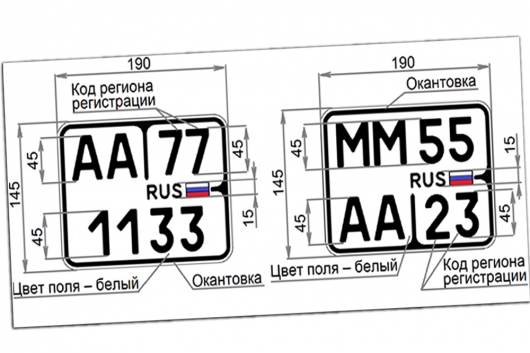 Rooms for off-road motor transport, not intended for movement on highways of General use (left) and scooter (right)

These numbers will be the same size as the normal standard for mass transportation, with the exception of the presence of the letter “K” or “S” denoting the vehicle type: sports car (sports car racing track rally cars, etc.), classic old car.

These letters will go to the beginning of license plate, limited by the vertical bar from the rest of the number fields.

For example, the number of the old “Penny” (VAZ-2101) will be here this alphanumeric format:

For a real sports car, the room will look like this:

Looks like the license plates for classic and sports cars: 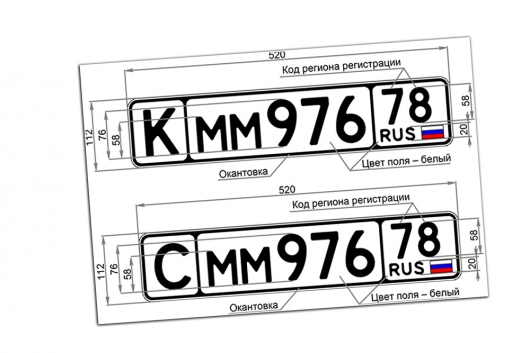 Is it possible to drill the plates, creating new holes? According to today’s legislation to license plates it is impossible to make additional holes. Under the new legislation, which will come into force in 2019, in connection with the conduct of a new state standard for license plates vehicles, a ban on drilling holes in rooms will be removed. However to make holes in the places where a hole might affect the symbols, flag, and code the RUS will remain disabled.