What are the advantages of suspension double wishbone front MacPherson strut

What is suspension of double wishbone? 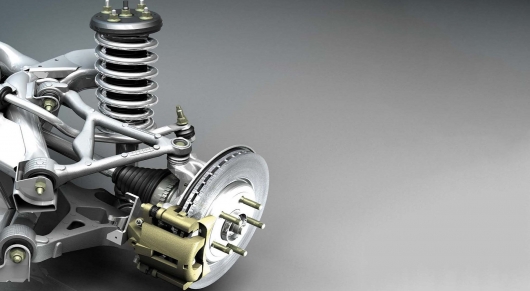 When you start talking about newly introduced an exciting new sports car or supercar, you may notice that usually begin with the important fact that the car received a “suspension double wishbone”. This is a pretty good design (still it was bad, otherwise it would not have to use expensive racing car models), are aware of this, perhaps, everything. But what is the benefit design? Let’s see.

Before we continue, we need to say a few words about the concept front suspension type-MacPherson (McPherson), which is also familiar to many generations of motorists. The manufacturers even use this type of suspension more often than its counterpart in the two wishbones.

Oddly enough, the model front wheel, designed by Earl MacPherson Styles, was nothing short of a logical continuation of the development of double wishbone suspension, but with the significant assumptions on the part of simplification, cheapening and upgrading both the structure and the kinematics of the suspension system.

The model has only one lever lower. Instead of a second lever – hinge with reinforced damper with conical springs, which have a dual obligation: damping of vertical vibrations and holding the wheel in a given horizontal plane.

The suspension design is compact and small thickness of the middle and upper part compared to the multi-link and double-wishbone suspension, which makes it ideal for cars with transverse engines. Also it is simple and cheap in construction.

In General, this design works on rails racks surprisingly well.

However, the design of the stand limits the ability of engineers to optimize collapse. 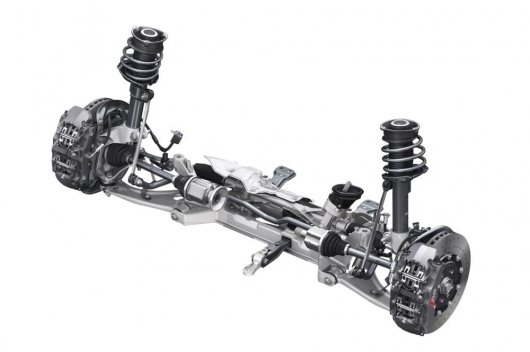 In the photo above you see an example of Assembly of a front suspension with MacPherson struts from the model of the sports car Audi TT RS. Now compare with the layout of the double wishbone R8 below. Here we have two levers: the one at the top and one at the bottom, the shock absorber thus assigned to the lower lever. 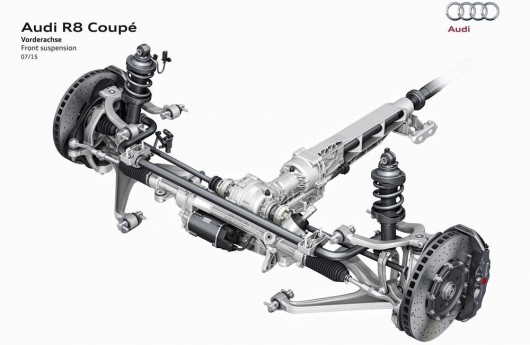 This design offers a more progressive geometry. Unlike the version of MacPherson, the more compressed the suspension with double wishbones, the more negative camber, which is carried out through the use of levers of different lengths. This has a positive effect on management in those moments when you much lay into a turn and the car starts to slide off the path. In these moments, the suspension system on the wishbone will support the best contact of the tyre with the road. So, the car will be more stable ceteris paribus.

Of course, cars with MacPherson suspension can be improved with the installation of the hard spring, but to achieve the same characteristics as double wishbone, they are not capable. The last may be soft, without damage to the contact patch. For example, this scheme is perfect for the new Alpine A110, which, having front and rear double wishbones, shows excellent performance. Suspension is not so stiff, which leads to the fact that the car remains comfortable even on bumpy roads.

Animation showing the increase in negative camber when suspension is compressed

Due to the more complex construction dual levers allow to set the camber (tilt of the average plane of rotation to the longitudinal vertical plane), caster and roll angles. The design also gives you much more freedom with the placement of the dampers, which again leads to the possibility of a variety of shock absorbers installation. However, suited to a variety of model setup exclusively for racing or some very expensive road-going sports cars.

Finally, since the shock does not stick out at the top, this type of suspension is much more economical in relation to vertical space – you get a reasonable amount of suspension travel (its travel) without the need to raise the ground clearance, which will adversely affect handling by increasing the center of gravity.

As you can see, the suspension on the double wishbone has a lot of positive qualities. So why not many of cars built on it? 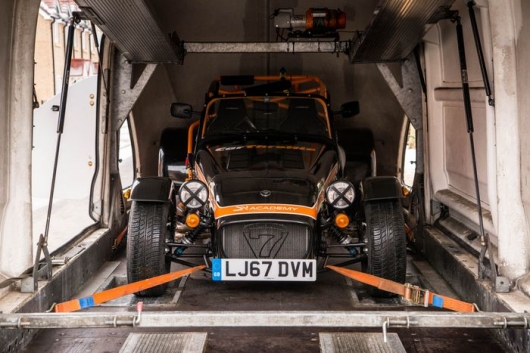 Like all “seven” to Caterham, this version of English sports car has got front suspension with double wishbone

An important factor is cost. Where the MacPherson strut is simple and cheap, suspension with double wishbones more expensive and complicated. Design and its manufacture, will tend to increase production costs, so it is often placed on more expensive models, where the quality of control is more important than monetary costs. Plus the more joints and links, the greater the likelihood of breakdowns. The owner will be burdened with higher maintenance costs.

The next problem is the location in the engine compartment. Yes, vertical installation has some huge advantages – the place is rife, but in the horizontal plane the situation is not so rosy. The “extra” lever on top is doing its job, thus eating a little bit of space inside the cabin, increasing the width of the vehicle or doing both at the same time.

As is often the case with most aspects of the car’s design, the question – compromise. Double wishbones in the front suspension can be seen as a good, high-quality technology, but it’s not the best solution for all cars.