Video: a Huge rock fell on the car (Everyone survived)

If you have ever drive on mountain roads, you’ve probably seen these signs: 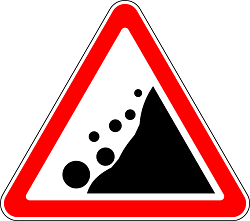 According to the traffic regulations of the Russian Federation is warning sign number 1.28 “Falling rocks”. Its function is to warn motorists and pedestrians road users of the danger of falling under the collapse, landslides and rockfall.

Fortunately, many motorists never have to experience such deadly misfortune, which is not true of the driver from China, whose car literally was squished exact impact of the fallen stone. The video is shocking. How is this possible?! As if on purpose!

According to some reports, shot in Sichuan (located in South-West China) video that tells us not only about the tragic incident shown in the video, but about the miraculous rescue of the passengers inside the car.

The Daily Mail claims that all people who were inside the car people were recovered from the wreckage, and then the ambulance brought the victims to a local hospital where, reportedly, it became clear that the damage does not pose a threat to their lives.

According to others, the passengers were able to leave the car alone, get out from under the wreckage before the arrival of rescue services. It is reported by the Asia publishing house Wire.

Anyway, the main thing people were left alive. As for the reasons of emergency – to blame heavy rains that washed away the ground around the boulder, and he as no time separated from the rocks was so much trouble.