Two new sedan from the VW Group: How will the new VW Passat CC and Skoda Octavia [Part 2] 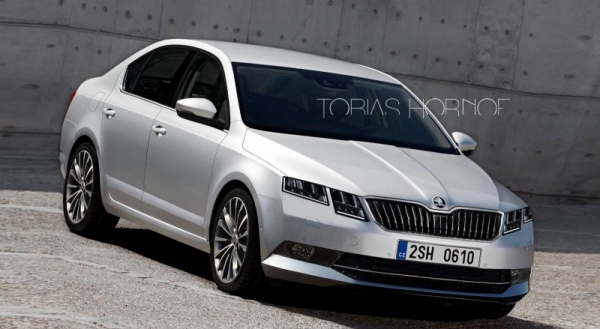 Today we published photos of a prototype VW Passat CC next generation and it’s not all new clothes on this day. Proceed to the second part of the update of the VW Group sedans. We present you exclusive photos of the exterior restyled Skoda Octavia.

The first and most important thing you need to know about the updated appearance of the Octavia, is that it will be changed with an eye on the premium flagship model of the Czech automaker Skoda Superb. Date by which will be shown on an updated Octavia – the second half of 2017. The beginning of sales in 2017 to coincide with the start of sales of the new crossover Skoda Kodiaq.

Czech designers have prepared a major update of the model. because as has been said by the chief designer of Skoda, Jozef Kaban Octavia is the “heart of the model range”, and thus it should not lose when you upgrade the appearance, but on the contrary to purchase.

Changes according to some foreign media should be significant. This is directly confirmed by the rendering of the photos. Updated Skoda needs to obtain separate lights in the style of a Mercedes-Benz that will make its style closer to the future crossover Kodiaq. In addition, to change filesresearch radiator, it will be closer to the top models in the lineup, Skoda Superb. Also the car will be equipped with new bumper, while the rear part will get a different led optics. As you can see from the photos the main focus of the changes will be made at the front of the sedan. Of course, improvements will be applied to the wagon version.

The dimensions of the car itself will not change. Base and the technical component of the car will remain the same until the next generation Octavia.

Despite the fact that the parent company Volkswagen already offers a hybrid variation of Golf GTE is likely that Skoda will wait with the upgrade of the motors. Therefore, the face-lifted version of the 2017 model year will receive the same set of engines as the cars in the current generation. Not planned yet to run a hybrid version of the car.

In principle, this may not be a serious problem, given that the range of engines the Octavia is quite extensive, ranging from modest 1.0 litre petrol TSI and 2.0 liter TDI. The vRS version will be installed in the sports-minded diesel and 2.0 liter petrol engines with a capacity of more than 200 HP Manual gearbox is used as standard, DSG with double clutch will be offered as an option.

Finally, the changes to the salon. Here new things will also be noticeable. A new multimedia system with a large 9.5 inch touchscreen, support for new-fangled Apple CarPlay and Android Auto support gesture recognition. According to insider information, inter alia, for the redesigned Octavia can install a virtual instrument panel, Virtual Cockpit, the type that are installed on the Audi. Expect to expand the color palette and trim materials.