Turbopowered in Moscow: What is it?

Scientists have prepared new road experiment with the intersections

Despite the fact that the scheme junction “circular motion” in Russia is not the most common, and in the capital of crossroads with a circle amounts to only 40 in tens, planned in Moscow, the experiment will be important enough to change the infrastructure and improving the flow of vehicles in the future.

About the future taken care of in the Center of traffic organization. The official Twitter account of the techs posted the following text message, backed by his visuals:

“Circle on the road is always a challenge too many rebuilds. Do pilot “turoperatora” at the intersection of Chertanovskaya and red Lighthouse. Draw the corridors on the principle of “to the right, to rebuild should not”. There will be less conflict points, everything has to go 20-30% faster,” twitter.com

About the beginning of the experiment and location construct a new intersection to the guests and residents of the capital will inform you in advance, but it is already known that the first “turboproject”, which motion will be implemented with the help of special guided partitioning, I plan to organize in the area Chertanovo Central this year. This is also reported in the press service of TMS:

“In Moscow will be the first turbo-roundabout intersection. The pilot will be <…> at the intersection of Chertanovskaya and red Lighthouse. Unlike conventional roundabout on the pilot most of the directions will be displayed along the optimal trajectory using the guided partitioning”.

TMS will be around the clock to monitor traffic at a new intersection in real time using surveillance cameras, also about innovation drivers will be alerted with an information Board.

According to the magazine “za rulem”, as in the experiment at the crossroads will be installed new road signs and information boards:

If the experiment is successful, it is likely that new characters will also be introduced to the state standards and the SDA.

Where did the new type of turboproject? 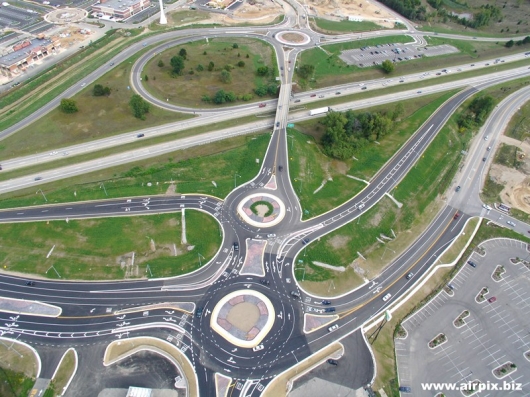 Like many other updates – from the West. As is known, the probability of collision at a roundabout compared to a standard intersection below at times, to be exact 8 times. However, the circular motion due to the rarity of the application of intersections of this format remains a serious puzzle for drivers. Someone who skips? The way to go?

Problem was solved by the British, by entering the so-called “Roundabout” intersection. The scheme, introduced more than 50 years ago for a long time, lay on the shelves, and only recently very quickly began to gain popularity throughout Europe and now has reached Russia.

Its main feature is minimal suppression of the trajectories between the moving vehicles. Be reconstructed for the exit to the right do not need to stop for passing vehicles take literally seconds tubes will not be collected. 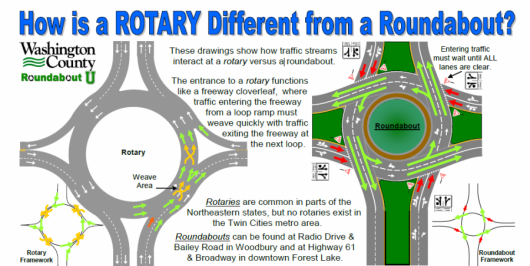 Later, an improved version of the circle was invented in Holland, and called it the turbo-roundabout. Cars drive through it even faster and do it safer. Drivers at these intersections all clear (most of them). Depending on which lane the car is moving (at a traffic circle is prohibited to readjust), it is possible to see its trajectory and quickly overcome the circle. For example, right lane is straight and right, left – right, left or u-turn.

That’s what a new intersection. But since his passing:

And finally, we remind readers that entering the roundabout, the driver should skip the car moving in a circle. Entering the circle is inferior to the road. Moving in a circle have advantage before other participants of movement.

“13.111. At the entrance to the crossroads where the circular motion is organized and which is marked with 4.3, the driver of a vehicle shall give way to vehicles moving through this intersection.”.

Penalty for failure to provide benefits in a circular motion in accordance with article 12.13 (Failure to meet requirement of traffic Regulations to give way to the vehicle having the right of priority of journey of intersections) is 1000 rubles.