Even in the new Lada Granta there are problems [But small] 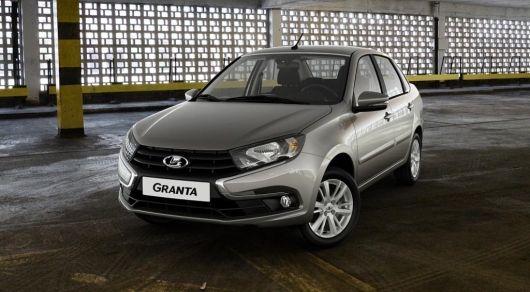 A little over a month ago it became known that the Lada Granta received a facelift that will help it to penetrate a total new family AVTOVAZ, even the name has changed – it now no longer “Kalina” and United under its old-new brand several types of body styles (sedan, hatchback, liftback, station wagon): 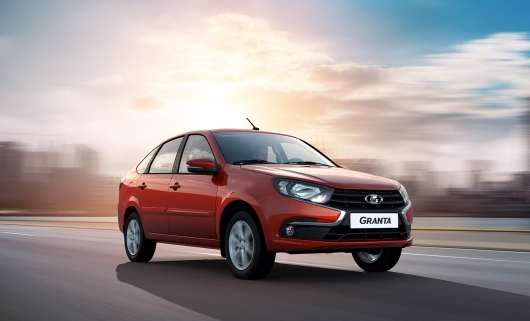 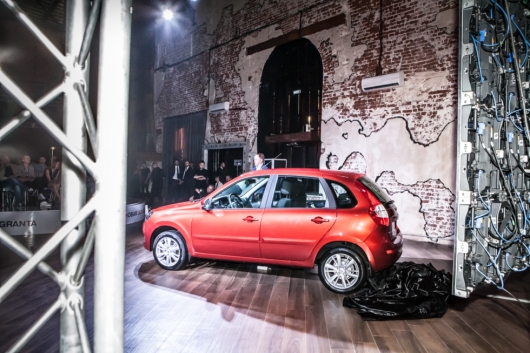 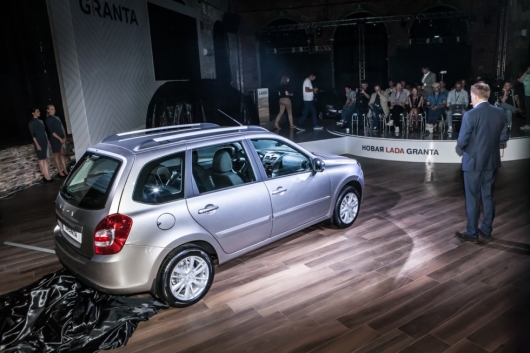 The front of both models is now identical. “X”-style in all its glory, is exactly the same as on Lada Vesta.

Indeed, if briefly say something about the looks, the updates to a greater extent affected the front part of: for models installed new hood new radiator filesresearch the signature “X”style and, of course, new lights. The hood moved a little more forward, which definitely gives the car more sportiness.

On the side are visible standard “Kalinowski” side (not very modern, but quite predictable, if you want to know why, follow the link to this article: Five answers to questions about new 2019 Lada Granta, where we argue on this topic), the back design also no revelations no changes are minimal.

By the way, the body will be painted in two new colors: gray interesting and attractive in red.

Inside there is some fine-tuning, but rather, they are not visual, and technical. However, here is what was completed in the interior (about it we wrote in the material):

Installed new seats. Outwardly, they look more modern, improved lateral support, a driver in addition, you can raise or lower the seat;

Modified the dashboard. It is made in a single “X”style and looks more modern with its previous version;

There are chrome rims around circular ducts;

Equipment supplemented by climate control (while the semi-automatic option. “Brains” will only monitor the intensity of the airflow);

Installed new lockers. This, of course, you will not see, but hear well. Hear less noise will make its way from the wheels to the salon.

Summary of updates – sedan, wagon, hatchback and liftback has received a new face, but the basis remains the same in its visual and primordial fact. But what about the reliability, build quality, ergonomics, comfort, and everything that distinguishes a decent car from a sleaze? There is some progress?

An interesting question. We started to study it, to scour the forums, watch the Runet the presence of at least some of the information about the face-lifted new product… and in that moment, when we have been desperate to find similar data (the machine is really almost no one is normal not tested), just stumbled on a wealth of knowledge about new Lada Granta website drom.ru. The article is called Restyled Lada Granta: a complete overview of new products and stocks and if you really want to know all the information about the restyling of the Grant, do not be lazy, be sure to check back on this material with “Drom”, read more review for the moment, you will not find on the Internet.

Now, armed with data from the article and some data from other sources, we picked the Top 10 most expressive “stocks” Lada Granta, which in the future can become a real issue for the owner. Let’s briefly go over them:

Oh, that’s that, and the build quality of Lada cars do better. Sledgehammers bolts was obviously not clog. However, questions from users of the new Lada Granta everyday reliability models still remain. Here what about this reported on the “Drom”:

“…as soon as I decided to switch the headlight control to the zero position, its handle was left in my hands…”

Guys even, not to be unfounded, even fixed this very problem on video:

As you know, where one has fallen off the “Twister”, there will be no second… Be careful!

On the loose hilt of forcorrection problem is not over: “…and the six yellow buttons with indication of the modes began to hang out at the landing place.” In the video above you can see the backlash of the sockets.

Automotive experience tells me that if some of the panels inside the car staggered – expect similar trick in another part of the interior. If not immediately, after many thousands of kilometers, but this problem can still occur.

“On-the-go steering wheel in straight-ahead position of the wheels looked five degrees to the left, as if the factory forgot to do the alignment”, noted the journalist, confirming the problem video:

If you see a similar problem on his Lada Granta, be not too lazy to drive to the dealer, have them check toe-in-camber. This can be in a new car, of course it shouldn’t. Otherwise you can say goodbye in the near future with the tires – with such backlash they must quickly eat up.

4. The use of screws in the twenty-first century 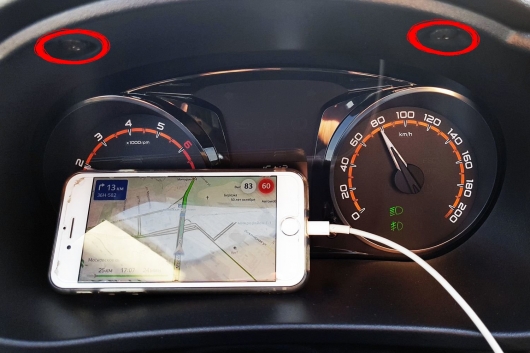 Photo taken from the site drom.ru

But it is noticed, judging by the forums, all the discerning users of new Grants is the General use of screws in visible places without the plastic caps. Rather, an aesthetic flaw than real. For example, such samoletiki: 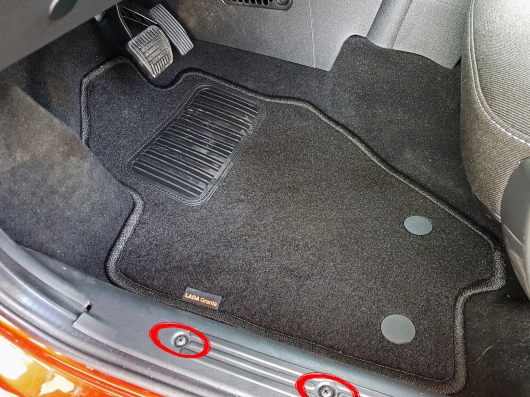 Photo taken from the site drom.ru

Of course it does not compare with the eternal classic “Sevens” or “Fives” WHA, where the entire cabin is mounted on construction screws, but nevertheless, to see such methods of mountings on the machine in 2018 is really something unpleasant. Let’s hope that the next generation of Granta will solve this problem.

Yes, that’s the price. A lot of forum users all over the Internet resent the fact that such a price tag is hung on the machine that continue to go nowhere. See and do – 608-623 thousand rubles depending on the body type in the maximum configuration is somehow not cool. There are certainly “minimalka” for 419, 436 thousand rubles, but “naked” Grant – very sad.

But this is interesting: “On the fly overclocking and adding thrust from the bowels of the car periodically there was a noise, more like a small bounce — this usually radiate vipranarayana exhaust system in contact with heat shields”. What was it? Probably nothing serious, as the journalist noted that over time, the rattling went by itself. Grind machine parts to each other.

Actually “Grant” and “Kalina” – the car is very reliable. Of course there is much to find fault on trifles, perhaps they are not very comfortable, etc, but that is simple and reliable – that’s a fact. At least serious breakdowns you have with them will not be exact. Here, 100%! At least so say the people on forums describing people’s experience with previous versions. With a facelift it’ll be the same or very similar.

7. The underestimation of speed by the speedometer? Indeed, for the first time about the such hear

Also, I should say that despite the cons this car is really slow goes down in price, staying b/a the market one of the most liquid cars. The reasons for this are several:

Easy maintenance (if something breaks, you can always easily fix it)

In General, the car for most motorists of our immense power, which the car is not a luxury but a means of transportation that do not want to spend a lot of money. Who understand that and appreciate it. Both the seller and the buyer.