Top 6 ways not to pay the fines from the cameras and vehicle tax: is it legal? 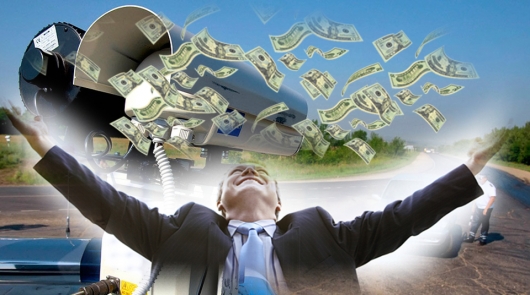 You often receive fines from the cameras fotovideofiksatsii? You mind giving your hard earned pay every year, the transport tax? But what to do. The law is the law – we are bound by it. Unfortunately, not everyone thinks so.

You won’t believe the Network has long been discusses the ways that supposedly allow you not to pay not only fines from the cameras, but even the transport tax. Moreover, the Internet is full of videos where many bloggers sagely reveal to his followers the secrets of circumvention of the law.

Some ways, at first glance, does not contradict the legislation. But is it? And is it possible in Russia on the lawful bases do not pay fines issued for traffic violations and don’t pay every year the transport tax? So there you go.

Not to pay fines with cameras: method # 1

The meaning of this dubious Council that, according to the author of the video, today the right of ownership arises from the moment of the registration/re-registration of the vehicle in the traffic police (as it was before), and since the conclusion of the contract of purchase and sale between the car dealer and the buyer.

According to the author, this allows you to use the new legislation in order to avoid paying fines for traffic violations. To do this, the author of the video suggests to be fictitious contracts of purchase and sale law, the company ceased operations.

Further, after receiving the penalty, you must contact the police and report that you sold the vehicle to the identified complex of photo and video fixation of traffic violations. In the end, according to the author of the video, issued in the name of the owner of the car the penalty will be cancelled.

First, just want to say that in most cases it is not. Most likely, the penalty will remain hanging on the owner of the car. The traffic police also will be asked to pay a fine and penalty caused by this damage will be advised to reimburse by way of recourse through the courts. So do not expect that by showing the fictitious contract of purchase and sale, you will save yourself from fines from the cameras you picked up.

But that’s not it. The author of the video openly calls for car owners to violate the law. The fact that such advice is based on providing to the traffic police forged a document (contract of sale). And this is fraught with criminal penalties.

Therefore, in no case do not listen to various tips online that supposedly will help you avoid paying fines from the cameras. Especially when it comes to the fake contracts of sale. Remember that no matter what the new owner you will make a fictitious contract of purchase and sale. In any case, such a contract would be a sham, that is false if you provide it to the police.

Avoid paying fines from the cameras and vehicle tax: methods No. 2, No. 3 and No. 4

And this is another daring video blogger who has decided that it has the right to teach people how to break the law. Although the blogger notes in the video that he does not call anyone to follow his advice and that pay taxes in the country still need, nevertheless, once this movie was in the public domain, the author aimed to teach people how can not pay the transport tax for the car.

So, unlike the previous “teacher” the author of this video offers several ways to relieve yourself from the obligation to pay the tax, and avoid paying fines for traffic violations.

The first option is associated with obtaining the transit numbers. The idea of this Board is based on the fact that if the car is struck off the register in traffic police and she will be issued with transit plates, then it will no longer be charged to the vehicle tax, and it will no longer fix cameras, traffic police and TMS in case of violation of traffic Rules. And indeed it is. But here’s the problem: transit number plates today are issued only in the case of export of the car in the territory of Russia.

For example, transit plates are issued to traffic police, if only to confirm that the car’s new owner is not a citizen of Russia. But the author of the video proposes to make a fictitious contract of purchase and sale, incorporating the information of the person with another nationality.

In the end, after the presentation of such contract of sale on the vehicle you will be issued a transit room. But as you can see, here again not without a fictitious contract of purchase and sale. Presenting it in SAI, you are, in fact, provide a false document with all the ensuing. Draw your own conclusions.

The second option of avoiding the fines and tax on the car, which offers the author of this video, is associated with the cancellation of the registration in the traffic police. To do this, the author of the video is that you can make a fictitious contract of purchase and sale, making it in the “Buyer” field, the data of a fictional person. For what? It’s simple. Making such a bogus document, it is suggested to go through 10 days and to cancel of record of vehicle by presenting to the traffic police left the contract of sale.

We will remind, according to the legislation the new owner must re-register the car in your name within 10 days from the date of conclusion of the contract of purchase and sale. In the end, the traffic police authorities according to the statement allegedly the former owner canceled the account without any problems, and you, according to videoblogger, get a car with no records, but with numbers.

In this case you will drive until the first check of traffic police. But even if you are stopped by you, according to the blogger, can easily evade traffic police, citing the fact that in the end has not sold his car and allegedly go to the traffic police to restore her account.

And now the worst. All the tips that were given in this video is illegal. Many will ask, where is the violation of the law? Like, all according to the current legislation. But it at first glance. View the video carefully. Everywhere in the ways to avoid paying taxes and penalties present a fictitious document. And this is a criminal offence.

Not pay the transport tax and fines: method No. 5

Another way, which offer a videoblogger in the Network, as well as members of many well-known forums associated with the purchase of a new car. Now, recall that, as a rule, when buying a new car, we take out the car without registration plates. That is on the hands we have only the title and the contract of purchase and sale (the deed).

In the end, according to the administrative regulations of the Ministry of internal Affairs of the Russian Federation after buying the car the new owner has only 10 days to put the car on the registration. Otherwise, according to law, a fine for delay in registration of the vehicle.

What is offered online advisers to their readers and subscribers? But to simply rewrite the contract of sale and purchase of the new car, indicating a new date of purchase of the machine. In the end, it entitles car owners to drive without a vehicle registration for another 10 days. And indeed it is. None of the employee of traffic police will forbid you to drive without license plate if I see that you have only recently bought the car (not period has passed since the purchase 10 days).

But, as you know, this advice from the same series. Yet again, we are invited to make a fictitious contract of purchase and sale.

How to pay fines: method No. 6

Here are two another clip from the “geniuses” unclear what (only, of course, not law) that claim to have come up with a way not to pay fines. So these two videos are completely different in the picture but they are United in common – sense, or, as they call it, a way not to pay fines for traffic violations.

These two counsellors from the Network suggest simply not to pay the fines, which sooner or later will be cancelled. The idea is that the bailiffs don’t usually mess with small fines and eventually just cease to carry out any actions on their collection. And as soon as the materials of the case on unpaid fines come in the FBS.

But, unfortunately, one blogger in his optimistic video does not mention responsibility for non-payment of fines (though not, mentioned, but not fully, forgetting about the measure of responsibility, as the arrest).

The second is told in detail, what the responsibility is, if not timely pay a fine for a traffic violation, Recalling that provided for in article 20.25 of the administrative code, for which the defaulter faces a fine of double the amount of the previously paid fine or even arrest.

Nevertheless, the author of the video, elaborating its subscribers about the article 20.25 of the administrative code, for some reason referred to the fact that in most cases, bailiffs do not use this article. So, according to him, the fines can not pay.

Further, according to the legislation, after the statutory time limit (Statute of limitations penalty for an administrative offence) you, no one will be able to attract to administrative responsibility. Then unpaid fines will remain in the database of traffic police, and in the future will disappear and there.

In no case do not listen to these would-be teachers posing as lawyers or have decided to play Internet lawyers. First, for non-payment of fines within the statutory period, you could face liability in the form of the penalty in the double size or arrest for a term up to 15 DAYS!!!

Yes, of course, the bailiffs manage to pay all outstanding fines. Nevertheless, the collection period outstanding fines is increasing each year, as the work of the FSSP becomes more effective.

Also recall that the Protocol on administrative offence for untimely payment of the fine for violation of traffic rules should be the traffic police or the MANAGEMENT (in case if the fine came from the cameras of the organization) that they are doing fine in recent years. So don’t expect that if you don’t pay the fine, forget about you. Yes, there is such a possibility, but it is small.

Also, do not forget that buy unpaid fines is fraught with even greater problems. For example, the bailiff can block you all the Bank account and to prohibit travel abroad, if the amount of your debt, traffic will exceed 10 000.

You can continue indefinitely this topic. Videos online on this account are a dime a dozen, as well as those in various forums. But one thing we would like to say that most councils in the Network are connected with violation of the current legislation, and often advice – with criminal offences. Therefore, we do not advise you to listen to the advice of “teachers” who can let you down at the monastery.

Better follow the law and not break, so you do not regret the money on fines. Good luck on the road!