This is what happens when a defective tire explodes in car

That’s why every owner should monitor the condition of the rubber.

This video was shot in Maryland, USA, at the gas station. Here is an example that the tyres of your car should be treated tenderly and to monitor their condition, not only to occasionally check the pressure in them. Also this video is a perfect example of that before pump wheels it is necessary to check pressure with a gauge in them.

In the video we can see how the driver decided to pump up the right front wheel of his sedan Ford Focus. But suddenly the wheel explodes, severing the right wing machine (and insulating material), sending him into space (in fact, the wing flew to the tree).

Please note the owner of the car, which visibly shocked not only seen, but heard. The fact is that, judging by the fact that the driver squeezes the ears, they suffered from the shock of the sound wave caused by the explosion.

According to tanker filling stations, the driver of the Ford Focus arrived at the gas station to pump up the right wheel of the car. On this wheel tanker saw the tire partially off the drive (apparently, this happened due to the movement in run-flat tire).

In fact, the owner of the Ford Focus was lucky, since the explosion he has avoided serious injuries. But it could be much worse.

The fact that the car from the shock wave of the blast tore off the metal wing, which then was discovered in a tree near a petrol station on the 7-meter height.

Here is a picture of the wing of the car: 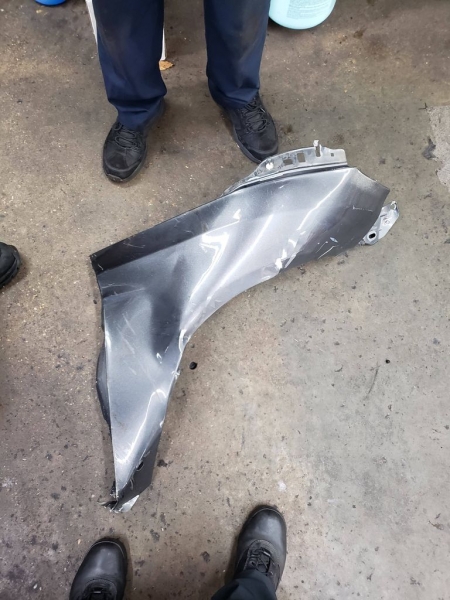 Judging by its deformation, the force of the explosion actually threatened the driver. If the man in this video would replace the damaged tire for a new one, instead of trying to pump pressure into it, probably this incident would have never happened.

So this video is a warning to motorists who drive on the damaged tires. We therefore recommend that you replace any worn, defective and damaged tyre on your car for a new one unless there was something serious.