As “British” and “German” has survived in war-torn Western Sahara 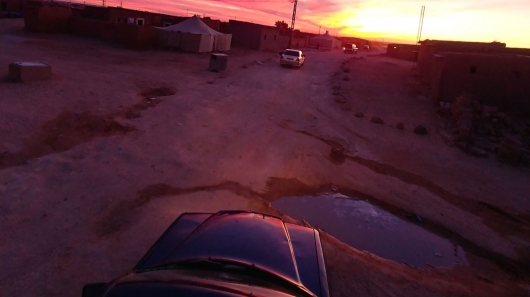 Since 1975 in the Sahara desert (48 kilometers from the Algerian military Outpost of Tindouf) there are several refugee camps. They are home to approximately 165 000 people — they are waiting for the fulfillment of the promises given to them by the international community.

This is the UN agreement on ceasefire, signed in 1991. His goal is to put an end to the civil war that erupted in Western Sahara. This territory, which was under the rule of Spain, which today is called “the last colony of Africa”.

From 1975 to 1991, the liberation movement and war front in Saharawi fought against the Moroccan military occupation and the second “colonization” of these areas. The king of Morocco gave the order of 350,000 Moroccans to seize the territory. Then began one of the longest and most intractable military conflicts in the world. 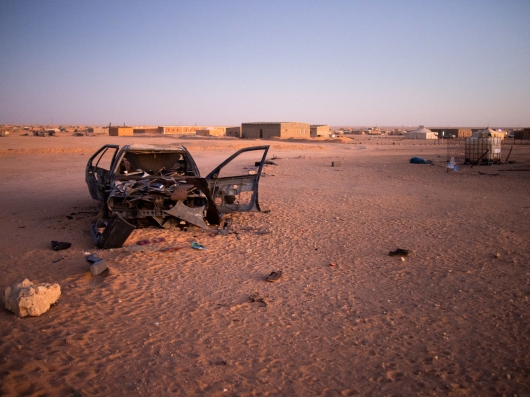 In 1991, the United Nations signed an agreement on a cease-fire. His goal is to end the violence, to organize and conduct a referendum which would determine the future of the former Spanish colonies. The agreement also provided for the establishment of a UN body to monitor the referendum.

After more than a quarter of a century the people of Western Sahara are still awaiting implementation of the agreement. Obstacle to its implementation was the political vicissitudes, which brought the negotiations to a standstill, and a complete lack of global understanding of the whole horror of the situation. 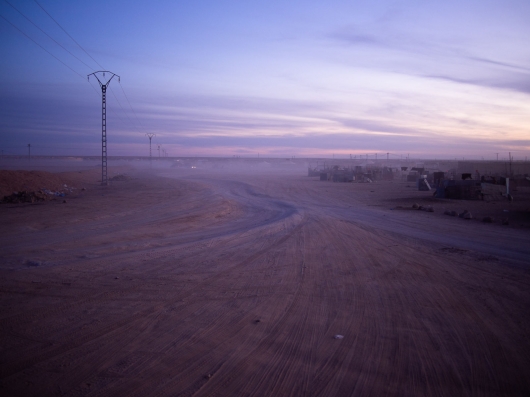 The Sahara desert is also ruthlessly applies to cars as to people. Refugee camps, existing for 44 years, became something of a natural experiment to test the strength limits of the car. In the arid Hammad receives only 5 millimeters of rain per year. The rain usually runs 1 time and turns into a flood. The summer temperature reaches 51 degrees Celsius, and the wind is so strong that rips roofs off of houses of mud bricks, carrying tons of sand.

Refugees are forced to buy contaminated fuel and oil for vehicles, which affects the technical characteristics of vehicles. And in General the machines are working in extreme conditions of the desert, so the whole camp scattered their metal skeletons.

The specifics of the automotive market of Western Sahara 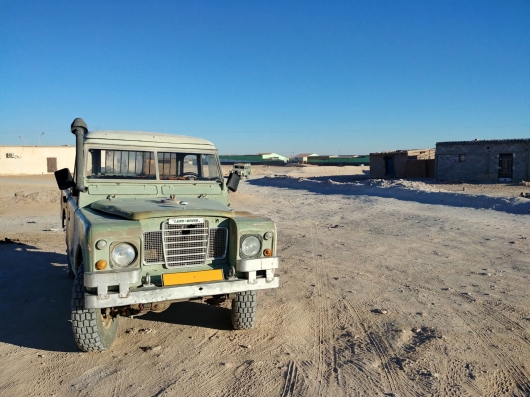 Here prized cars that can be repaired using standard plumbing tools. They should not be stuffed with sophisticated electronics, which requires the use of specialized equipment. Technical reliability in the Sahara is not determined by the number and frequency of breakdowns, and the ability to quickly fix them on the roadside. 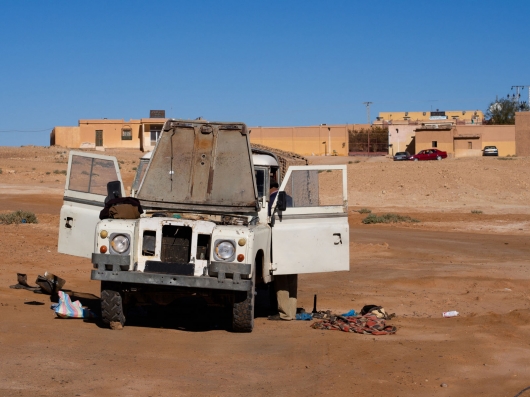 Extreme climatic conditions, lack of infrastructure and modern repair facilities have formed specific requirements for the cars. There are high priced models, is able to ride on the blurry, dusty sandy roads. No matter the design, the composition, the presence of the electric Windows or multi-function infotainment system — key operational endurance, the ability to quickly remove broken with a simple tool.

In this competition for survival that takes place in one of the most inhospitable places on the planet, there are two clear winner. The undisputed kings of the Sahara became the Land Rover Santana 1970-ies and 80-ies of the issue as well as their “relatives” from the series III.

These old men remain functional, cost almost $ 5,000. It is for the refugee camps present condition — the same amount the locals who are lucky enough to get a job, get in 2 years. 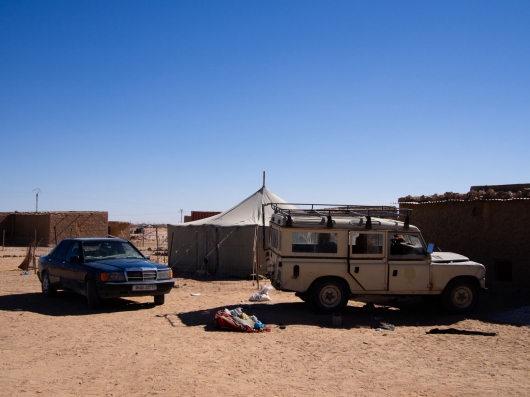 Suddenly the second place was occupied by sedan Mercedes C-class issue of the early 90s. Especially sought after models 180E, 190E, 200E and E320. As a rule, German cars have an interesting interior design is a multi — colored capes made of materials of unknown origin on the seats, the dash and no door panels. 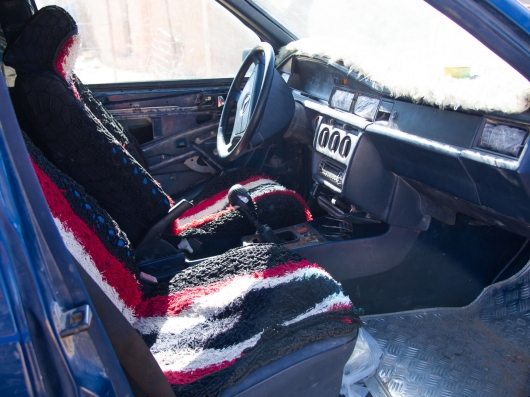 But the engines of these cars can withstand the unbearable climatic conditions, easy start. Suspension overcomes the uneven dusty roads. But the main advantage is the ability to quickly resolve arising technical problems. Therefore, older models are highly sought after in Western Sahara. 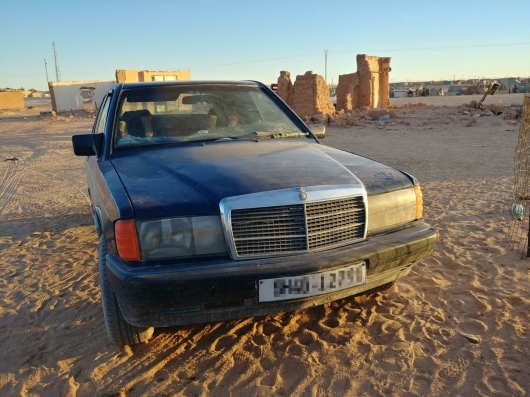 The cost of modifying a gasoline engine averages $ 3,500. Diesel engines are considered more practical and reliable, so the cost of vehicles equipped with such units rising to 5000-6000 dollars.

The way to Western Sahara

Hardy vehicles are purchased in Spain with Spanish enterprising Saharawi technical passports, travel to the Algerian port city of Mostaganem. Upon arrival they are distilled in a refugee camp, overcoming 1609 kilometers of the desert road. 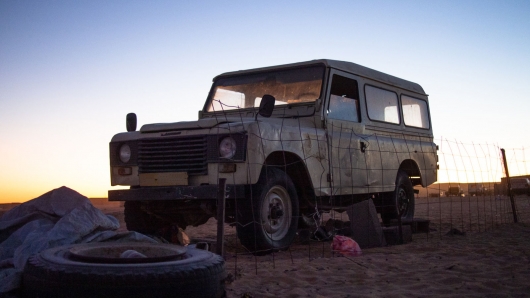 Attempts were made to organize the delivery of other vehicles with the Spanish market. But there were no more models that would be able to survive in extreme climate and primitive conditions of repair and service. There is an obvious and remain the only winners of Land Rover and Mercedes C-class. 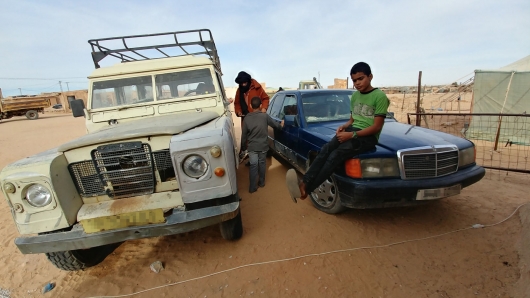 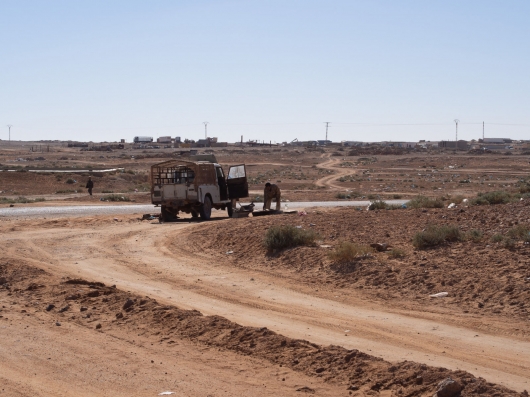 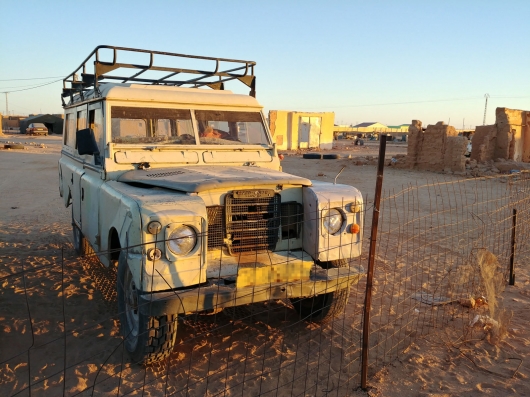 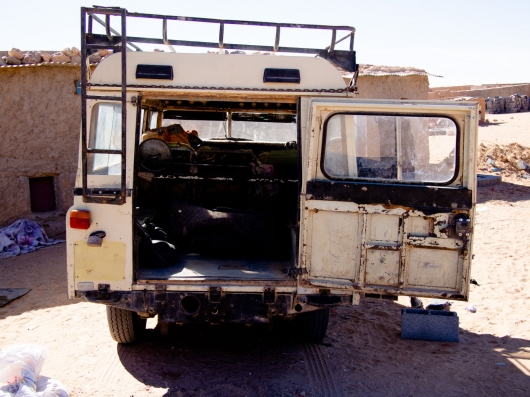 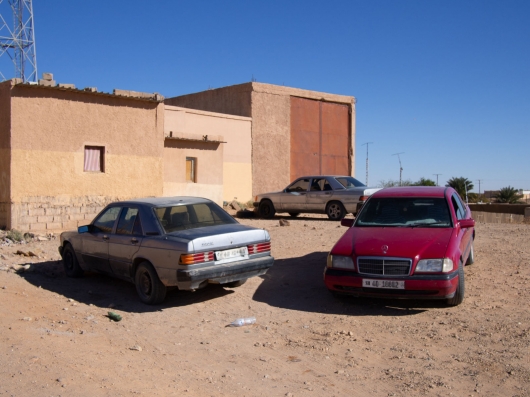 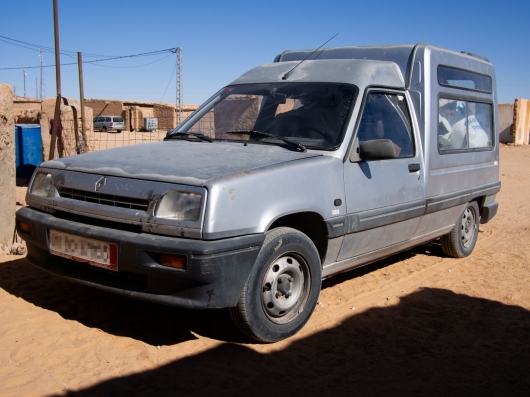 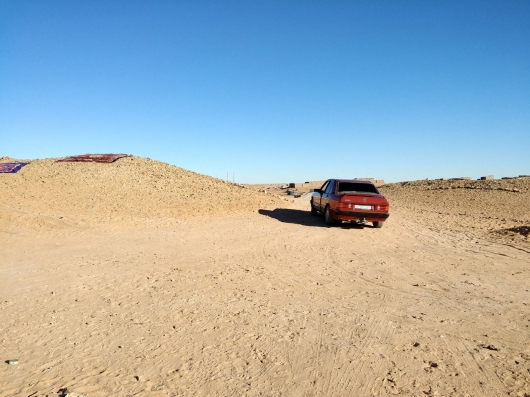 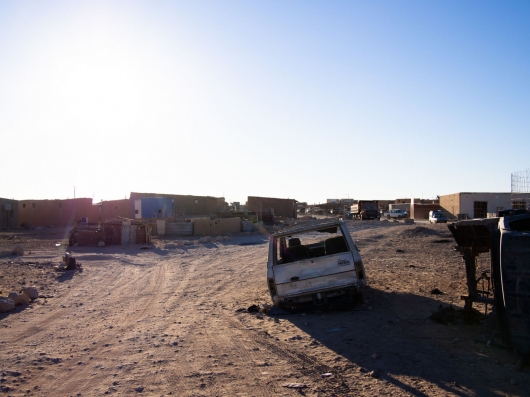 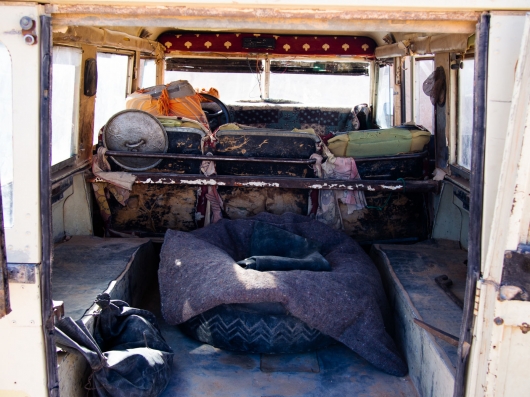 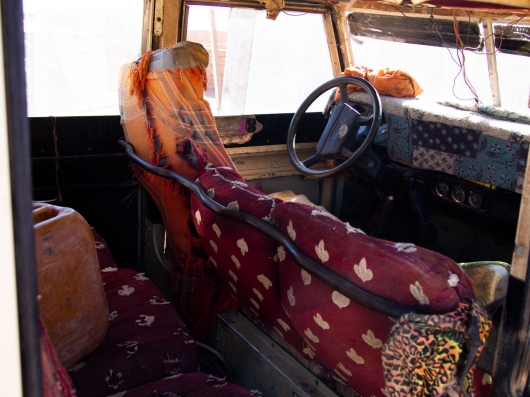 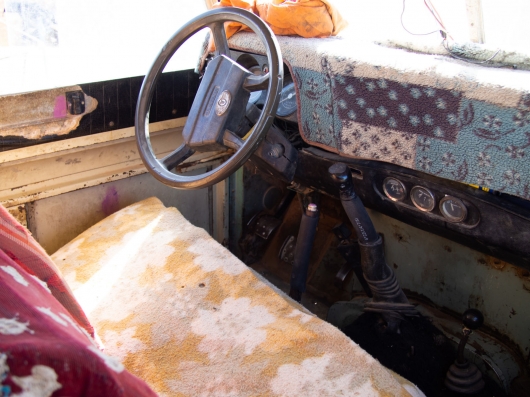 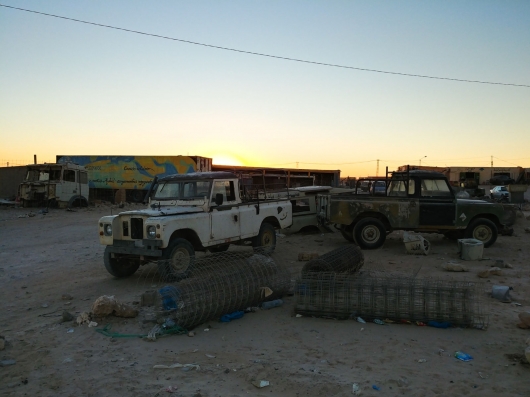 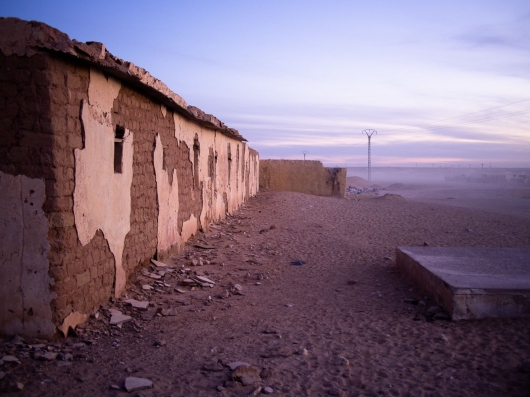 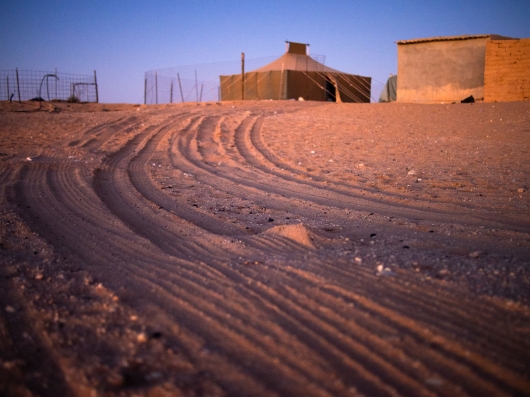 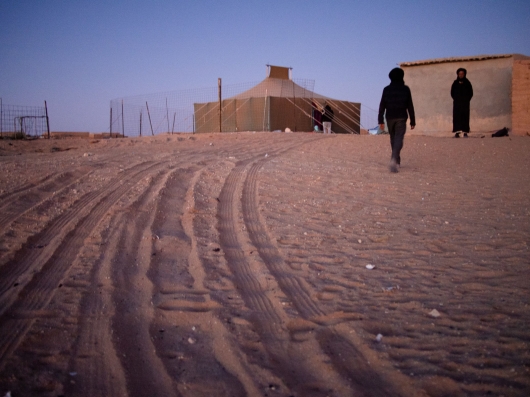 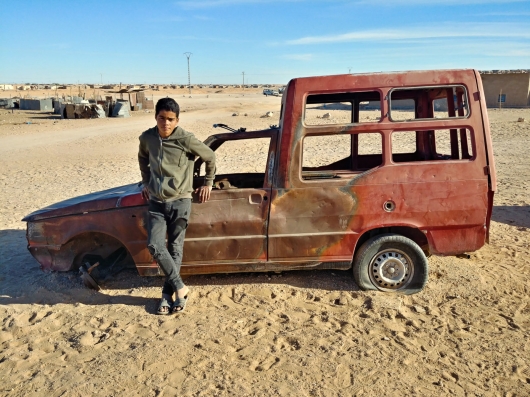 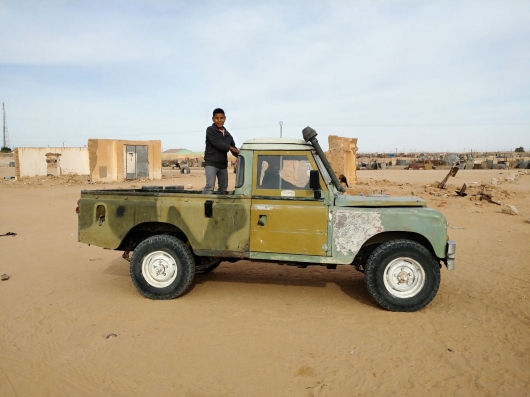