The most technologically advanced engines from BMW, Mercedes and Ferrari 2018

The new inline-six BMW (2018) and its competitors 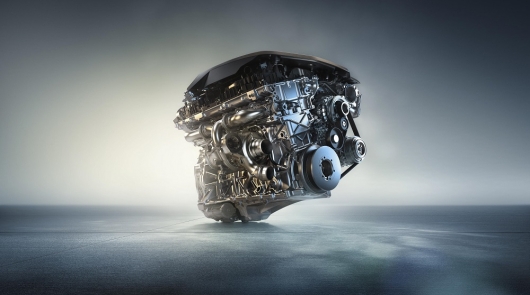 On the 27th Aachen Colloquium on engine technology of the BMW group not only answered all tricky questions of journalists, but also unveiled its new straight-six gasoline engine.

Powertrain under the internal item number “B58” was recently presented in Aachen. The petrol engine is a new offshoot of the “Next Generation”, the fourth turbocharged six-cylinder engine of the brand. The engine will be offered in two power levels: 250 kW (340 HP) average (ML) and 285 kW (388 HP) at the upper power level (OL).

Despite the redesign, the engine retains the basic elements of its predecessor, such as the volume (2.997 CC) and cylinder diameter (82 mm). They are identical to the earlier version. The main innovation is mostly about the weight: the engine was six pounds lighter. Two pounds lost block, two pounds removed from the cylinder head, and again two kilograms was saved by a chain drive. 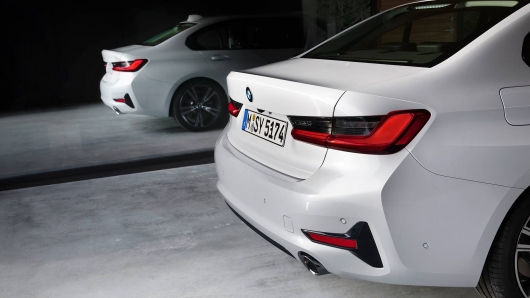 In addition, BMW has optimized individual components designed to improve fuel consumption. The saving effect is achieved through the use of new injectors with an injection pressure of 350 bar and a new engine control unit.

The main goal in development, was a combination of more power and torque with less fuel consumption. But it was not less important direction of engineering work to fit the motor in the maximum number of models, as well as to make a unified engine.

In this regard, longitudinally mounted engine benefits from BMW previously submitted in 2017 three – and four-cylinder transversely installed power units. Since it is a modular engine, six-cylinder engine also captures some part of the compact models of engines in the BMW lineup. Thus, in OL six-cylinder version gets the pistons OL-cylinder engine. A less powerful version uses elements of its predecessor. 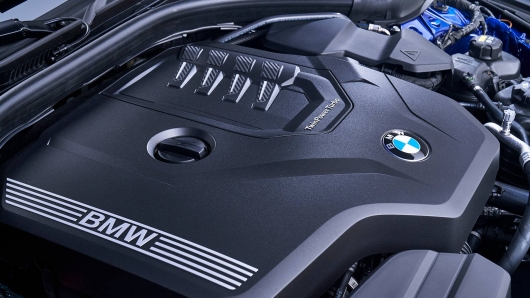 Obviously, the biggest difference from its predecessor was the exhaust manifold integrated in the cylinder head. A modified technological approach should save about two pounds of weight.

In addition, the cooling system on the B58 is also new. For the first time BMW is betting on a “split-cooling” system: the engine gets two refrigerant circuits, one for the engine block and one cylinder head. The advantage of this design is the optimal cooling of each of the major parts of the engine. This increases the overall efficiency of the engine and thus reduces fuel consumption.

To ensure uniform heating of the cylinder liners in the lower part are of larger diameter than the upper half. This should have a positive influence on the deformation of the cylinder when heated. The conical shape of the cylinder itself is geometrically compensates for the thermal deformation. Collectively, this reduces friction, which in turn has a positive effect on fuel consumption. The crankshaft was also redesigned: changing the position of counterweights made the unit quieter.

The engine with the new year replaces the predecessor

BMW X5, 8-I model, the Z4, the new 3-Series and X7 will be available to enter the market with improved six-cylinder power unit. The current model will also benefit from the installation of the modified engine under the hood of a new car model years at the current collection of 7, 5 and X3-Series 2019 will also see a technological novelty.

New from BMW – only part of the updated range of engines. The engineers at automotive companies are constantly working on innovation. Let’s look at the most interesting options in the last few years: 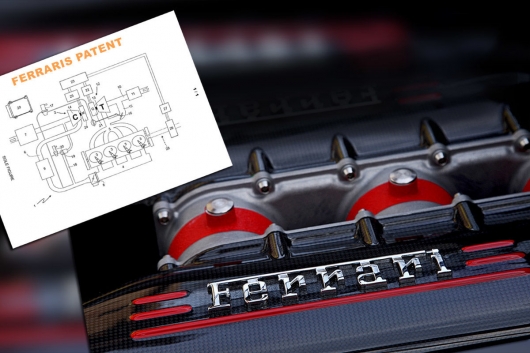 Ferrari is working on a four cylinder engine with an electric compressor and the control unit rotation speed of the turbine. Separately, engineers studied the possibility of setting the desired tone and intensity of the work of the exhaust system to the small volume of the motors sounded like before powerful and recognizable brand. 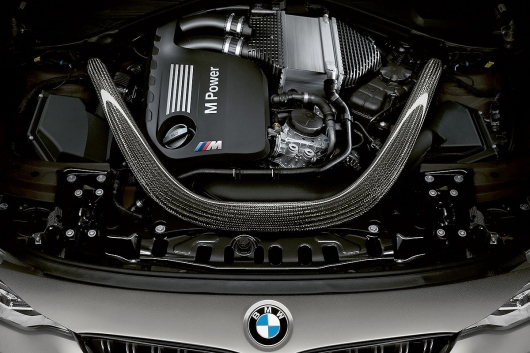 Rivals technically augmented powertrain of the BMW you can safely burn a previously created version of the Bavarian motor S55. The same inline six-cylinder S55 engine from 2014 has been placed on the “M”version of BMW. 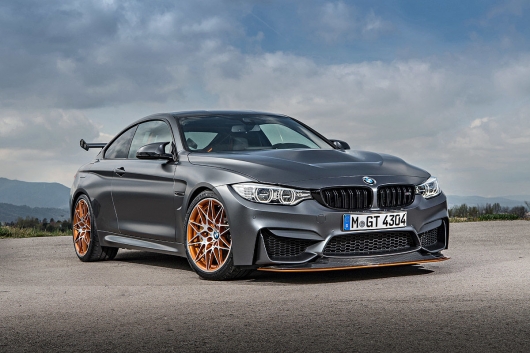 If you do not consider the BMW 1-Series M Coupe a thoroughbred “M”models, please note that this version of the motor you also can find under the hood M2 Competition power of 410 HP twin turbo in the sport version of the M4 GTS engine power to 500 HP with two turbos, but working on the classical scheme of air injection. 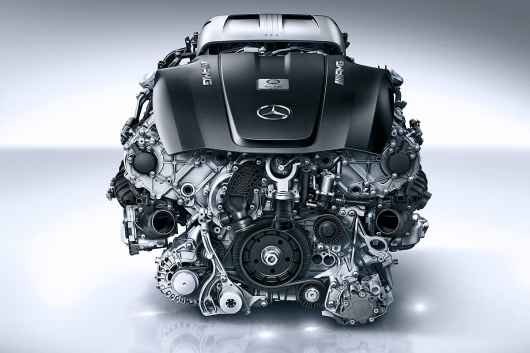 After the presentation Mercedes-AMG GT in 2014, sabzi also introduced a new engine. The 4.0-liter V8 Biturbo – internal production code: M176 / M177 / M178, since then, replaced the previously common 5.5-litre V8, thus causing a trend to reduce the dimensions in all of sports Mercedes models. Initially, the engine was designed for 510 HP, now the options with the capacity to 639 HP for models such as the AMG GT S. 63 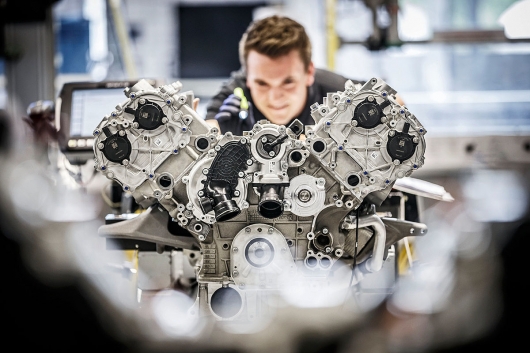 Each 4.0-liter Biturbo V8 is assembled by hand. 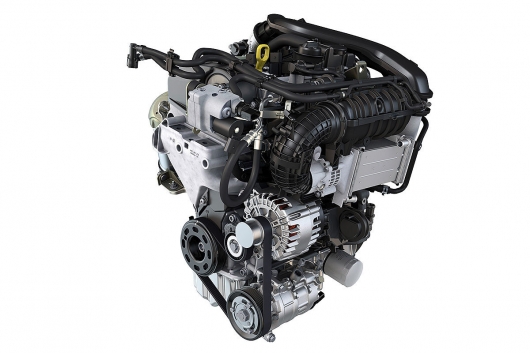 Despite the lack of high capacity, the motor is notable for the technologies that allow him a small amount to get 130 HP, but spend at the same time on 1 liter of fuel less than in the previous version. 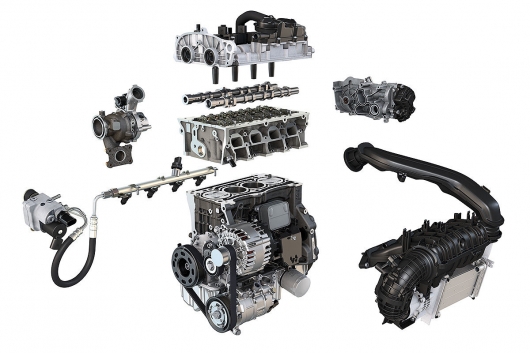 The engine is particularly effective due to the combustion process of Miller, which is used in Volkswagen from 2016. According to the work cycle, the intake valve in the cylinder closes earlier than usual. A turbocharger with variable turbine geometry (VTG) compensates for the missing quantity of the mixture. In this case, the pressure in the cylinder should rise faster due to less time the valve is open. The Miller process also provides a higher degree of compression. In the new TGI it was increased to 12.5: 1. 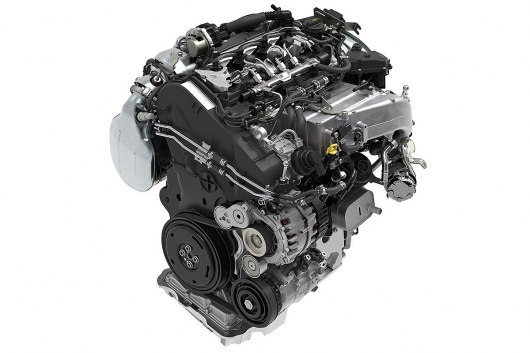 The new EA288 2.0 TDI evo will be the first diesel hybrid engine VW. “Hybridization” has become possible thanks to the new belt drive the starter-generator. The diesel engine uses a 48-volt system is 12-volts, supplemented by a lithium-ion battery that is charged by energy recovery during braking.

The two-litre diesel comes in two power classes. In the lower class, the capacity of the unit ranges from 136 to 163 HP, the second, call it upper class, the power can reach 204 HP

Entering the market in 2016 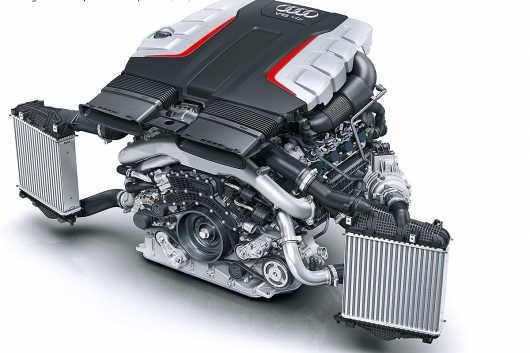 New SQ7 Audi brings the maximum benefit from the first electric compressor (EPC) installed on a production car, with it prestigious diesel SUV forget what “turboyamy”. EPC is located in the path of air downstream relative to the intercooler and has a maximum capacity of 7 kW. In order to meet the high requirements of power and energy, it has its own 48-volt lithium-ion battery for 470 WH installed under the trunk. 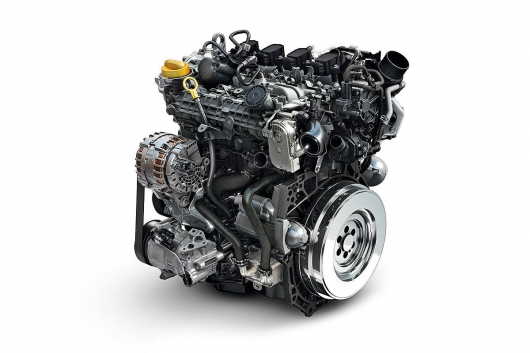 Renault announced that in cooperation with Nissan and Mercedes in 2017 there is a new four-cylinder engine with direct injection and turbocharged, with a volume of 1.3 liters. Know-how from Nissan in the development of a sports car plays a crucial role here. The new unit will receive the same coating of cylinder liners, like the sports car Nissan GT-R.

As a result, considerably decreases the frictional resistance between the piston rings and liners. Another advantage is that the coating becomes significantly thinner, which should ensure better heat dissipation. 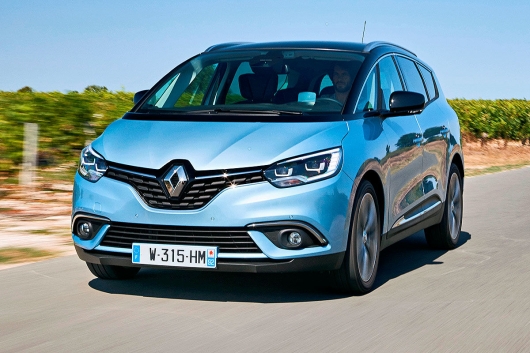 The power range extends from 117 to 162 HP Powerplant is the technical basis for engine TCe 115 And TCe TCe 140 and 160. The device is already available in the models “Scénic and Grand Scénic”. 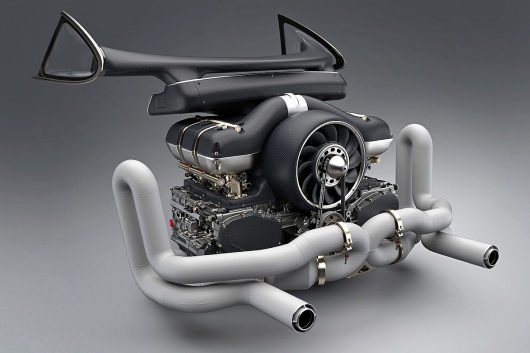 Singer Vehicle Design has teamed up with Williams and Hans Mezger to unusual work. The American company last year offers tuned four-liter boxer engine delivering 500 HP Choice for “boxer” in 2017 was 3.6-liter six-cylinder boxer engine from the Porsche 911 (964) 1990 release in which initially sealed “only” 250 HP

An interesting project from a technological point of view modifications. Modification of the guard of the engine include:

install the cylinder head with four valves per cylinder;

installation of two injectors per cylinder; 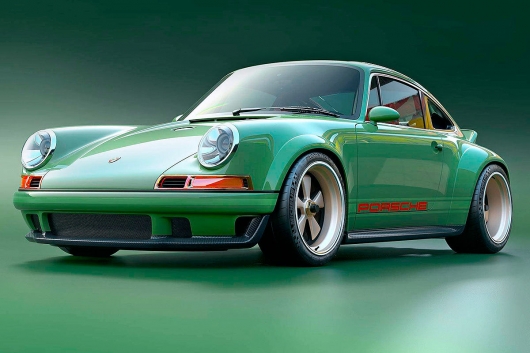 Fully restored Porsche 911 (964) was produced in a limited edition of 75 copies. It was invested not only a lot of time and effort, but also added a lot of carbon, magnesium and titanium. 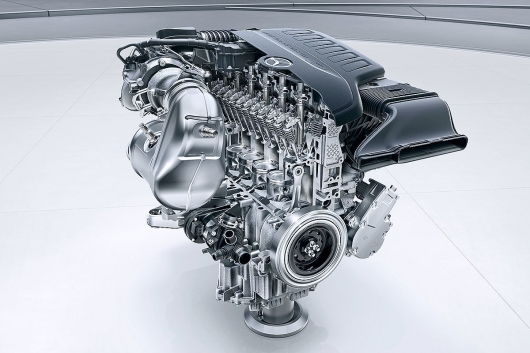 Mercedes again took up inline petrol and diesel engines. “M256″the engine went from standard drive system steering, alternator, pump and compressor air conditioning system. Instead, all the accessories is driven by an electric 48-volt system, which received the brand name “Integrated Starter-Alternator (ISG)” in which the starter and generator are combined in a single unit. 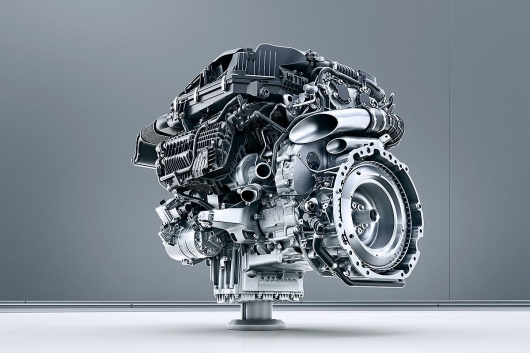 The three-litre engine already used in the S-Class.

Mercedes thinks about the return of their iconic inline motors: what’s the advantage? 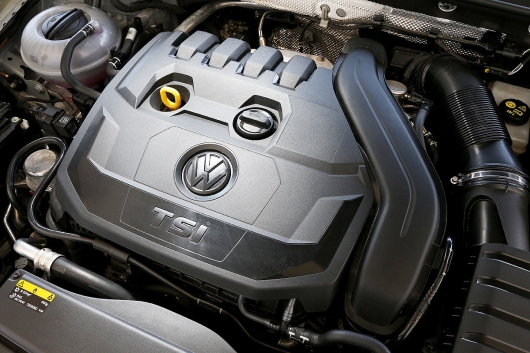 The most economical and environmentally friendly four-cylinder gasoline engine TSI, which you can imagine under the hood of a Volkswagen. First, Evo 1.5 TSI Bluemotion will be equipped with robotic gearbox DSG. Second, to reduce harmful emissions and improve efficiency 150 HP motor will get an improved automatic shut-off function for the drive is coasting at speeds up to 130 km/h.

For restarting the engine after the cruise with a stalled engine, VW uses both the starter and the clutch gearbox DSG. Depending on the traffic situation one of the two elements of the design assumes the restart of the motor or both together. 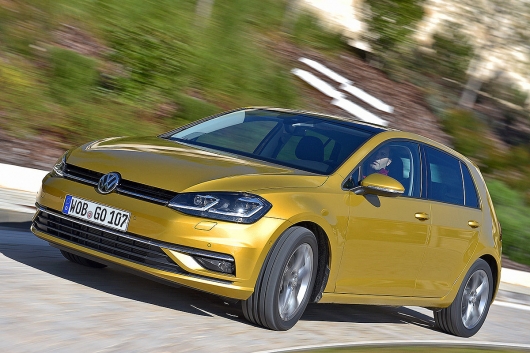 By the way, Volkswagen dispenses with the use of 48-volt power supply for my “mild” hybrid system. Instead, classic the car’s electrical system to 12 volts is completed by a small lithium-ion battery. 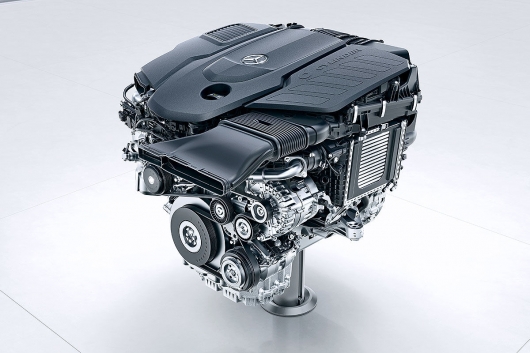 With motor 2017 OM 656, Stuttgart completes its range of diesel engines for new inline six-cylinder model. Mercedes mixes the materials. The crankcase is made of aluminium, pistons made of steel. As one of the advantages of steel pistons, Daimler engineers describe their lesser heat expansion during operation. This creates greater clearance between the piston and the cylinder walls that reduces friction by up to 50 percent. 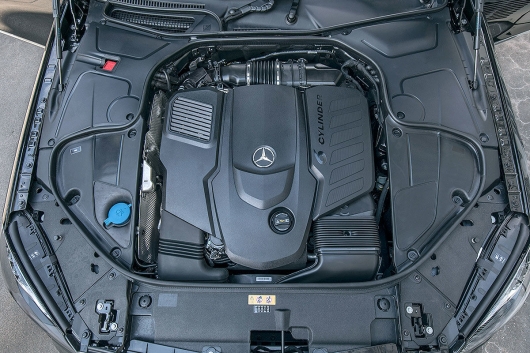 Another feature of the new piston is a form of combustion pockets. At OM 656 they have a stepped shape. According to Mercedes, this should have a positive impact on the combustion process and reduce the amount of soot in the engine oil. 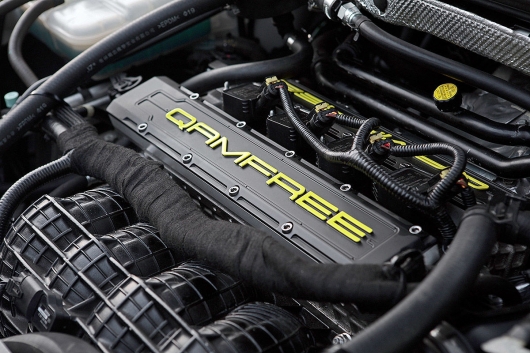 No more problems with timing belts and chains GRM: Christian von Koenigsegg and the company Freevalve completed work on the drive without the camshaft, which lasted for 17 years. Jointly developed engine replaces the conventional camshaft the camshaft on hydraulic-pneumatic system with electronic control. This makes the engine more compact, more powerful and much more effective. 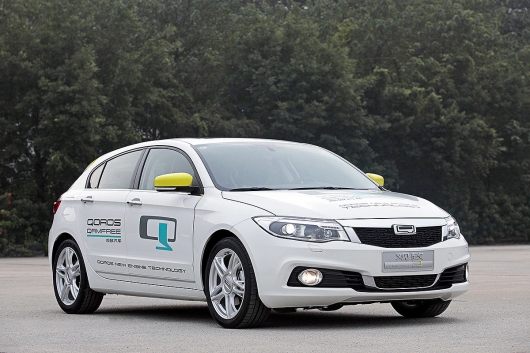 The technical approach is impressive: the system dispenses with the camshaft timing belt and the throttle and it works fine with a normal injection into the intake manifold. Engines Qamfree in the work even smoother than the standard internal combustion engine because of the reduced number of moving parts. Also, they make a characteristic hissing sound of the intake.

1.6 liter engine without camshaft from the Qoros 3 develops 230 horsepower 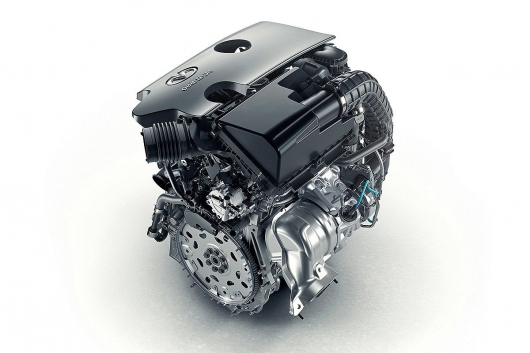 Nissan premium brand Infiniti launches VC-Turbo – first on the market production engine with a variable compression. The unit is a two-liter turbocharged engine with direct injection and four cylinders.

The technology of variable compression, or if you want a turbocharged engine with a variable compression ratio, can almost instantly change the pressure of the piston on the fuel-air mixture in a ratio of from 8:1 to 14:1, while offering highly efficient compression at low loads (in the city, for example, or on the highway) and low compression required for turbines with a sharp acceleration, a maximum throttle opening. 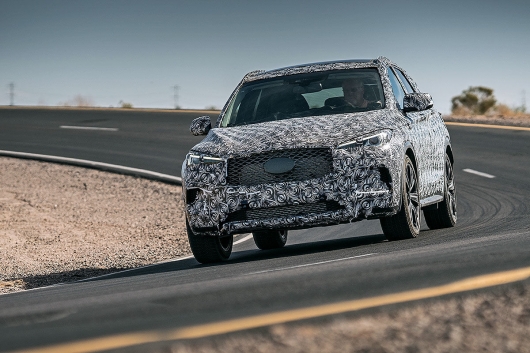 Her work leads to an offset that varies from 1970 to 1997 cubic centimeters. The new engine is the first to be used in the new QX50. He later be transferred to other models. 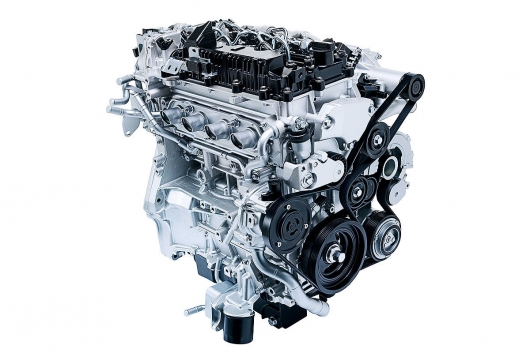 Under the hood, installed a new gasoline engine “Skyactiv-X”. There is a lot remarkable. For example, the motor is equipped with the ignition system of a Spark-Controlled Compression Ignition (SCCI).

Technology will continue to evolve, making new “Three” a leader in the development of a unique and revolutionary technology which will allow in the future to make an almost perfect ice, able to provide instant combustion with the effective heat transmission and friction of near zero.

The whole point of the new engine SkyActiv-X from Mazda