Alessandro Zanardi – Paralympic athlete who won several gold medals, two-time champion racing series CART 1997-98, four-time champion of the Paralympic games 2012 and 2016. In his honor, was named special edition Acura NSX. Because of an accident in a race many years ago, he lost both legs:

“September 15, 2001 in the race on the track Lausitzring in Germany, Zanardi was in a serious accident. Leaving the track after the pit stop, Alex was on cold tires too early, accelerated and lost control of the car. His car launched across the track. In the next second, he crashed the car of canadian Alex Taliani. Reynard Italian cut in half. Doctors later were forced to amputate both legs to the knee”, the Internet encyclopedia Wikipedia.

Someone will say – a poor man with a complicated fate, but if you look at the result on the other hand, Zanardi can be called a large lucky. He not only survived the terrible accident, and received such severe injuries and lost almost ¾ of the volume of blood, but recovered, and continued to do his favorite thing, continuing to compete at a professional level. The driver was not disappointed in life and not scared and not thrown favourite business. On the contrary, he had new victories and achievements. 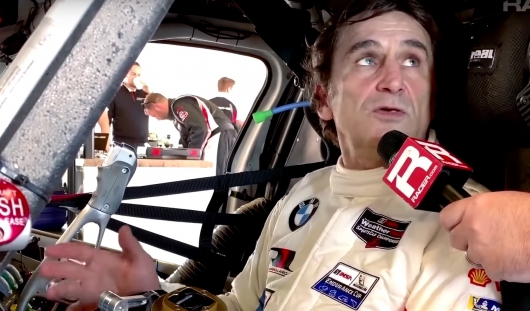 To cope with the powerful cars today, it uses a special manual operation on the steering wheel of his race car.

Video from the magazine Racer Magazine talks about how Zanardi today manages its BMW M8 GTE. As recognized by the racer, it’s not easy, but the difficulties he’s just not thinking, focusing on your big goal.

If you were sure that part in the races, the Daytona 24 hours is a difficult task, now just try to imagine what it’s like for Alessandro Zanardi. Never give up!