The beauty of the rusting bodies: pictures of car abandoned

There are the wilting of the cars beauty. Avtozavodsky from all over the world 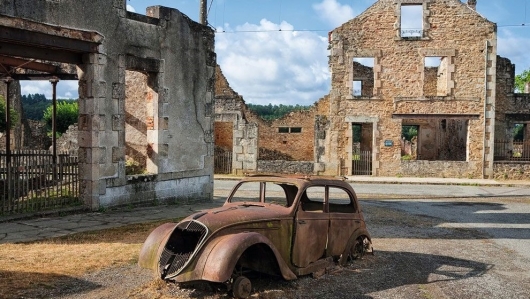 The art is sometimes very contradictory. In his perception is extremely important, as the viewer looks at the reality, it will depend on whether he likes the object of creation or disgust.

The most interesting thing that art can do anything. What can we say, in the 60s years of experimenting with the arts of chimpanzees and other apes, with their scribble on the canvas too, it is considered art. …

The same can be said about any kind of automobile sabroso. On the one hand, you see this on the street – turn away, all rusty, dirty mess. But the man with the camera – clicks, and now have a rusty piece of junk there is some charm. He immediately becomes beautiful in the eyes of the viewer. 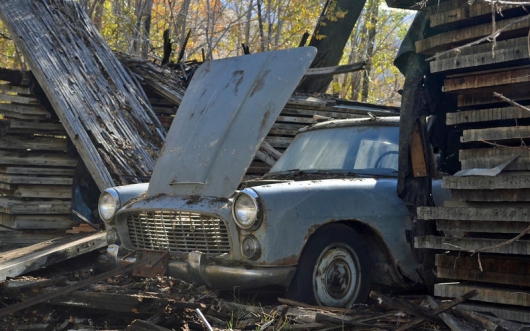 We have assembled a gallery of original photos depicting abandoned cars around the world let us together turn this unusual collection. Can rot among these machines is the potential exhibits for the Museum? 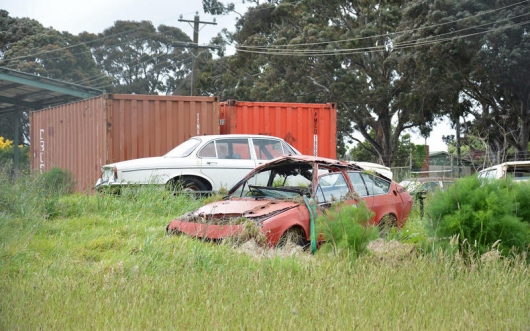 Thrown model Alfetta GTV serves as a reminder of what Alfa Romeo really used poor quality steel when creating their cars in the 1970-ies. The picture also illustrates the damage being done to the humid climate of the Australia the vehicles. 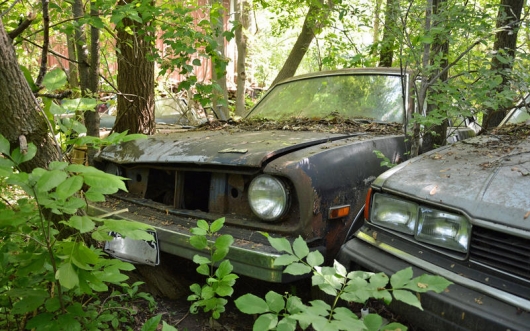 Marina has earned the dubious honor of being the last car that Austin was trying to sell in the US, before you ever throw a futile attempt. The latter came to the United States copies now live his life like this. They say they have no more than 25 pieces. 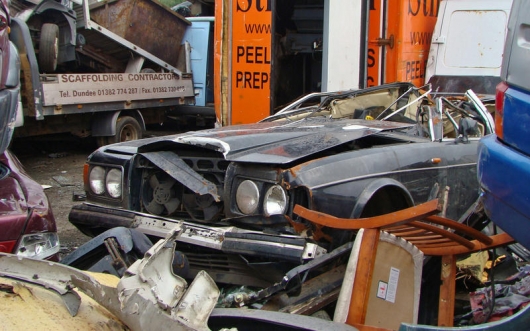 Prestige, history and the ingenious technology of the past years can’t save the car from the junkyard. Dumped into another world and this Bentley. 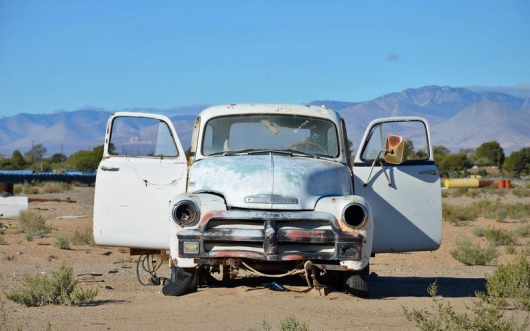 What kind of refrigerator is in the middle of the desert? And, no, it’s not the fridge, and the Chevrolet pickup truck of the late 40-ies of the issue.

After 70 years, a large number of such trucks scattered in the fields, deserts, and sheds across America, adding authenticity to the atmosphere… 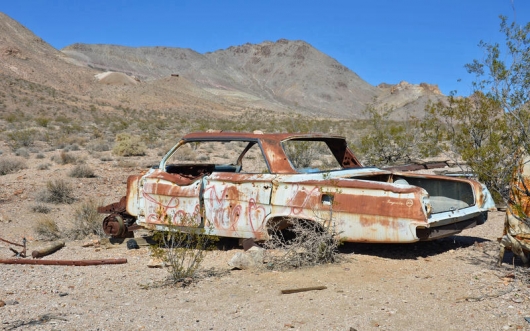 In the desert there are also classic sedans. As you can see, even in a dry climate, these cars rust. 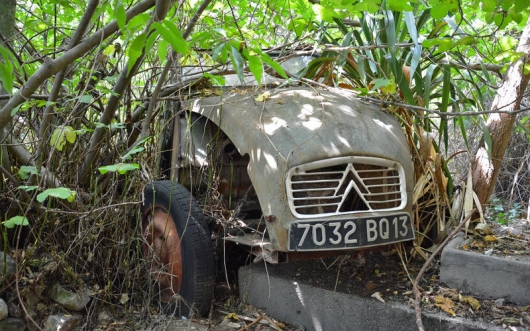 The European surroundings with a Citroën 2CV in the title role. By the way, say from 2010, the year these old cars has grown significantly. There is an option to find one and restore. Good money to the right buyer. 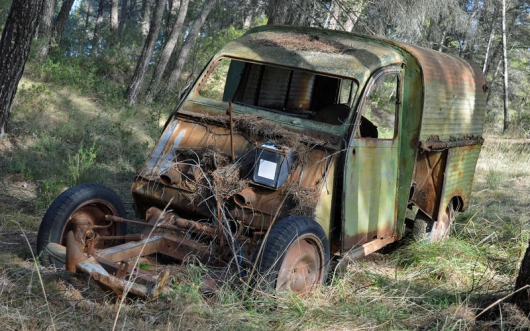 Signed by hand a sequence number talked about the fact that Citroën 2CV AZU was produced in 1955. The first years of his life this “Frenchman” from horror movies (at all the American killers in the movies was somehow similar vans citroën) transported the goods of the same chemical. lab.

Probably, in the end, the firm has sold a local farmer, who hid him from sight, when the truck fell into disrepair. So is the old woman in the woods. 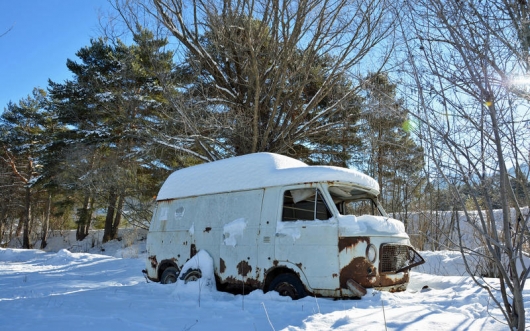 In Europe commercial vehicles usually dominate their domestic market. More often you will see vans Fiat in Italy than in France. Vans Ford reign in the UK and vans Volkswagen law in Germany. This Fiat 238 began its life in the 1960-ies, supplying the cylinders with natural gas in the Italian Alps, but later switched to the French side of the border. Over the years it ate alive by road salt. 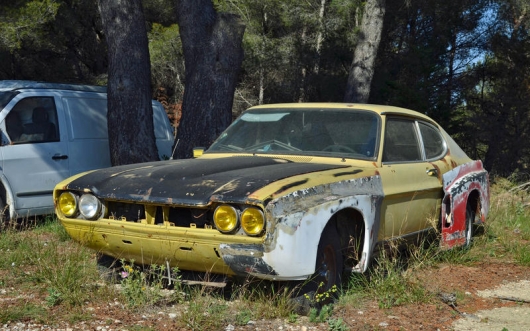 Ending their days in the Sunny South of France, this Ford Capri RS 2600 looks like a racing project car that someone started but never finished. 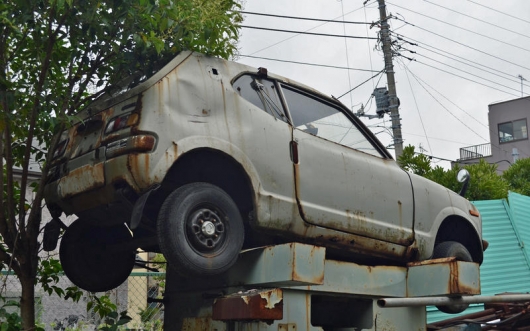 Find hackneyed by time and weather, Honda Z hard even in Tokyo. Especially in this metropolis space is a very expensive luxury. Probably that is why it was such an unexpected opening to see the car on the eternal joke in this photo. 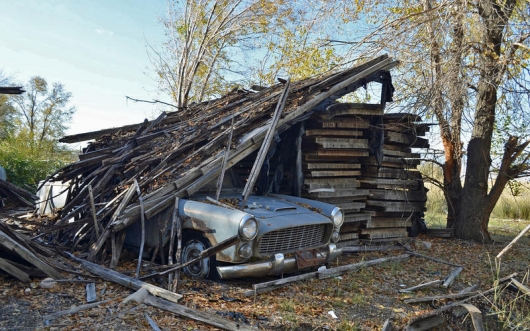 Sometimes even experienced re-enactors are not able to determine how bad the condition of the car. In an example, the model Lancia Flaminia. On a farm in the United States was already five such cars. But when the buyer received permission to pull out all five copies from the pits and from under the debris, it turned out that they killed so that their recovery is impractical. 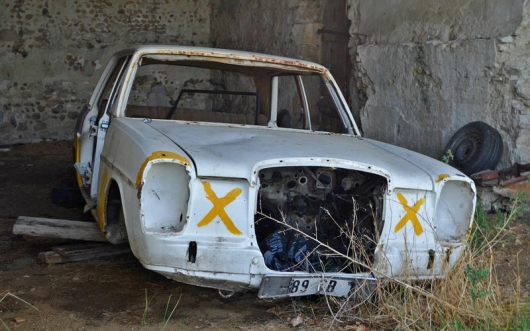 German business classic: Mercedes-Benz W115. This copy hails from the 1970-ies, apparently was abandoned not so long ago, and he survived very well. Perhaps that is why the car is promptly pilfered for parts, as soon as the opportunity presents itself. Everyone wants high quality spare parts for your Mercedes. The photo was taken in 2014 in France. 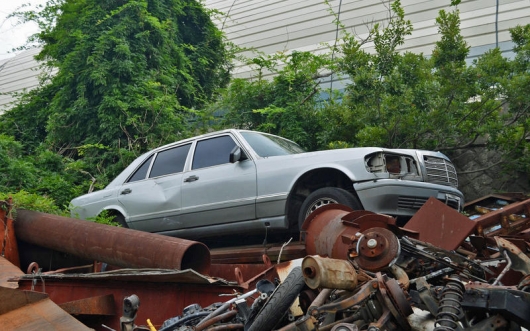 Slightly more recent classics of the late 1980-ies of the Mercedes – Benz W126. A meeting place with these cars have long become landfill. So this beauty went to be scrapped at Tokyo. 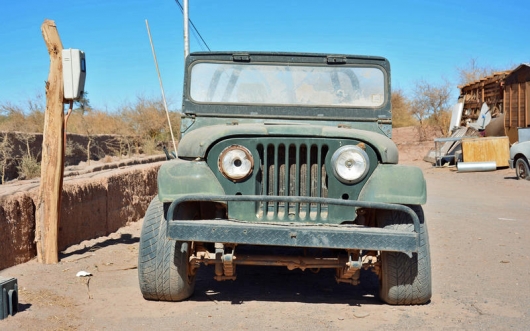 Jeep CJ-6 was an extended version of the CJ-5, released in 1955, made in order to meet anticipated demand for larger SUV. He couldn’t get development in the USA, where he spent his entire 20-year career in the shadow of his younger brother, but he became one of the most popular Jeep models in South America. Dusty’s example, pictured here, spends his days basking in the sun in the Chilean Atacama desert. 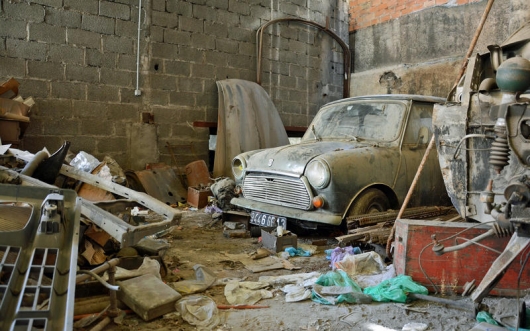 In 1980 the owner of this Morris Mini Minor 850 1972 year of release took it to the garage in Marseille, France to spent ongoing renovations. The car owner never came back. And stood the car for the next 38 years in the area. In 2018, it was bought under restoration. By the way, a perfect copy! 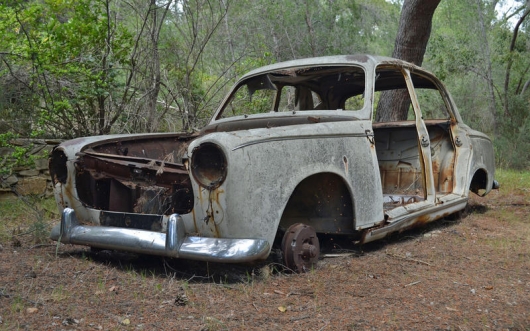 This Peugeot 403 1960-ies was dismantled for parts due to the fact that zebroski had many good parts. Including interior, mechanical components, doors, wheels and much more. 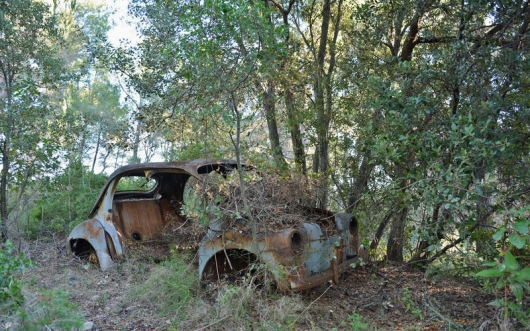 In the middle of the French forests is classic Renault 4CV. Estimated production time is between 1953-1955 year. Decade in one place is almost killed in the car. 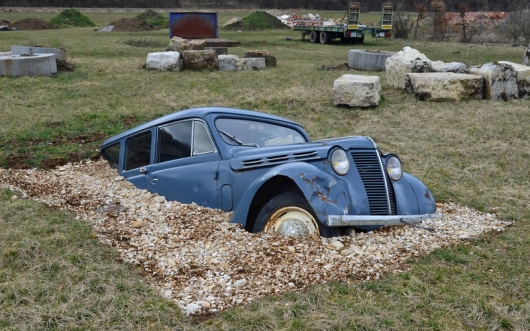 Hmm, it seems the most enigmatic car from the collection. Why is it half sunk in the ground? We do not exactly know. But unlike other abandoned vehicles, this Renault looks like it is part of some kind of sculpture or installation. 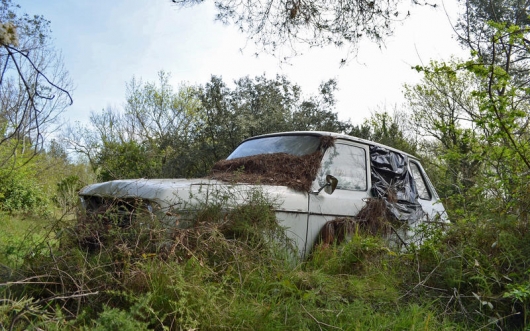 For decades, the Renault 6 was just a cheap, practical car that you could buy for a penny until the engine started to burn too much oil and not thrown away like an old pair of socks. That such a fate seems to have befallen this example. It is located in the woods near the Mediterranean sea, to the eternal laid on the pedestal of bricks, hiding under an increasingly thick layer of pine needles. 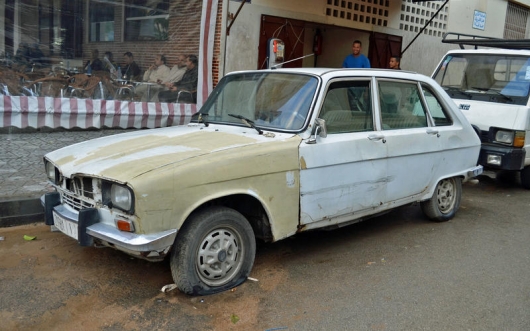 As little series of “6”, Renault 16 models also had a difficult fate. He went from a cheap second-hand to sought-after collector’s car. They say that the wine needs time to breathe so that it rose in price. It really works, even with cars. Today, the restored model is even more expensive, how much it cost as new. 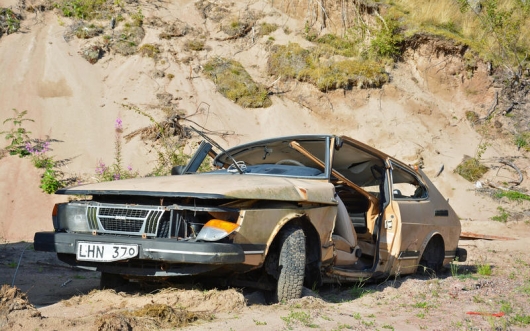 Saab waited until the middle of 1980-ies to turn the 900-th model in a convertible. It seems that the owner of the hatchback in the early 1980s, tired of waiting, and he decided to take matters into their own hands. The result apparently did not satisfy the experimenter. In the end, he sent his damaged car to rot in the backyard of the Swedish nature. 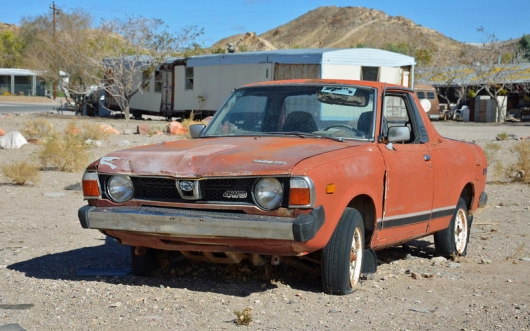 Japanese pickup Subaru Brat stuck in the American desert forever is probably not the model that comes to mind when you hear the word “Subaru”. However, it is in front of you. Note – this is a very rare model on the verge of extinction. However, the values she adds. 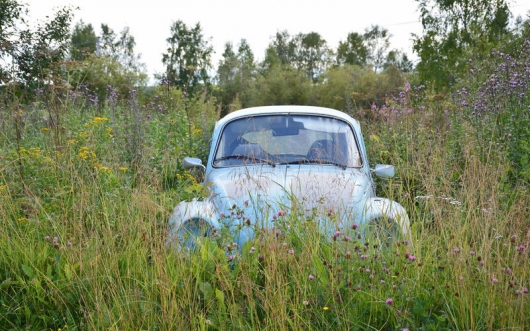 This Volkswagen 1303/Super Beetle 1970-ies parked in a fragrant field of flowers in the countryside of Sweden. Spot primer and missing front headlights suggest that it was a project under recovery, which was not able to finish. The interesting thing is that in Europe and the United States spare part for a Beetle is readily available, so it is very strange that the car was abandoned and did not work. Well, maybe not wanted? 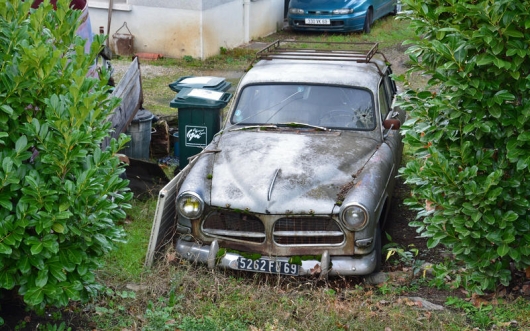 Parked on the outskirts of Lyon, France, this Volvo Amazon is home to an entire ecosystem, except that the trees had not been grown. 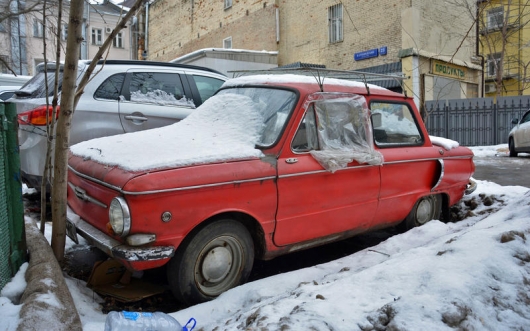 Well, our masterpiece of the automotive industry. I remember seven years ago, I heard in the shop of automobile spare parts to the seller to question the buyer about the possibility to buy parts for plows: forget it, it’s easier to get a star from the sky. Have lived already the Cossacks harder to fix than a Mercedes…