That’s why the fuel gauge in all cars lying

Did you know that the fuel gauge in the car is inaccurate?

Have you ever wondered about the accuracy of the readings fuel gauge on the dashboard of your car? Did you know that all vehicles this sensor is actually not always shows the correct information? Especially when the gauge shows less than half a tank.

I’m sure many motorists have noticed that if you fill full tank, then half tank is consumed much slower than the second half. And it’s not psychological effect. The whole point of inaccuracy of the fuel gauge. Some of them are inaccurate, deliberately created by the automakers. Thus automakers forcing drivers to refuel much earlier, before really in the tank for almost no fuel.

The fact that a completely empty fuel tank may damage the fuel pump, which is expensive to replace. In other words, such an inaccuracy of the fuel gauge needed to the driver, thinking that the tank is empty, refuel as soon as possible, though in fact the tank can still be 6-15 liters of fuel, which cools the fuel pump. 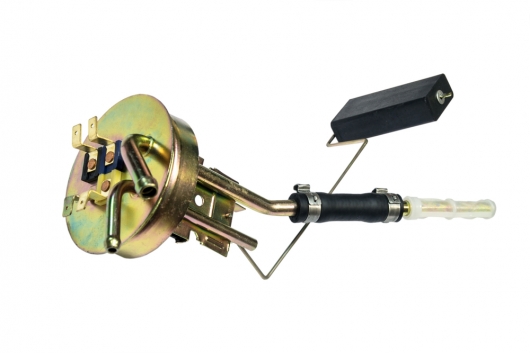 Another important factor influencing the inaccuracy of the fuel level sensor is the sensor in the fuel and form the fuel tank. The device of the fuel level in the tank is very simple, and they haven’t changed much over the last 60 years.

In the tank of modern cars are potentiometric sensors: lever and tube. Both gauges as sensing element is the float located on the surface of the fuel. The float usually made of foam. Also in the automotive industry used the hollow plastic and thin metal. 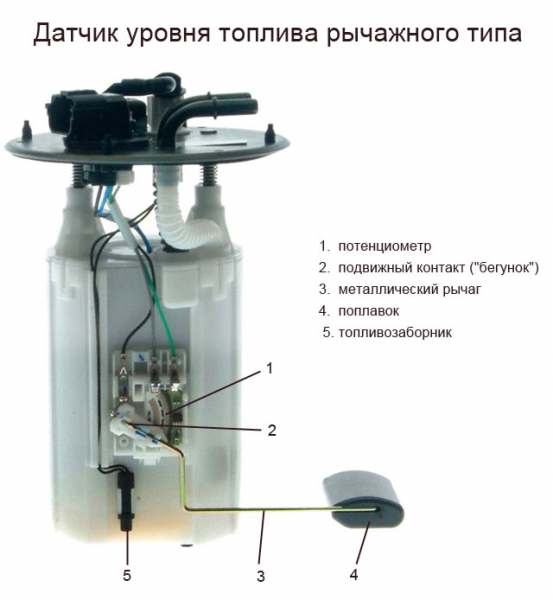 In lever the fuel level sensor in tank float fastened with metal lever with a movable contact of an adjustable divider of a voltage, a variable resistor. This divider is required to create resistance to the current. Advantage: this kind of sensors can be used in all fuel tanks. 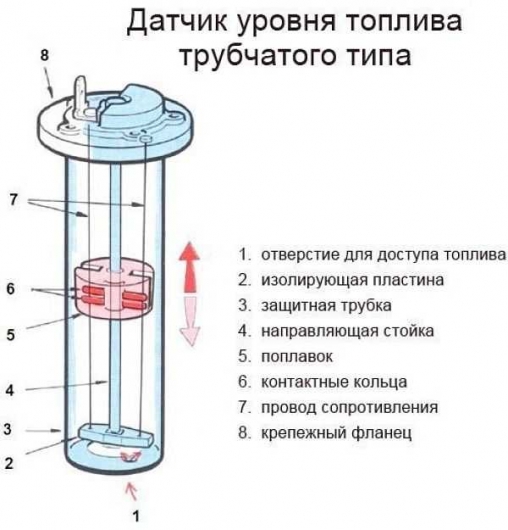 Tubular fuel sensor uses the tube, which moves the float. In parallel, the sensor is also located the wire resistance, which closes the contact rings on the float. This kind of sensors are more accurate when the oscillation of the fuel in the tank (e.g. when the vehicle goes over bumps, mountains, mountain, etc.). Cons: this kind of sensors can only be used on certain fuel tanks.

Unfortunately, regardless of the type of sensors used in the fuel tank there is always difference between the actual fuel level and movement of the resistor due to the angular displacement of the lever. The fact that the fuel level is dropping as you use it vertically. But the float sensor is, in fact, moves in a small arc because of the design features. Because, you see, when the arrow on the clean-up is approaching empty Baku, we psychologically begin to feel uncomfortable at the wheel. We have a high level of anxiety, and we faster rush to the gas station to fill your car. That is, the inaccuracy of the fuel gauge, in fact, motivates us to refuel ahead of time, thereby reducing the risk of damaging the fuel pump, injector system and possibly the engine under some circumstances.

Usually the low fuel level the car warns us of the message of the information system and the collection tubes light up the yellow led. But we all know that burning light we can easily pass more than a dozen kilometers. Here you can see how much the car can drive on a burning light bulb.

The end result of the unreliability of fuel gauges in cars is our security. This inaccuracy allows us in advance to fill the car and to feel confident and comfortable behind the wheel. In such cases, we are less nervous behind the wheel. In situations where we’re going on an empty tank, we, on the contrary, starting to get nervous that affects our driving, unfortunately not for the better.