That’s why Russian submarines cause the Americans the horror

Submarines of class “Ash” in Russia – equal in the world 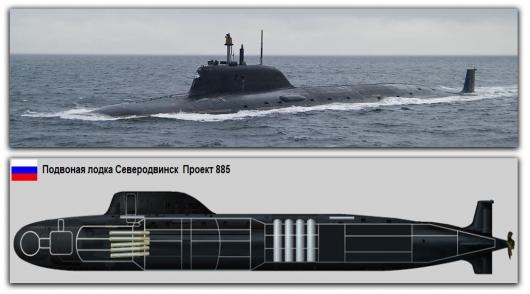 Yes, unlike many Western countries we can not boast of iPhones, drones, computers and other newfangled gadgets. But our country has traditionally ahead of the rest in the field of armaments. And it is unlikely that this who can argue. Over the long history of our defense we can boast many wonder weapons, ranging from tanks and ending the undefeated frightening nuclear cruise missiles. And recently, our country is once again declared itself to the whole world.

This time the new submarines with nuclear cruise missiles which are able to quietly approach the enemy and attack him. The advantage of this kind of missile launch – circumvention modern air defense systems. As you know, this is our serious response to the deployment of American missile defense systems around the world. Now, of course, Americans are worried. After all, our submarines of the new generation can really start to implement cruise missiles unnoticed by missile defense systems. And all this thanks to a new class of Russian submarines “Ash”.

The collapse of the USSR meant that Russia inherited this heritage of the Soviet Empire. But, unfortunately, after the collapse of the USSR our country was faced with economic problems and a number of shocks. As a result, the content of too many ships lacked money, and our entire fleet has experienced an incredible crisis in the 1990-ies.

Hundreds of submarines were thrown in the lurch. Many of them were disposed of. The development of new boat the first time our country had no money. But even when Russia began to rise from his knees after the era of change in the 90s, is that little has changed: the development of a new boat was needed of the decade. As a result, we lag behind the us Navy in many respects: in terms of equipment, and the number of ships and submarines.

And now decades later the light began to appear new Russian submarines, which began to develop in the early 90s.

One such project was the nuclear submarine c with cruise missiles (SSGN), dubbed “Project 855”, or “Ash”.

The first ship in the framework of this project was laid in 1993. The boat was named “Severodvinsk” (K-560).

Unfortunately, three years later the project was stopped due to lack of funds. Was eventually completed only one part of the hull. However, despite the difficulties, our government has brought the project to fruition. The launching took place in 2010. The boat rose to the ranks of the Northern Navy of Russia as the first truly modern nuclear submarine, created by Russia after the cold war. And who said that our country still exists thanks to the legacy of the Soviet Union?!

“Severodvinsk” – a big submarine. Its length is 119 m, width – 13.5 meters and a height of 9.4 meters. Displacement underwater – 13 800 tonnes. The boat is equipped with reactive nuclear reactor OK-650KPM, which provides a capacity of 200 megawatts, making the underwater speed of the boat is 30 knots.

The boat is equipped with sonar complex MGK-600 “Irtysh-amphora-Ash”. It is a system plus a new generation. In the bow of the boat placed its main antenna “amphora” with digital signal processing and using a digital library system for the automatic classification purposes “Ajax-M”.

On the sides are the antennas of large area, monitoring the situation around the boat. Also, the submarine “Severodvinsk” is equipped with a towed antenna, which can be produced of a fairing of the vertical stabilizer of the submarine.

The combat system submarines of class “Ash” is also impressive. So, the boat is equipped with ten 533-mm torpedo tubes. It includes a self-guided and remote-controlled torpedoes. It is also technically possible instead of torpedoes to load mines.

In addition, the boat features eight multipurpose vertical launch tubes. These launch tubes can accommodate anti-ship missiles P-800 “Onyx”, trudnoobogatimye opponent due to the low flight over the water.

Potentially sudden attack submarines of class “Ash”, armed with missiles “Onyx”, would give the shock groups of the opponent little time to react.

But many in the world fear not the missiles “Onyx”. There is another weapon that can be placed in vertical launch tubes boat: cruise missiles “Caliber”.

Missiles “Caliber” may, if necessary, be equipped with nuclear tips. According to the technical description of the first submarine class “Yasen”, named “Severodvinsk”, can carry up to 40 cruise missiles “Caliber”. 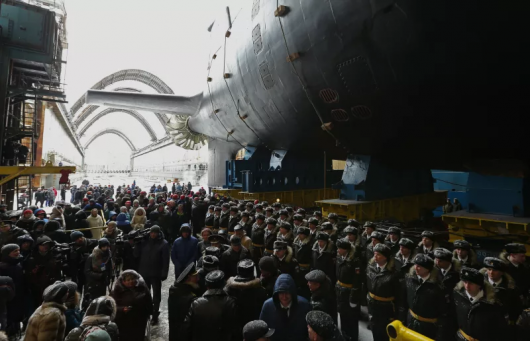 The launch of the submarine class “Yasen” in Kazan, March 2017

We also have another submarine “Kazan” To a-561 (the second submarine of a class “Ash”), which is currently launched by the modernized project 08851 “Ash-M” and soon will also join the Northern fleet of Russia. This boat can take on Board up to 32 cruise missiles “Caliber”. Can you imagine what the potential power of these ships? This is an ideal first strike platform. It is logical that even the Americans now do not sleep quietly.

For many years Russia is developing various means to bypass the American ballistic missiles. Though Americans around the world and claim that their missiles, and the missile defense system is focused on small States, such as Iran and North Korea, our country understands that this is not so. The meaning of the missile defence system and the deployment of the American system of ballistic missile launches around the world, of course, deeper. 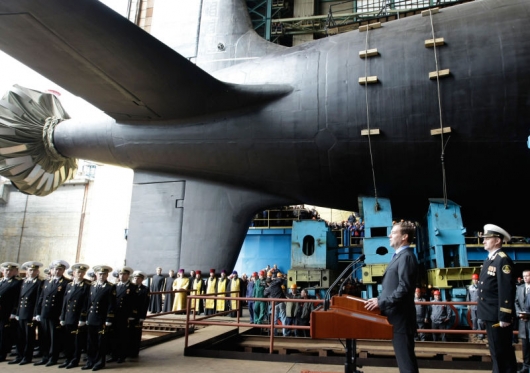 And fortunately, the leadership of our country understands this for a long time. The Americans, however, are not sitting idly by and are currently developing new weapons to control our country. In General, as you can see, we are again living in turbulent times. There are signs of a new cold war between USA and Russia. I hope that the Americans will return to earth and realize that our country has no choice but to increase their combat potential power as a response to the US missile defense system.

At the same time, the US focus on missile defense-related high-altitude ballistic missiles. But against cruise missiles “Caliber” Americans have no protection. Because they start almost at the level of the horizon area, which allows you to bypass system of protection early warning when the missile launches.

As a result, today in the U.S. military at a rapid rate, looking for response to cruise missiles “Caliber”. The only thing you do not understand, is that Russia has risen from its knees after the collapse of the Soviet Union and now again will always attempt to circumvent the US of all types of weapons. Fortunately, in our country now has the money.

What else scare the whole world cruise missiles “Calibre”, which can be equipped with new nuclear submarine “Severodvinsk”?

Of course, range. Unfortunately, accurate data on the actual flight range cruise missiles “Caliber” we do not know (the secret information). Nevertheless, among the official information there is some information. For example, 19 Oct 2017 Vladimir Putin, speaking in the framework of the discussion club “Valdai”, called the limiting range of flight of missiles “Caliber” sea-based, which is, according to him, 1400 kilometers.

But most likely these figures are underestimated. For example, ground targets range CU “Caliber” may be more than 2000 kilometers. That’s why the Americans now are afraid of our submarine “Severodvinsk”. After all, it can during the military conflict with the United States to release along the coast of the enemy missiles with the mid-Atlantic. 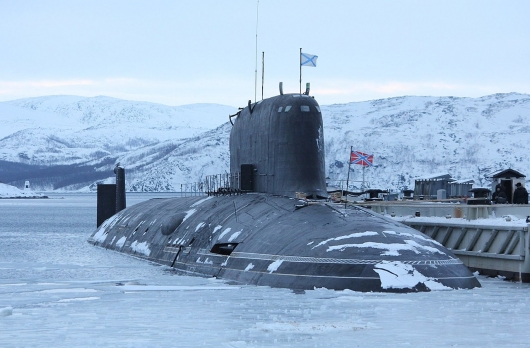 Most interesting is that the closer a submarine can come to the shores of America, the deeper Russian cruise missiles can fly to North America. Also the farther away they advance from the East coast, so they are harder to stop.

This threat has thrown into a panic the entire Pentagon, which it was decided to deploy a nationwide system of underground and ground sensors to monitor not only the sky in the case of flight at high altitude cruise missiles, but also air space top to bottom with the help of sensors installed on aristath. As you can see, our missiles and our new submarines scared the United States. Although, of course, our goal is not an attack and protection. But the Americans are still alarmists.

However, recently the program balloons were suspended after the fall of one of them in 2015.

Our country, by the way, does not intend to use a combination of submarines of class “Ash” with cruise missiles “Caliber” as a first strike weapons. But theoretically we have the opportunity.

Incidentally, the submarine of new generation “Severodvinsk” frightened not only the US (alarmists in the world enough). But really the hype about our new boats are justified. This is a powerful weapon, which has no equal. And at the moment our naval Arsenal no longer looks so sad, as it was in 90-e years of the last century.

And we are sure it will take some time and we finally will restore our Navy and catch up with the Americans and the British with their famous Royal Navy.

Most importantly, our submarine and cruise missiles, actually proved to the world that Russia has returned to the world stage weapons. Evidence of strikes on militants in Syria. Let the first missile launch from a submarine have shown mixed results, but repeated blows with both terrestrial and submarine showed the world the worth of our cruise missiles “Caliber”. It gave our country the experience and confidence that we can not only create weapons, but to use it effectively.

Unfortunately, the only thing that hinders our further development in the field of arms is the state of the Russian economy, which is still reeling from the effects of sanctions and financial crisis after the sharp collapse of the Russian ruble against foreign currencies a few years ago. However, in spite of all the world, and contrary to the predictions of the famous Western economic experts, our economy is gradually recovering and slowly growing. 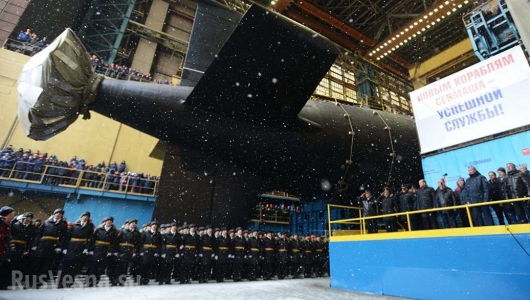 Yes, the submarines of class “Ash” is very expensive. Yes, for 20 years we have built only two such submarines. But we have the desire to build eight more, and I think with that mindset in the country in a short time we will succeed. I have no doubt.

Yes, it’s not as fast as we would like. Nevertheless, Russia has a great future in the field of armaments. The main thing to believe it.