That’s why no sign of “Spikes” this winter, the traffic police will collect more fines 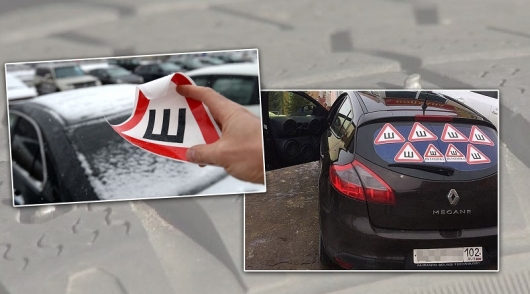 Well, that’s another season of change summer tires for winter. So, soon we will increasingly hear on the road the clatter of studs on the pavement. According to statistics, 80 percent of motorists in the winter using studded tires. Yes, they are more expensive, and the spines on many models of tires especially do not stay long. Unfortunately, without studded tires in our Northern country nowhere.

Including in large cities, where in recent years the utility recall listed and icy roads only a few days after a snowfall or freezing rain. About courtyards in General is not worth talking about. SUVs there to survive the spikes.

As you already know, many motorists, according to current legislation, swapping summer wheels for winter with studded tires, every driver is required to place at the rear of the car sticker in the shape of “Spikes”. It would seem that have changed since last winter? We all probably already have the label “sh”.

Someone does not removed from the machine. But, unfortunately, in our wonderful Kingdom. – farther into the forest, the scarier. Many car owners have probably heard this spring that the traffic police decided to cancel the duty of the drivers to stick to the car a sign “Spikes”.

In the end, a lot of drivers happy about this news, hastened to throw the ill-fated sign. But turned out to be too happy with it. After all, it was only a proposal in the framework of the draft law on amendments to the SDA, which has not been adopted to this day, despite the fact that he, as befits, has successfully passed the public discussion on the state portal of legal acts.

Recall that the whole mess with the sign “Spikes” began in the spring of 2017, when the Rules of the road, changes were made to the Main provisions for the admission of vehicles to public roads. So, according to these rules, cars with studded tires are required to have an identification mark “Spikes” (“sh”). 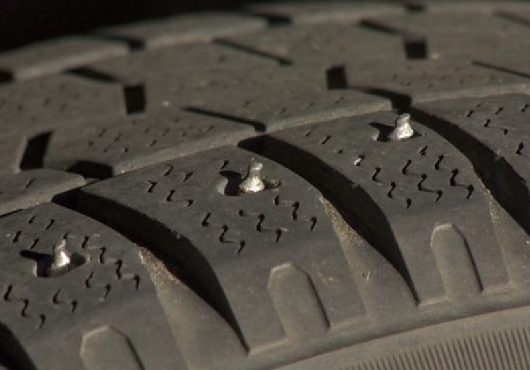 According to the law the sign of the “Spikes” should be in the form of an equilateral triangle of white with a red border. Inside the triangle should be the letter “W” in black. Also, the identification mark for each side of the triangle should not be less than 20 cm Width of the red border shall be 1/10 of the side triangular sign. This sign must be placed at the rear of the vehicle.

But in the spring the police were again surprised, and offered to cancel the sign “Thorns”, which, in their opinion, is a relic of the past. To cancel the marking plate was suggested due to the fact that the dynamic characteristics of motion of modern cars today largely determined not studded tires, and other factors, ranging from vehicle design and ending with the various electronic systems which today are installed in all cars.

For example, the braking effect of modern cars with abs, ESP and other assistance systems when braking. Accordingly, the traffic police authorities, a year after the introduction of mandatory sticker “W”, decided to retire her. According to the plan of the Ministry of internal Affairs, the amendments to the SDA to abolish the obligation to glue a sign of “Spikes” was to enter into force 01.07.2018. But for some reason the document was never signed.

As a result, today in Russia is still in force the normal traffic rules, a binding post in the rear of the machine sign “Thorns”, if it is winter studded tires. 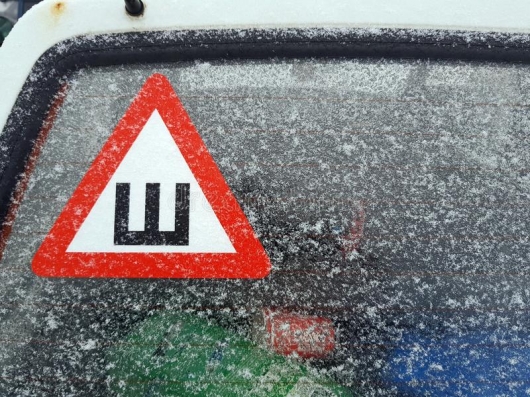 So unlike last winter season when all drivers in the result pasted their cars with signs of “Spikes” this year Gai officers, probably, exceeded the plan to collect fines, since many drivers really think that the sign of the “Spikes” now you can not use when operating car on studded tires.

What is it? Why such pandemonium with the law on identification sign “Thorns”? It really MIA all confused. And several media outlets were there to help them, saying that from 1 July 2018 the sign “Thorns” will be canceled. In the end, at the moment, Russia has a huge army of motorists and go and do not know the sign of the “Spikes” are still required under the current SDA.

We do not have information why the interior Ministry had not adopted the amendments abolishing the sign of “Spikes”. Most likely, the blame, as always, the bureaucracy. But, apparently, the traffic police is on hand. If last year’s gallant militiamen came out onto the road not only with a rod, but with a ruler to measure the size of the identification sign “Thorns”, but this year the lineup is no longer needed.

In connection with this neponyatki sign dpsnikov can be stopped every second driver who unknowingly do not put on the car sign “Spikes”. Alas, ignorance of the law is no excuse. Although it is recognized that the traffic police would not interfere again before the winter season to remind drivers about the mandatory label of the mark “Spikes”. Hope that this circus will stop soon and the interior will be canceled after all this unfortunate sign.