Want to know why all the professional rally drivers on any Championships (world Amateur) use the technique of cornering in the drift? How it is more effective in the context of sporting use in winter and if it is the General sense? This is what we tell old friends from Team O’neil Rally School, which is clearly popular among the Russian motorists, who want to learn a little more about the sporting use of the car:

How left foot braking can be useful in everyday driving?

Four-wheel drive was better under braking than the two-wheel drive: Video

What is the advantage of braking with the left foot? | Video

How to do a perfect handbrake turn: Video

How to deal with the understeer in FWD, RWD and AWD cars

And so, the scientific video-test now show us how fast rally drivers can take snowy turns, how this technique works and why it is really effective.

Before start parsing techniques, warn that its use on public roads and in the yards NOT! It’s just unwise and dangerous. Practice to specialized closed platforms under the supervision of a professional instructor. The only exception in which the technique will be useful on a public road – emergency (skid, detour sudden obstacles and other challenges on the road), especially if aggravated by the presence of rotation. Worked out at the level of instinct and practical skill will decrease the percentage of unfavourable outcome at times!

So, here is the practical proof of this, why travel to a uniformly snow-covered surface in a rally faster in drift (video with subtitles that can be translated into Russian, in the YouTube player settings):

Briefly about how the experiment was done in the video and what results it gave.

1.For test was selected all-wheel drive Subaru. ABS, traction control and other electronic systems –is disabled. Tires are shod with new winter tires.

2.The races were held in a circle. The first race did not involve drift, but the most rapid passage of the wheels without skidding. Total of 4 laps per attempt.

Marked cons: lack of vehicle response to the steering, understeer in turns, reduce the appearance of unwanted drift, due to certain points of occurrence of oversteering of the vehicle.

Marked disadvantages in the management of the car in the drift: it requires skill. It is more difficult, even if such a skill you have. Necessary too a high concentration and a good physical form intense to spin the wheel catching the car in precarious drift is no easy task. It is more dangerous. High probability fly off the intended path.

Now the main question: how and why the technique works skidding on the snowy surface? After all, as you can see from the video, the second attempt, the car obviously been round the larger arc, and therefore had to pass a greater distance. 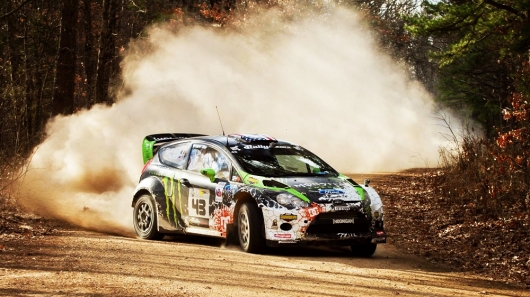 The answer is this: the car was driving round in a wide arc because it went much faster than normal cornering. Passing the turn in the slide, you can give the car more momentum, since it is possible not to brake, but to give in turn gas, accelerating the forward movement. It is for this reason the technique is so popular among racers. After all, most of their wheels is always unstable or slippery ground, and there is no other way to transfer the largest possible amount of torque from the engine to the sole of the tires. Therefore, this technique not only looks cool, but really effective!

Repeat the experiment with rear-wheel drive BMW 3-series. All the same: the rolled snow, just eight laps, and one car: