That’s what happens when the gas tank will be antifreeze

Pour the coolant into the gas tank: Video 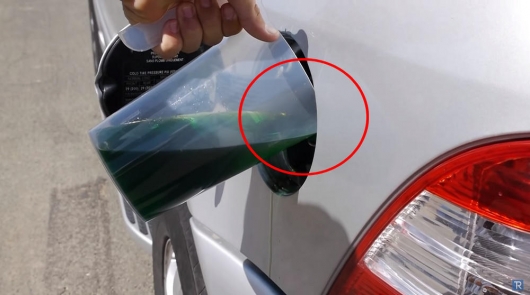 Who, what, and this run won’t let this go by reasoning on the subject of filling the various inappropriate fluids. Man, collecting millions of hits, taking a variety of methods of destruction of IPhones six months ago I decided to slightly change the profile of their activities. In a new short series, he began to jeopardize not phones, and cars…

Debut with pouring in the gas tank of an old BMW big bottle of Coca-Cola. The car drove exactly the same distance, which allowed the rest in the gas tank the fuel until it is finally mixed with soda. We wrote about it here: Here’s what will happen if the gas tank pour “Coca-Cola”

The video on the channel of the guy scored more than 10 million hits. It was a success. Further, in the gas tank of another BMW flowed liquid nitrogen. The results of the experiment turned out to be much better (for the car, of course): What happens if the tank is to pour liquid nitrogen

Then in the tank has been bleach – the result was predictable, the engine is not able to digest the foreign liquid. Came knocking from under the hood went pairs. Whiskey also became the fuel for the engine of a car and here it went the antifreeze.

Antifreeze in the gas tank… These two types of fluids (diesel, gasoline, and antifreeze), perhaps it is simply impossible to confuse. It is difficult to imagine that some driver to manage to fill the fuel tank with gasoline instead of coolant. In other ways in the engine it can get, in the event of motor failure, for example. But there are no special difficulties such “additive” to the fuel not responsible. Since the volume of fluid is minimal.

But how will affect a large number of on the operation of the motor and the engine itself? As it turned out, the coolant is filled in the gas tank capable of inflicting much more damage than the same liquid nitrogen. SUV old ML was not able to recover from the experiment. Its engine stopped and won’t start again:

What do you think happened to the engine of the Mercedes ML after it poured antifreeze? Share your guesses in the comments.