Why noise screens do not protect against noise 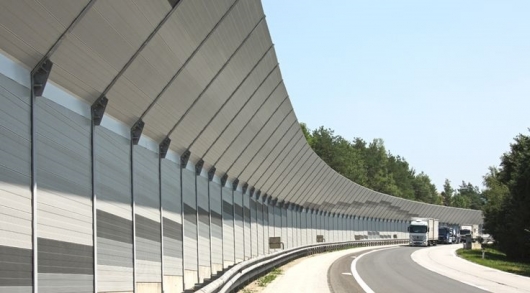 Noise screens over the years have become familiar surroundings, placed along busy roads. You can see them in the city, standing out of town along the busy roads, protecting the villagers from the relentless roar of rushing vehicles. Used screens and around railway embankments. Pressed tin, plastic, composite, straight as fences and concave inside. In General, they are completely different, but pursue a common goal – to keep noise inside, not to allow it to spread for kilometers around the perimeter.

But you asked the question: “do Protect sound-absorbing screens people from annoying sounds?” Actually the question is not idle and not weird. Here’s my personal observation.

Last weekend I went to one a cozy place near Moscow. Gated development, standing in a picturesque valley, surrounded by forest, lakes, winding river, the berries, the birds are singing and the mushrooms are growing in enormous quantities after heavy rains, which gave the nature of people in the Central regions. Grace! But the trouble is, three hundred meters away is the highway and the noise from it quite clearly comes to houses. Buzzing cars and day and night, spoiling the whole “raspberry” vacation. Even to collect strawberries in the way.

Moreover, if you approach the lake which is just a few dozen metres from the road, the rustle of wheels on asphalt and the sound of the engine definitely sounds less. How so? Very strange effect! Guesses were of course, but to strain your brains at the weekend was lazy, so went back to Moscow a few days in a row not even thought about suddenly appeared secret.

But what a coincidence in this life. It turns out that a similar effect is heard not only I, and residents of private homes in the suburbs. The phenomenon can be found everywhere, and its study even to the experts. The article wrote about this on an American car site and after that, the whole mosaic exactly happened in my head. We are glad to share information with our readers.

All about physics of sound-wave propagation. Here is how at odds the sound, according to the schedule, based on data from the Department of transportation, Wisconsin: 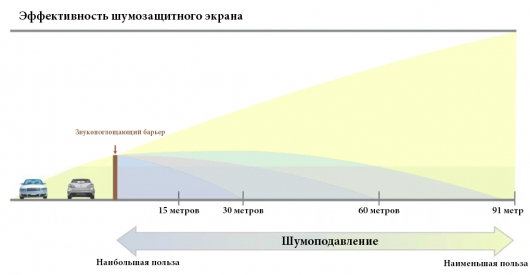 As the graph shows, the most effective is the job boom seen in the maximum approach to the barrier. While one should stand directly behind him. Up to a point, until approximately 80 meters in the lowlands, dense fence will actually reduce the sound. Although, as seen in the chart of his efficiency at distances up to 100 meters will continue to decrease. That is the sound of 100 metres behind the fence will be heard more clearly.

But the most interesting will begin to occur over the edge of the fence. It turns out that at certain angles of attack of the sound wave, the noise from the road could even increase!

What is the explanation:

Since noise propagates in waves, not a straight line, the sound can actually “jump” the wall. That’s why even high 5-meter barriers, the people standing on the deletion of blocks can clearly hear the noise of a moving vehicle. 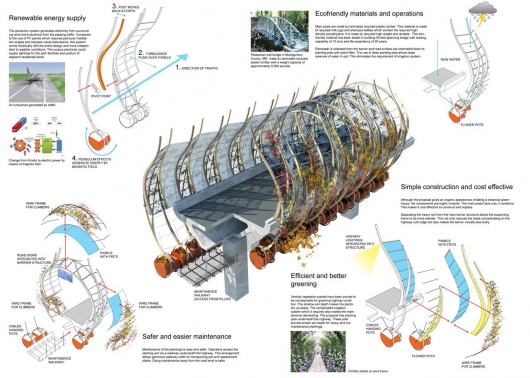 Part of the sound wave is absorbed, part is reflected from the wall, and part is transmitted through the solid surface of the plastic or tin walls. Some of the sound rises above the barrier is diffracted (deflected from the laws of geometric optics with the propagation of waves), eventually getting to the receiver, — that is, in our ears.

Under certain weather conditions the sound in the distance may even intensify. It is easy to check if you stand upwind. The sound will reach you clearly, and his strength will be an average of 5 decibels louder.

Here, for example, in the early morning when the ground is still cool and the surrounding air begins to warm up, a sound wave is typically repelled from the surface of the earth up, on the contrary, will be below. The laws of physics it will be deected downward, resulting in people standing at a distance of 150 – 300 meters also will hear it louder.

Those located on hills or on the upper floors of buildings will receive more sound waves to your ears. They were lucky least.

There you have it. 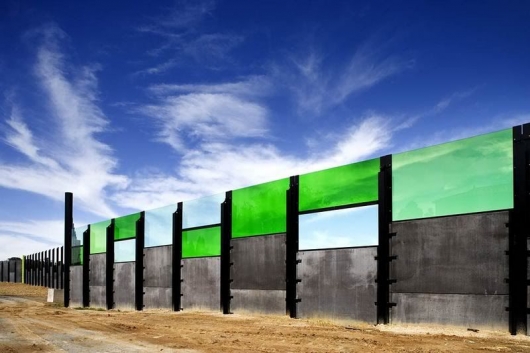 On noise barriers, the government spends hundreds of millions of rubles. Typing in the search query: “the cost of noise barrier” and clicking on the first link company engaged in the installation of similar fences, I found that the price tag on them “bite”. The average cost of a 100-meter section of a noise fence is nearly 2 million. This is when you consider that the height of the fence is 3 meters. The screen of the same materials with a length of 100 meters, but a height of 8 meters, will cost three times more expensive.

Since this is “average cost”, we can assume that a more progressive system of noise suppression, for example, zvukousilivajushchie screens, and sound-absorbing panels cost significantly more. The latter, incidentally, is extremely effective. That is, to walk a kilometer with a large fence will cost 61 million rubles. 1 million dollars! And the other side of the road? Hmm, not a cheap pleasure.

But you know what’s weird, is there are many other engineering structures, which is ready to suppress the noise is not worse than the walls along the roads, but they are cheaper. Experts around the world have often had this conversation before.

For example, fine-grained asphalt significantly reduces the noise from the tires (it is also called “quiet dear”). Must have noticed that driving on some highways and the rustling of tires on it almost inaudible. Here it is:

Asphalt is only one of the possible solutions. Here’s another, called “4Silence”. Developed in the Netherlands, is able to absorb noise with recesses on the side:

In General there are options. By the way, here’s how to work the sound-absorbing panels:

One mystery has become smaller, isn’t it?