This technology is called Audi Virtual Mirror. The system consists of two small cameras that are installed in the place where in normal cars we’re used to seeing the traditional side mirrors.

The image, which removed the two side camera instantly transferred to two small touch screen located near the door handles crossover E-Tron.

It is worth noting that different brands have long been “playing” with such technology, showing us the technology of the video transmission side of the view screens in the cabin. 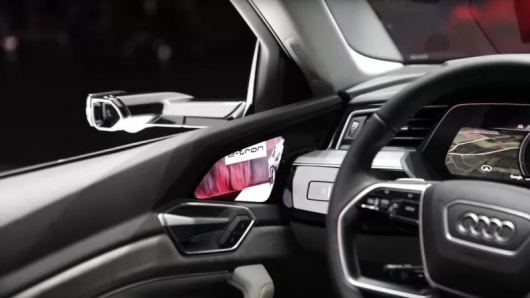 Usually, we are talking about concept cars that were shown the public the last 10 years.

But, alas, such technology did not appear until the production cars. And the reason is not that this system is still not perfect. It’s quite different. So, in many countries, this technology cannot be applied, since it is prohibited by laws of some countries.

But, apparently, Audi has managed to align its technology with a number of major developed countries, which will be sold to electric crossover E-Tron.

Because as stated by the representative of the German brand, these side view mirrors are supplied in some models the serial crossover. In many respects this became possible due to improvement of the transmission of video images from the side cameras, which now has different highlights failure of spectrum and errors.

In addition to these new digital side view mirrors and high-tech screens the interior of the Audi E-Tron differs from other modern models of the German mark. Thus, the crossover features a new instrument panel, which includes two touch screens where you can manage all functions of the car.

Including tidy instead of analog engineers have installed electric crossover a virtual dashboard, which is called Audi Virtual Cockpit.

Recall that the electric crossover is equipped with three electric motors with a total power of 430 HP (one motor at the front axle, two on rear). Audi planned to open the car to the public August 30, 2018 at a summit in Brussels, but because of the arrest of Director of the company Rupert Stadler debut of the crossover has been postponed. Most likely, the serial car will be presented to one of the showrooms in autumn this year.

So we stand on the threshold of a new era for the side mirrors, which may soon leave in the past. They will be replaced by cameras that transmit the side visibility of the display installed in the vehicle.

Fiction? Actually no. For example, you could have another 5-7 years to think that in many cars today will have a digital instrument panel is an LCD screen? Then this seemed to be fantastic. Today, these tidy already at anybody does not cause surprise.

The same applies to mirrors. You know how quickly technology can change trends, fashion and the world.