As Russian engineers built a sports car, which it was impossible to buy in the USSR 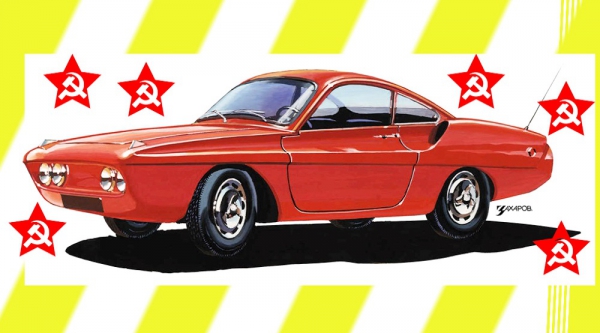 Imagine that you lived in a world where you were a mechanic, doting cars, but you would not be able to buy an interesting vehicle as it would on the world market did not sell anything worthwhile. Presented? Awful? But surprisingly this time our country has experienced. We are talking about the Soviet Union. Now one more question. So you did during the Soviet Union if you really want to have some interesting cars?

And remember that you not only were able in those years to bring a car from abroad, but could not even leave the country as a tourist. So in such circumstances, any of us would just give up.

But if you really are obsessed with cars and can’t imagine life without them, then maybe you would have done as a team of Russian enthusiasts who decided to create a car that could compete with any foreign sports car.

Yes, in the history of automobile industry, there is one interesting story that proved that if you really like the car, even the iron curtain of communism will not stop you at nothing.

This is a story about how 6 of our compatriots have developed from scratch a sports car and even made a first experimental batch. As you have already understood the purpose of a sports car, it was a desire that on our market the Soviet Union were worthwhile, interesting sports cars, at least outwardly able to compete with foreign cars. 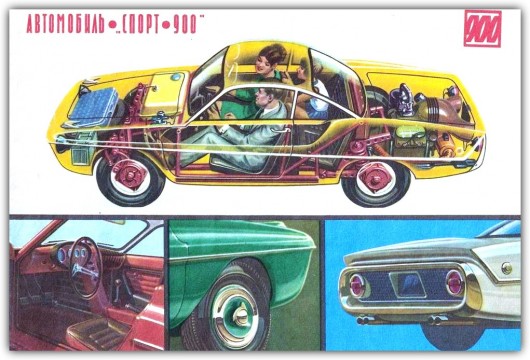 This is a story about a little-known Russian beautiful little sports car, which was a little like a Volvo P1800 (produced from 1961 to 1973), and also reminded Us of the compact Chevrolet Corvair (was produced from 1960 to 1969).

But this similarity does not mean that Russian engineers just copied the design of the aforementioned machines. In fact, in those years, this style of cars was in Vogue, so the designers of Russia took into account, of course, the concept of many foreign cars.

So. As you know, during the Soviet Union in our country it was impossible to buy an interesting car, as this vehicle class was not simple. That is no factory in our country in those years did not produce similar class cars. 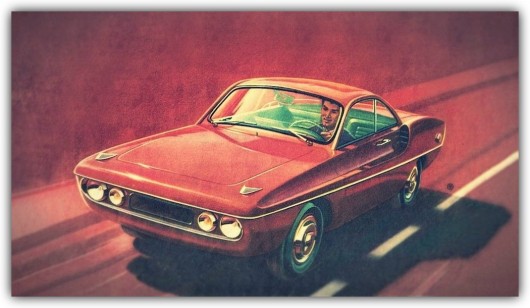 Therefore, the group of engineers decided so. If you can’t buy, then you need to create. In the end, they have developed the car with the working title “KD Sport-900”.

The car was created in 1963, the engineers and mechanics who worked in the scientific research automobile and automotive engines Institute (known as US).

In the development were: Eduard Molchanov, known in the USSR Russian designer Felix khaydukov, engineers Leonid Durnov and Igor Durnov, a chemical engineer Anatoly Syvorotkin and artist Vladimir Eltishev (in many sources called Vladimir artist, but, apparently, he was avtodizayner).

The car, as we have said, received the official name “Sport-900” CD.

“KD“, apparently, is the alphabetical abbreviation of the name and surname of the Director of the plant “SAK” (Moscow plant of automobile bodies) – Touzma DUrnov.

Why six enthusiasts in the name of the car “Sports-900” added the abbreviation “KD” is not known. But most likely this is due to the fact that the capacity of the plant “SAC” produced the first prototypes of a sports car, or due to the fact that Kuzma bad has created some of the vehicle components in the design process and production.

The car was built with the use of the frame spars of steel tubing, which has been combined with a frame made of slim 30 mm tubes. The frame is mounted the body panels are created from fiberglass (GRP).

The machine was equipped with the engine from the popular domestic car ZAZ-965 (Zaporozhets). 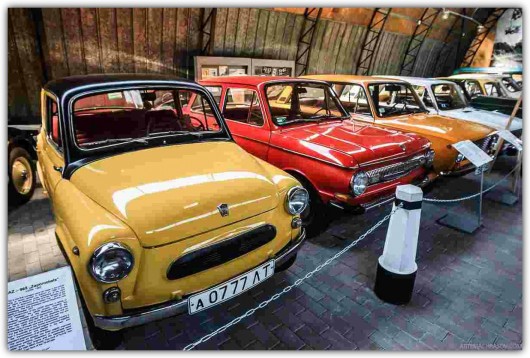 But the value of this machine was, of course, not technically. The creators managed to do the impossible. They are created from scratch, indeed very beautiful and interesting car that would easily fit in on the streets of Europe and the United States in those years if he was sold for export, but also could decorate gray of the Russian streets at the time.

And believe me, foreign and Russian audiences would have appreciated the bright appearance of this experimental machine.

As you know, the engine was located in the back, which allowed the designers to make the hood of the car low, and the entire front of the stunningly beautiful without the extra panels and grilles. But most importantly, thanks to the engine layout, the engineers were able to provide the car a perfect weight distribution of weight, which gave the machine a distinct advantage on the road.

Also note the rear air intakes located on the rear fenders which were needed for cooling the power unit, which not only protects the motor from overheating, but also served an aesthetic role in the design of the body.

In the end, the entire exterior of the car turned out amazing and very unusual for our domestic cars of the time. 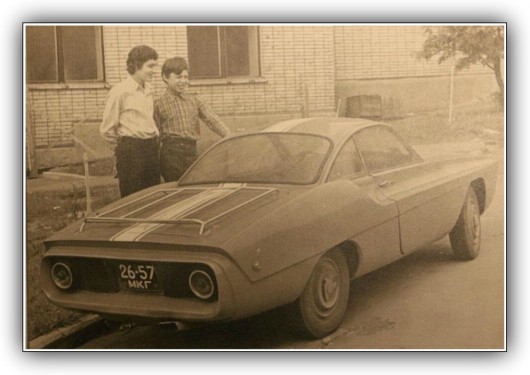 If you look closely at “KD SPORT-900” (especially the front part and side part), you do notice that the car is somewhat similar to a Volvo P1800 coupe.

Including you may notice that our domestic sports car, which is also similar to other sports cars with a rear engine that were produced in those years: Fiat 850 Spider, Fiat 850 Spider and others.

If you look to the rear of the car, you will see the American car influence. The entire rear part of the machine is made in the style of American cars popular in those years. Thanks to the massive hromirovannaya rear bumper, a large rear round lights surrounded by mesh running along the entire rear body panels, the coupe “Sports-900” similar to some sports cars Ford. 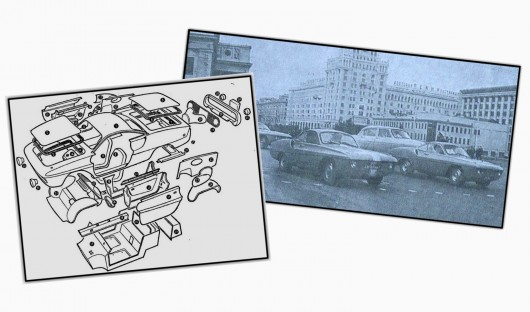 It should be noted that “KD Sport 900”, not just some isolated instance in the form of a concept car. A team of engineers was planning seriously to start mass production sports car. As a result, from 1968 to 1969, they even managed to produce the first 6 copies as pre-production prototypes.

It is quite possible that a number of machines was done for a reason. After all, the creators were six. Accordingly, apparently, everyone got the same car.

By the way, in those years, this car has got pretty much attention. It is worth noting that the model “Sport 900” has not been classified in many Russian magazines and Newspapers constantly reported on the car. Including the car has become a party to various showrooms and parades.

Eventually the car became popular among the public, which showed great interest in the innovative sports car. It would seem that everything was going to mass production. After all, once it was clear that the demand will exceed the offer.

But unfortunately, like many in those years, amazing projects, the project of serial production of the first sports car was discontinued, since the start of production in those years depended on the decisions of the Supreme persons of the state. You know, the planned economy dictated all our lives. Well, as one would in those years, to expect someone like always decided for us that people in the USSR this car to anything.

Eventually over time, the fame of this machine was a thing of the past and today almost no one remembers. But this is our story of the automotive industry that should never be forgotten. And the benefit does not allow us to forget the car information that may soon each of us will have to see “Sport-900” live.

The fact that incredible, but some of the six instances of the cars have survived to the present day. Though not in perfect shape. 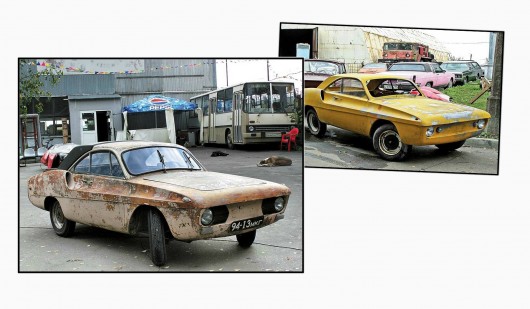 There is also information about what is currently one of the copies undergoes a complete restoration, and maybe soon we will see the original “Sport-900 CD” in perfect condition and will be able to see him for future auto shows.

The whole story is extremely impressive. It is a story not just about the car. This is a story about the people who absolutely loved the car, but it turned out in our country in a position where it was impossible to buy exactly that car you dream about. 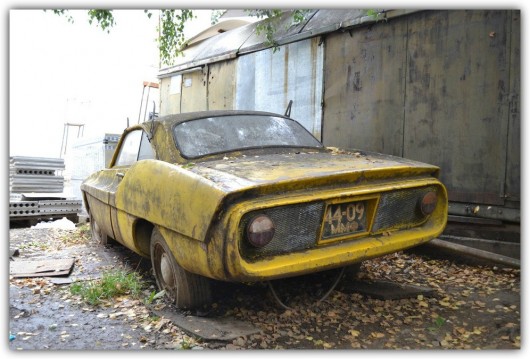 And this paradoxical situation has surprised many in our country. Because in those years the highest person of the state stands high told people about the activities of the factories-giants, but the population still could only dream about their normal cars. But, alas, that was the time.

Who can say that the population in those years did not need cars, especially sports cars. But it’s not. A huge number of people in the USSR dreamed of a good domestic car. 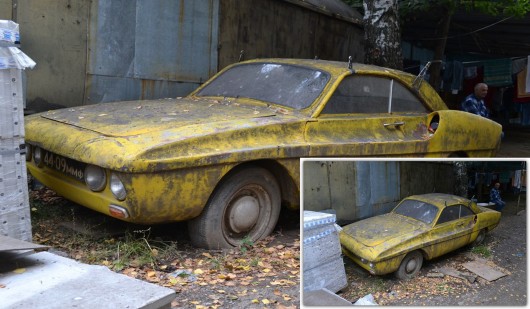 It is in this era and there is a coupe “Sports-900”, which was created by true lovers of cars and professional engineers and designers.

But the most striking thing is that even despite the iron curtain that is associated with the policy of the Soviet Union, the hard mode hasn’t stopped people obsessed with the automotive world. And even in the total absence of technology, information, etc., talented team in an incredible way not only managed to design the first full production sports car, but even to produce the first prototypes. 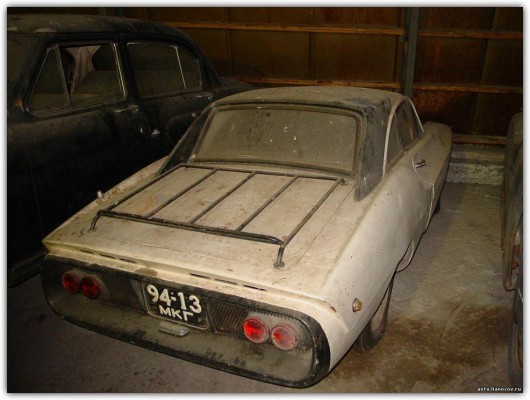 It’s a pity that this project was stopped, as many other stunning concept car designed by other engineers of our country. Otherwise, we are confident that our Russian auto industry today would be at a higher level than today.