The autopsy of the rotary engine is always informative. Look at it from the inside, and understand – here it is the true magic motors! All these triangles and ovals, in fact represents the pistons of the combustion chamber and the engine block, interact with each other? How such a seemingly simple unit is not only able to create momentum, but also to make it more productive continuously developed for more than 100 years the piston engine?

Somehow we published a rare video in which a Japanese man is a highly skilled engineer, manually collected a shiny new polished metal Wankel engine 13B-REW factory Mazda. The whole process looked very simple. If it’s not industrial Assembly of one of the most upscale and high-precision motors in the world, and the game “Lego” for children up to 6 years without major items that these children can swallow.

Video: How Mazda did their rotary engines

Even more interesting to see a disassembled rotary engine last more than 100 thousand kilometers. What’s happening to his insides? How they react to loads and what traces remain on them when the engine is running? In fact, you can now see all of those scratches, dings and cracks that tell the story of one unusual rotary engine. But you need to look carefully and as usual we suggest to include subtitles, if English is a mystery to you:

Youtuber Rob Dahm recently pulled a triple rotary engine from his racing Mazda RX-7. Engine, judging from what was told by the owner, went through all the circles of hell. It is mercilessly exploited for nine years, he “filmed” with different settings from 750 to 950 horsepower, he was racing, at the same time, as recognized by the owner, and he especially didn’t care about the state of rotary steel “heart”. As a result, when the power unit was removed and disassembled, it was found that quite a lot of parts were badly damaged.

Countless scratches on the inner side of the combustion chamber, the collapsed corner seal (motor not shown need compression, did not hold idle and would stall at any moment), a crack in the lug of the housing part of the motor, and the piston housing flaunts a huge dent in the upper half of the reuleaux triangle! You can see at 2 minutes 13 seconds into the video. How did this happen?! 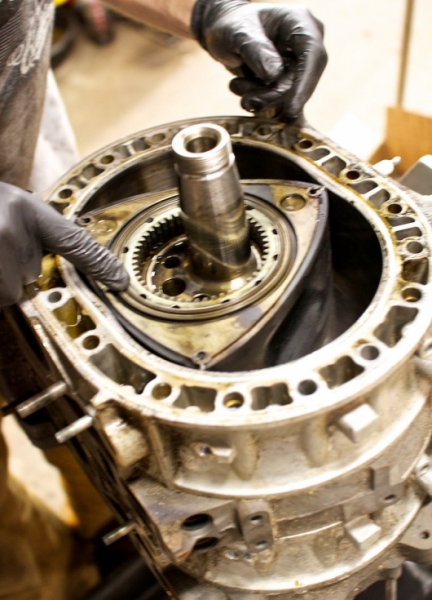 Powertrain Wankel will undergo a refurbishment and it seems that he will once again be ready for new challenges.

In General, we are very surprised at how tenacious was this type of motor. To such damage and such “servants”, how did he even survive? Are the stories about the waywardness of rotary engines is a myth? It seems that rotary engines – the most reliable in the world!