Reliability of German cars is a myth: says the Estonian owner 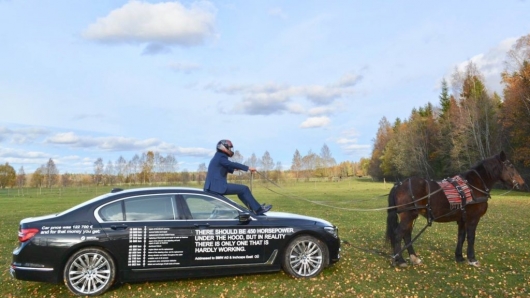 It is believed that our motorists owning a premium models expensive brands – the most balanced in the world. Countrymen rarely something to surprise, and to bring them out breakdowns and repair of cars, you need to try very hard. It seems the cult of Mercedes-Benz and BMW came to us in the late 80, 90 years still has not lost its charm.

But pampered Europeans give quality! They are not willing to put up with constantly mired in the dealer service the car, especially if we are talking about premium class, for which he was given a lot of money.

The tone of the protest movement seven years ago asked a well-off Italian, acquired a cool new coupe BMW M6. In his words, the car almost immediately started to “crumble” disputes with any dealer to no avail, and the enraged owner decided to play it safe, starting to rant and promotions on the big events attended by the company BMW. Never heard of this? In vain! Suggest to see:

Because of the poor service, the owner crashed his BMW M6

Disgruntled BMW owner continues to protest to destroy their cars

He continued to Express his opinion against (I wonder what vs BMW) and the other owners, for example, this Estonian: 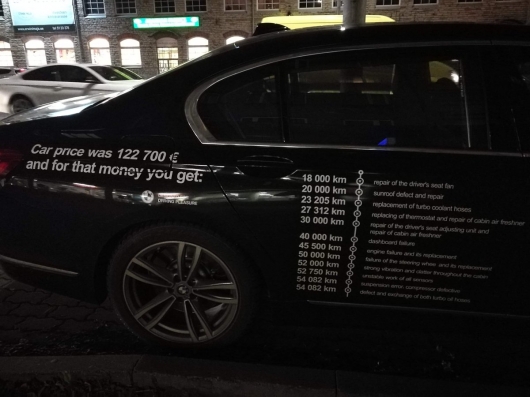 He is so tired of the constant breakdowns that expressed their protest in the form of interesting graphics, pasted on Board his already hate BMW, which described everything that happened to the car from 18 to 54 thousand km of mileage. And typed as seen in the photo above a lot. In order:

27.312 km: replacement of thermostat and repair of air freshener in the cabin

30.000 km: failure settings for the driver seat and once again failed freshener interior

40.000 km problems with the dashboard

Many will say that it’s the little things and nitpicking pedant, not of failure, but then it was more:

52.000 km: there were vibrations and rattles in the cabin

52.750 km: unstable operation of all sensors (whatever that means)

As you such a list? Impressive! Of course, much was replaced by the dealer under warranty, but the owner and repaired at his own expense. In the end, in desperation, finally, the car owner demanded return of the car in exchange for money. Interesting that the dealer agreed to refund only half of the original cost of a sedan – 67.5 million euros. After that, on Board the “Boomer” and have a list of problems, as well as several inscriptions in the style of: “Cost car 122.700 Euro and for this money you get:” more mileage with the problems highlighted in front of him.

The second inscription, in large letters reads: “UNDER the HOOD HAD to BE 450 HORSES, BUT IN REALITY there is ONLY ONE, AND SHE BARELY PLOW”…