Porsche Taikang electric new which will change the automotive world 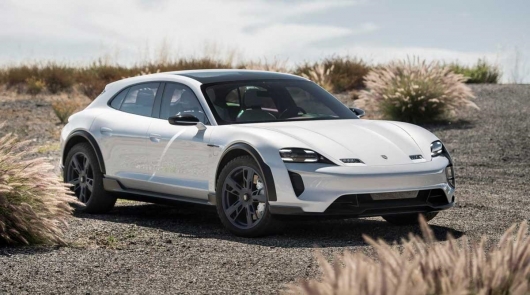 In the coming year to start out 600-horsepower electric Porsche Taycan. This new crossover from Germany will be cheaper than originally anticipated, but still remain very expensive premium representative stuffed with the latest technology. That’s what we know about the unusual from all sides of the crossover. 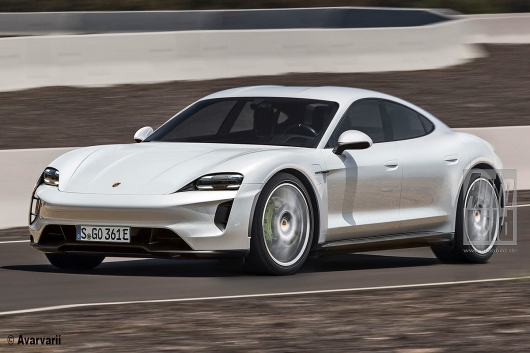 The first electric SUV the Porsche may be cheaper than previously thought: his price tag as they say the European auto experts, is likely to be somewhere between the cost of new models Cayenne and Panamera. This information the publication Automotive News Europe has confirmed the project Manager Taycan Robert Meyer.

This means that the starting price Taycan will be between 75.000 and 90.000 euros (5.6 – 6.7 million rubles), which is significantly lower than previous assumptions: until now it was thought that the latest electric crossover will pass the threshold of 100,000 euros (7.5 million rubles).

However, again, say auto experts, is the cost of only the initial version of the model. The top version sure to be super expensive. Predicting the price of 200 thousand euros (15 million rubles). So many are not even the most powerful version of the Panamera – Turbo SE Hybrid. For this price, the equivalent of several apartments on the outskirts of Moscow the buyer will receive a huge number of various additional technologies, power and extended range on a single charge.

Porsche starts doing the car no harm to the environment 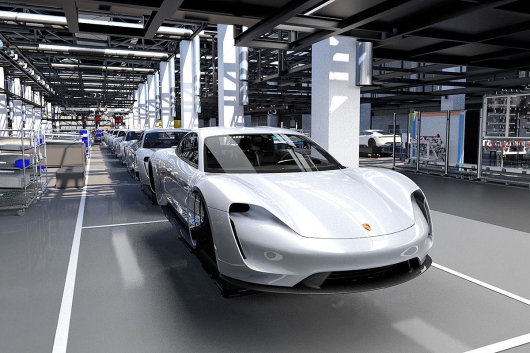 Porsche has already started production of the model Taycan at its new factory facilities. For Assembly of new products was created over 1,200 new jobs, and the method of mounting has been completely changed. The first electric Porsche will not be collected according to the classical scheme on the Assembly line.

To move the bodies will be used a special Autonomous system of transportation. These unmanned platforms allow you to do more manufacturing operations in the same place with less time and effort. But more importantly, the entire production process must be environmentally safe for the environment, with CO2 neutral and as noticed by specialists – taking into account resource-saving production. 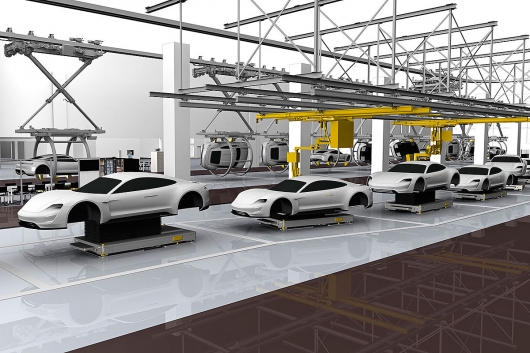 According to Porsche, the goal is to master the so-called “factory zero impact”, i.e. the factory, during production cars on which there is the harmful effects on the environment.

The exterior of the crossover Taikang 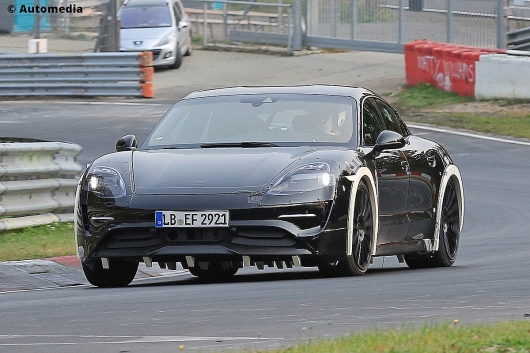 Name Taycan (read as “Taikang”) came from the East and has Turkish roots. Translated it means “lively and energetic foal” – so beat the Porsche logo in the center of which, as you recall, depicts a prancing horse.

When focusing on exterior design, the Porsche appears to be focused on the first pilot pre-production concept-Mission E. Similarities visible to the naked eye: 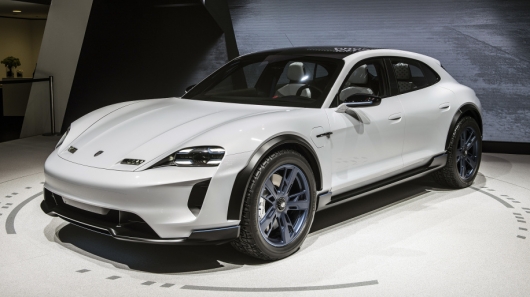 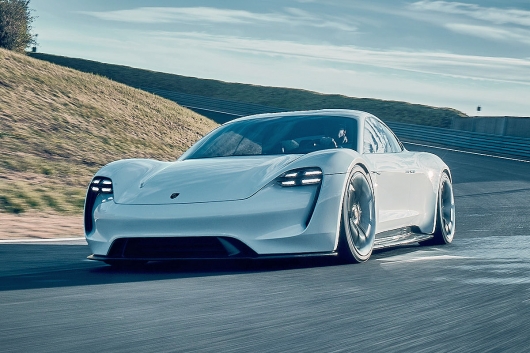 Generally the style of Taikang deserves a special mention. Look closely at the pictures of the prototype. You do not get the feeling that you look not just on the car, and very stylish, fashionable and cool full a toy rather a serious model? Somehow we think that way. Of course it’s not quite a production model, the one you’re looking at now, but if you compare it with a body that is already quietly floated down the Assembly line, as described by the workers themselves Porsche “factory in factory” for the production of Taycan, superficially similar they are very much.

Door electrodevice will be open as usual, but not as Mission E – “against the grain”. The center will be a Central strut. The concept of 2015, as we know it was not.

But the rear lights are made on the sample of the study Mission E – relatively flat and has a separate led units, however, like the headlights. Lining “exhaust pipes” on the rear bumper of a test prototype performed to divert attention, so we will not dwell on them. In a production car will be installed only the electric motors to the equivalent of 600 horsepower from the engine. 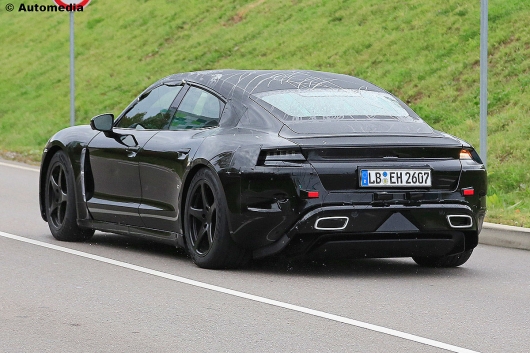 Interior: lots of space due to the absence of a tunnel under the driveshaft and transmission 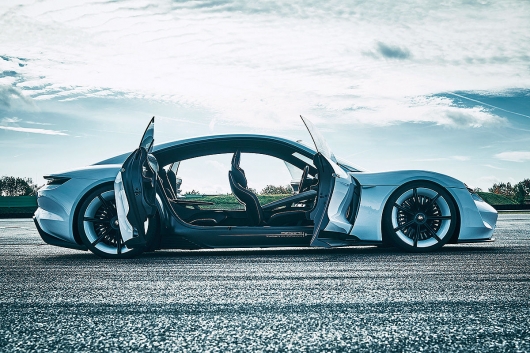 The study Mission E showed clear advantages of electric circuits: designers do not need to pay attention to the transmission tunnel, when they composed the inner space – all thanks to the electric drive.

The batteries in the Porsche have been placed under the passenger compartment over the entire length basis between the axles. Passengers sit in four separate seats, which form will be similar to the seat of a racing car, as done on the concept. 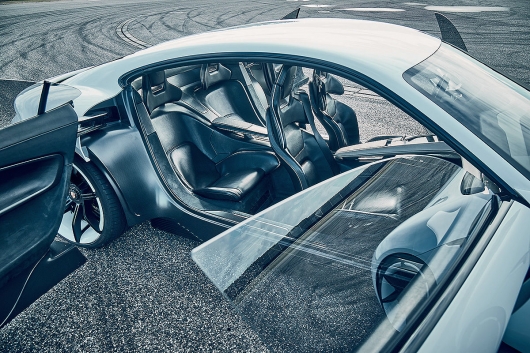 Managing conception inside is through the activation technology with a look and gestures, and reading of information is conducted through the hologram. The infotainment system, sat NAV, air conditioning and vehicle settings can be selected and changed using the applications unlike the gesture control is done almost traditionally – through touch screen on Central console. A special camera tracks the direction of gaze and the position of the driver. Using these data, the car adjusts the visibility of the 3D tools in the field of vision of the driver.

Driving: accelerate to 250 km/h is not possible 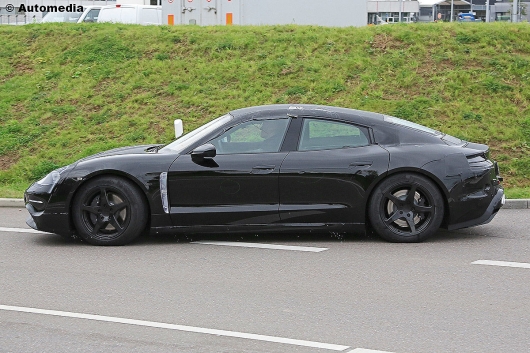 Veto – speed above 250 km/h. Why? Just otherwise the technique will face with unhealthy high temperatures and very short ranges on a single charge. However, in contrast to the most powerful Tesla Model S, Porsche, according to German experts, doing everything possible to even when the tenth consecutive maximum acceleration, the battery is not switched prematurely to the mode of reducing power, and the car continued to keep the tempo when you press on the accelerator pedal. 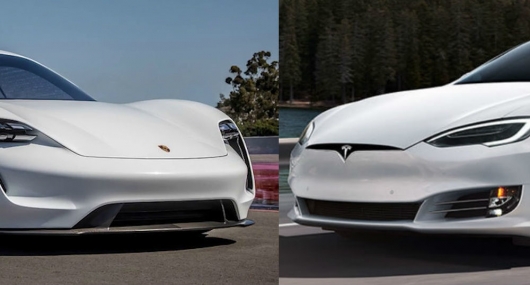 Two electric motors generate more than 600 HP (440 kW). Crossover-Taycan will use 800-volt battery. Due to this, according to Porsche, it is possible to significantly reduce charging time: 80% charge (enough for 400 kilometers), the vehicle can be connected only 15 minutes to the mains 800-volt connector Express charging. Equipped with two motor – similar to standing on the winner of Le Mans, the 919 Hybrid model. They will provide the drive for the electric Porsche.

Power goes to the asphalt drive to all four wheels with thrust vector control. For the top model of Porsche’s acceleration is 3.5 seconds for the sprint to the speed of 100 km/h in Less than twelve seconds “Taikang” need to take 200 km/h On the “Nordschleife” of the nürburgring, the car was a circle eight minutes, according to Porsche. Perhaps in the future the company will present even the entry-level model with a pure rear-wheel drive.

As we have said, the main advantage of quadruple German car before Tesla competitor will be the absence of problems with a critical overheating of the battery and the entire electrical system.