Is it possible to start the car on an empty tank? 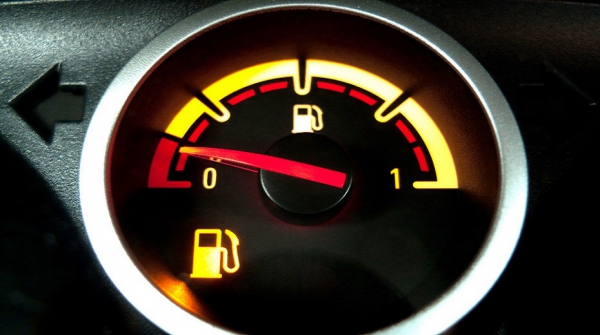 Have you ever wondered how many can drive your car after the dashboard lights up the icon for low fuel level? Indeed, sometimes it can be fun to experiment to see how much you can pass on the last liters of fuel.

But you don’t have to do this, if you do not want the fuel pump has failed. Here is a video in which the author completely took apart the fuel pump and explained how it works. Understanding the device and principle of operation of the fuel pump, it is clear that the low level of fuel in the tank is not conducive to the long life of the fuel pump.

The fuel pump draws fuel from the fuel tank to the engine. This is a key component necessary for machine operation. Unfortunately, it is not rare that a part fails. And often without any warning. In the end, a lot of drivers have become the hostages of the situation, when the fuel pump flew to the wrong place and time.

For example, there is often a pump is flying on the track. Naturally after the breakdown of the pump you can’t move. Most interesting is that most often the fuel pump fails at the time when the tank is still a bit of fuel. Why is this happening?

To do this, view video of the author speedkar99 from the YouTube channel:

Don’t forget to turn on the subtitles and their translation, if you do not know English.

The main causes of failures of the fuel pump, usually associated with a low level of fuel in the tank. In this case, the fuel pump is experiencing increased stress. The first to suffer the strainer in the pump and the motor.

As you can see in the video above, the electric motor of the fuel pump is cooled by fuel. 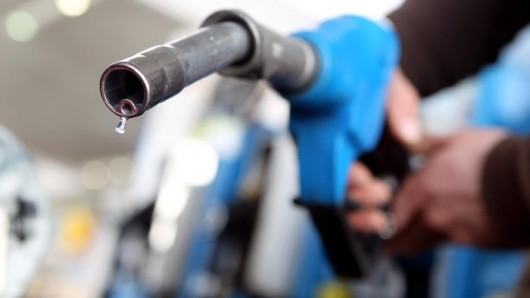 Start car with low-fuel means that the fuel tank will be mainly of various gases (oxygen, etc.). Accordingly, they will also get to electric fuel pump along with the remnants of fuel.

But, unfortunately, the gases accumulated in the fuel tank passing through the pump motor, have a low coefficient of heat transfer than convective fluid. In the end, Gaza is unable to remove the heat from the motor windings of the pump as effectively as it does gasoline or diesel fuel.

As a result, when a low level of fuel in the tank, the motor pump may overheat, melt the coil, which of course will lead to pump failure.

In addition, the fuel acts as a lubricant for the fuel pump. So running a car on an empty gas tank will lead to fuel passing through pump excessive gases. This can lead to premature wear of the rotating parts of the pump. 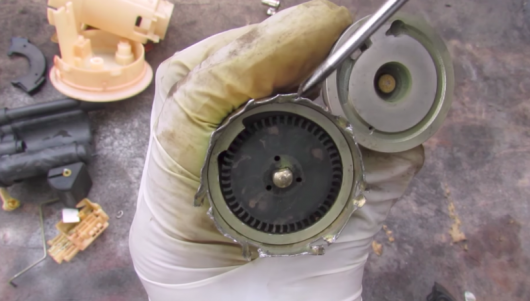 In addition to the problem of overheating and premature wear when the engine is running the car on an empty tank, the fuel pump is operating at low fuel level in the tank can suck the sediment at the bottom of the gas tank.

This is especially true in older cars, where, as a rule, used metal tank, which eventually corrode, resulting in the bottom of the tank can cause rust particles.

Also the sediment at the bottom of the fuel tank can come from poor-quality gasoline or diesel fuel. As a result, with the engine at minimum fuel level in the tank, you run the risk that the fuel pump will get the particles sediment.

Deposits in the fuel tank can clog the filter element of the fuel pump. Once clogged fuel filter, the engine cannot get enough fuel, causing your car won’t work.

Please note that the filter can become clogged immediately, but eventually. In this case, the flow rate of fuel in the fuel line will gradually slow down as long as the filter pump is completely clogged.

Including keep in mind that the slowdown of the fuel flow will also adversely affect the fuel pump because its motor from lack of fuel flow will not get sufficient cooling, which will lead to overheating.

If your car has a broken fuel pump, you will have to spend a considerable amount on the purchase of a new pump. In addition, you can change it yourself very easily. If you do not have experience in maintenance and repair of vehicles, then you will have to drive the car with a broken fuel pump in the technical center, where you can also get ready to give little money for the work of replacing the fuel pump. 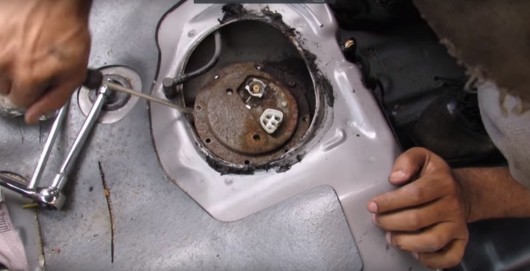 In older cars fuel pump replacement much easier. For example, in some old car the fuel pump is located either under the hood or underneath the car. In a more modern car to replace fuel pump need to remove rear seat, remove the cover covering the tank, etc., since the fuel pump is inside the tank.

So I do not advise you to frequently drive on an empty tank. So refill the car on time and don’t allow the fact that the tank had little fuel.