The incident involving the motorcade of the Governor of Vladimir region: video

We have repeatedly said that the problem of “flashing lights” is a problem in the minds of people entrusted with great responsibility. It so happens that the wedge powers, and they begin to create and up on roads that only hold on! Why Russia should ban the mod for many structures 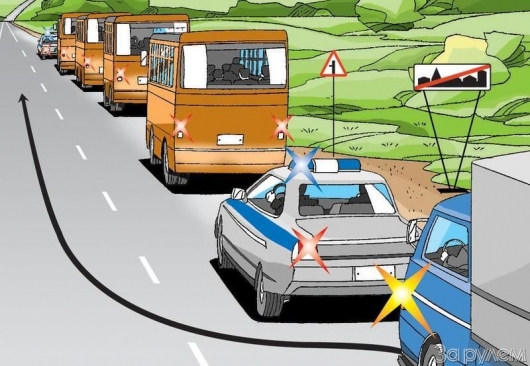 Here is one of the recent cases. The video was posted on YouTube only yesterday, but it already began with might and main discuss in the comments under the video, and show in the media. Here are the details published by a TV channel ren.tv:

The inhabitant of Vladimir region in social networks complained to the patrol car traveling on the highway M-11 in the direction of Nizhny Novgorod.

“We are catching up with the patrol car and zooms, we miss it and rebuilt it and it turns out it support. Oh, that he started to get up on the road, sudden braking, wobbling on the snow-covered road, an insult to our address.”

Here’s the full video of the incident posted on the TV channel “Russia 24”:

As aptly noted by one commentator under the name Iren Fone: “we had to pass BOTH cars, patrol, and following him. DPS did not want to “teach” the driver, they wanted he did not get up in a row between them and the Huber machine. Do not understand the behavior of trucks on the road in the left lane😏 the Word “retard” DPS uses. Would say in oralny to ignore the problems would not exist”.

Of course, organized a convoy to interrupt you, but it is not clear whether moving the car of the Governor in the singular or the train consisted of several cars, and this is important, because in General terms SDA spelled out the distinctive features of organized columns:

“Organized transport column” – a group of three or more motor vehicles following each other in one lane with constantly switched on headlights, accompanied by the head of the vehicle applied to the outer surface of the special color schemes and included flashing lights of blue and red colors.

If the patrol went just one car, of course the driver of the car with the DVR might not know that it is a tuple, so all of the claims, insults, and especially the creation of an emergency may well lie on the shoulders of the DPS.

According to UMVD across Vladimir region:

“In fact published on 11 February a number of online resources video with participation of employees of traffic police, has been appointed to conduct an internal review to establish all the circumstances of the incident. Currently, the crew of traffic police of the escorting suspended from the execution of these duties.”

In General, the evaluation will be conducted. But what results it will bring? Who will be punished in the confrontation, the driver of “Reno” or patrol? What do you think?