Museum of AVTOVAZ: the rarest models that are there.

Yes No used to like, now there had not Previously enjoyed, now I like still Go More

History: Museum of the Lada may show a variety of interesting prototypes 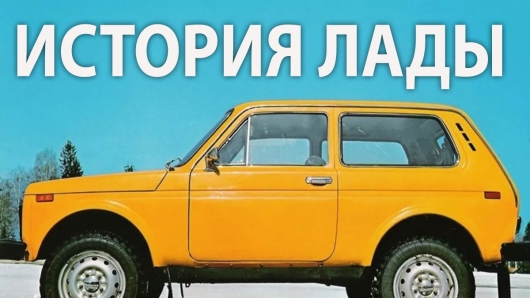 Among world automakers, the domestic carmaker Lada has not the best reputation. Lada is a cheap car a “no frills”. Lada classic of the late 80’s, 90’s and early 00-ies of the XXI century caused all sorts of feelings, not sympathy (not take a turn tuned to privately model some of which really looked very even nothing).

But really, the story of our automobile is much mnogogranen, more interesting and varied than it may seem at first glance. The proof of this is factory Museum. Where forever preserved dozens and dozens of production models and prototypes and standardized a unique sports car. Some of them have not had the opportunity to reach their full potential, others managed to reach the heights in sports, and still others have become “workhorses” in millions of households not only in CIS, but also abroad. 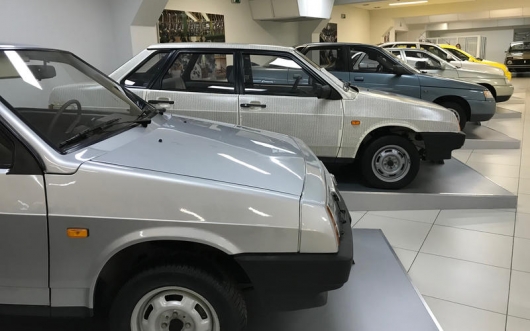 The Museum is located in the city of Togliatti (until 1964 was called Stavropol), on the ground floor of the academic College of AVTOVAZ, which is geographically close to the entrance of the plant. The town is named after the Italian Communist Palmiro Togliatti, AVTOVAZ is the main enterprise. Reminder of what it produces Lada can be seen everywhere from the huge statues of the Lada, to sponsorship of the hockey team “HC Lada Togliatti”.

However, the Lada Museum itself is relatively small, with two rooms, showing a selection of some of the most significant models and the most daring concepts in the history of AVTOVAZ, Lada’s parent company.

By the way, if you are planning a trip to Tolyatti, then you will be pleased to learn that the Museum can truly be called national: the admission is free. 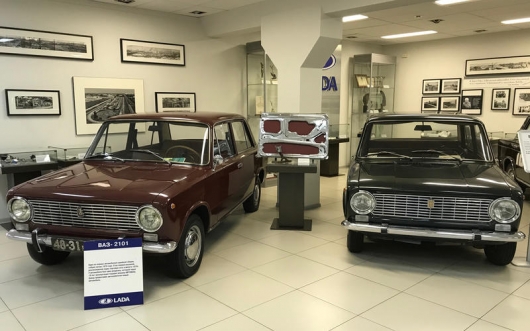 It is noteworthy that the VAZ honored tradition, and the original that started it all, so close to the first-born of VAZ-2101 stands proudly of his Italian predecessor – 124-I model Fiat.

Externally, the model is almost not different, but technically they are really different. The conventional Fiat would not survive the then reality would fall apart. VAZ “Unity”, on the contrary – lived and did not sneeze. It was mounted aluminum drum brakes, raised suspension, extra strengthening in the body. Under the hood was also new, Russian-made 1.2-liter engine.

The car was hit in the Soviet Union, and soon began to be exported to other markets. “Penny” went on sale even in the UK in 1974, including exotic for the Soviet Union versions of the engine, including GM-built 1.7. The price tag in Britain started from £979. In other countries the model also went, geography was extensive. 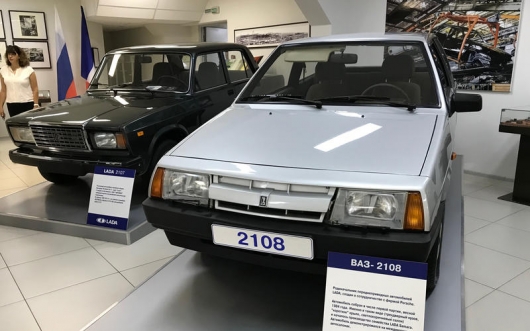 You know this model – the Riva? Don’t know how?! But it is a direct successor to the “Penny”! Better known to us – 2105. The model was produced under different names: Nova, Kalinka, Laika, Matriuska, Signet and Sputnet for different international markets. Went into production in 1980, but its angular forms lurks VAZ 2101.

Interesting fact: Riva sold in the UK as long as the toughening of legislation on safety and emissions have not led to its withdrawal from the game, however, as is well known in our country model remained in production until 2012.

VAZ 2108 (right) was another model with a variety of names: the model was called “Samara” in Western Europe, “Sputnik” in Russia and a number of other names in other places implementation.

Commissioned in 1984, this front wheel drive hatchback was designed to appeal to the main internal market and European market. Produced from 1984 to 2013. 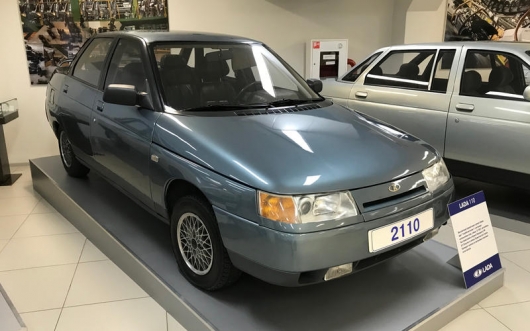 Remember him? This car was produced from 1995 to 2009, the aerodynamics was developed with the help of Porsche engineers. The first model was shown in 1991, but well-known events in the country and surrounding this economic crisis has delayed the beginning of production models with a 1.6-liter engine. For a sedan followed by a wagon (111) and hatchback (112), late model upgraded and renamed in Priora. 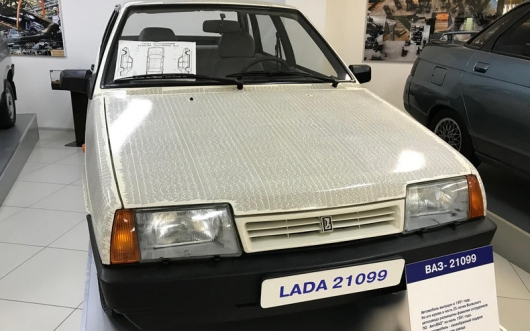 Samara 21099 version was released in 1989 with a new bonnet and radiator grille and several improvements to the interior. The model was designed as a more premium offering “Nine.”

The version in the Museum is covered with names of employees of the Tolyatti factory involved in its production. 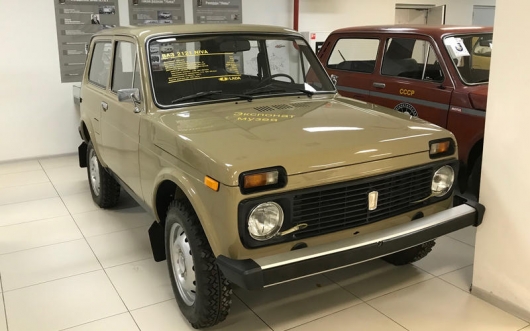 Perhaps one of the most famous Lada of all, and certainly the most revered model in the West. Until now! Niva was launched in 1977 and still in production virtually unchanged. Designed as a real off-road car for rural and remote places, it was innovative, but inexpensive SUV with the architecture bearing body and independent front suspension.

Although it was the first model of AVTOVAZ, is not based on Fiat, and it was distinguished by its own unique wheel-drive system, the world’s first superconductive crossover borrows a lot of mechanical parts from earlier models and Fiat 124 derived Lada models. 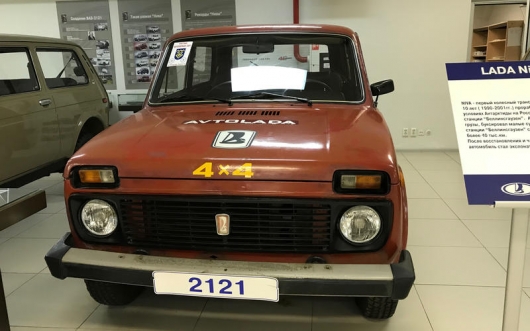 The car “Niva” was at the North pole at least three times, and was used in expeditions to Everest and other mountain regions. This particular car was used by the Soviet Antarctic expedition. The car has spent over a decade fighting with the cold weather the inhospitable continent.

The car has survived… even in the eternal ice. 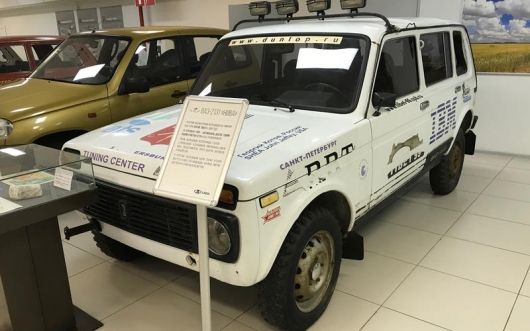 All the same, but with five doors. In 1995 was followed by an elongated five-door version VAZ-2131. While the increased wheelbase and the additional weight meant that many did not consider it good for off-road driving, it was still cool for hard to reach areas: this model was used for the 1999 expedition in the Himalayas, reaching the world record height 5 726 meters above sea level. 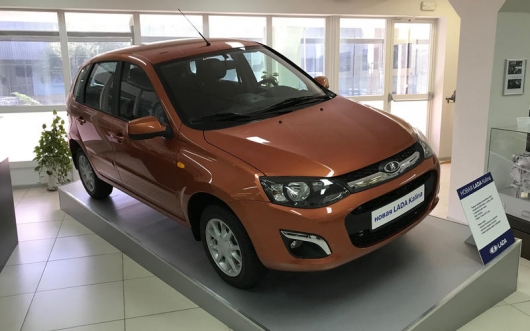 Kalina supermini was launched in 2004, although initially the development of the model began in the early 1990-ies!

The name “Kalina” doesn’t cut Russian ears, but in Finland the name is not used because it is translated from Finnish as “rattle”. 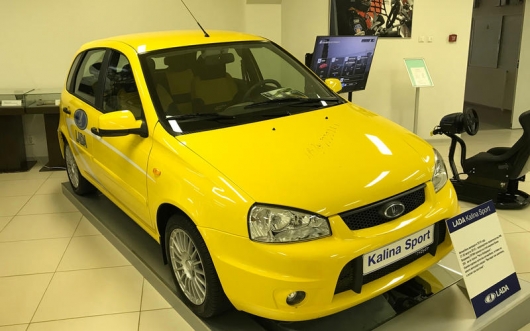 The first generation Kalina Sport was produced from 2008 to 2013 and was one of the first sports models Lada for every day. The hot hatch used a modified version of the 1.6-liter engine Kalina. Lada actually showed a concept car rally car Sport Kalina Super 1600, although it never got to the real competition. 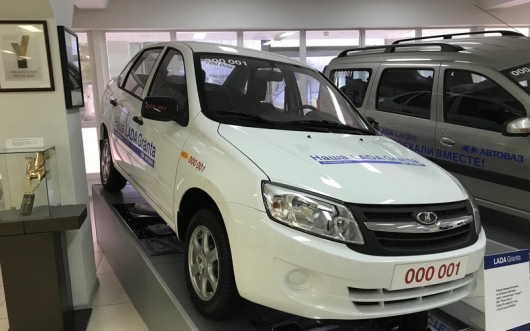 Project Granta was launched in 2011, becoming the first connections of AVTOVAZ with Renault (a French company now has a controlling stake in AVTOVAZ). It was based on the platform of Kalina and quickly grew from tight pants to become a bestseller, Lada – and grapple with the Kia Rio in the Russian top the sales charts.

Presented at the photo car as follows in accordance with the license plate, was the first released from the factory. 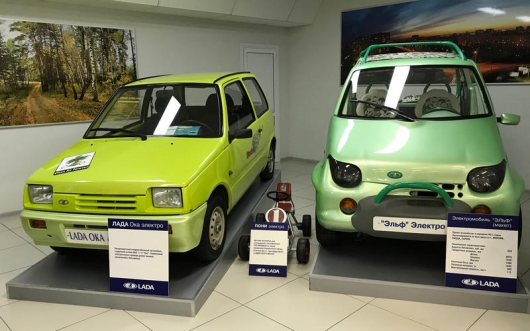 Yes, there were electric Frets. Oka (left) – city micro-car, only developed in 1988. Most of the copies were equipped with a 650 CC two-cylinder engine.

AvtoVAZ showed the battery electric version in the next release after the beginning of the year. The EV version was produced in limited numbers until 1998.

It differed 120V batteries standing in the front and rear parts of the vehicle. The range corresponds to about 90 km.

The concept of Lada was Elf (right) developed in the mid 1990-ies and had the same drive system that Electric and Oka, with a limited maximum speed of 90 km per hour. The style was inspired by the design of the beach buggy. It probably was.

The concept Lada – Granta is the “Fifth” model 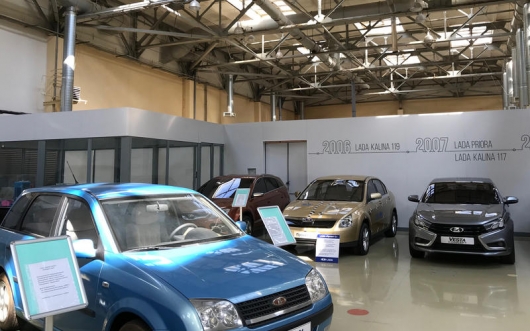 The second hall of the Museum dedicated to Lada of modernity, the concept of Karam and sports car. VAZ 2151 (in the foreground) was presented at the Moscow motor show in 2002 and was developed to demonstrate the replacement of the Five. Similar to “Grant”, and then! 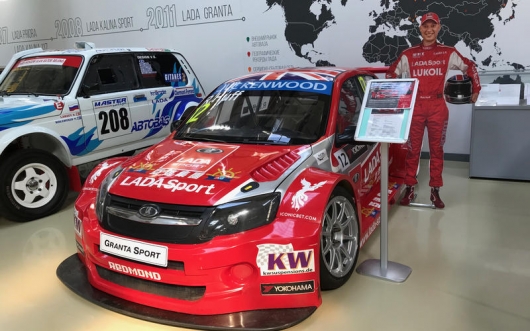 Lada Granta participated in touring car championship WTCC and even in one of the races received a “silver”, winning second place on the podium, beating BMW, Seat, Chevrolet and Honda.

With the support of the factory team Lada Sport with varying degrees of success moved up the competitive ladder among developed racing versions of the best brands in the world. With the last places for years, the team went to the top. The tenth, seventh, sixth and fifth place in the Championship. One even reached second place at the end of the race.

In the course of the competition was made a huge number of improvements in design. Don’t know for sure, but most likely some of them were made in the design of the production model. No wonder she’s so reliable (in General). 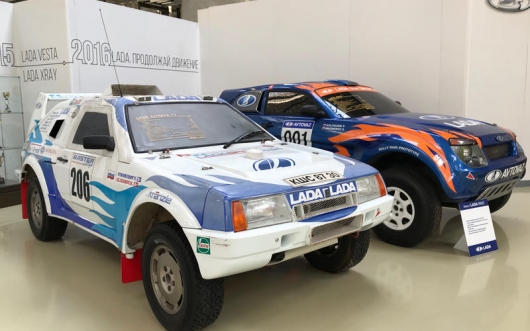 Considering the skill of Lada in the production of SUVs, it is not surprising that many of the sports achievement of the firm was achieved in rally-raids, the highest of the sport, such as the Dakar rally. Samara T3 Sport finished in seventh place in the rally Paris-Dakar 1990 and fifth a year later. Behind the wheel in both cases was a racing driver Jackie Ickx.

But in fact, this vehicle did not contain so many Lada parts: it had all-wheel drive system Porsche 959 and opposed six-cylinder engine from the German.

As a rally car from the USSR got the engine from a Porsche? http://www.1gai.ru/publ/521181-kak-ralliynyy-avtomobil-iz-sssr-poluchil-dvigatel-ot-porshe.html 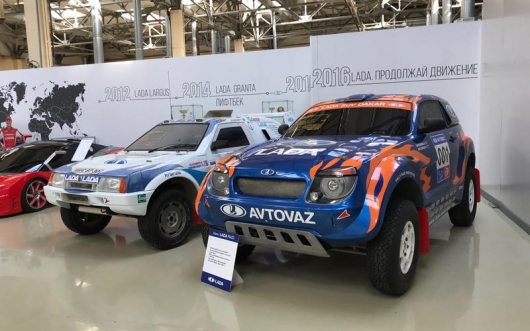 This concept was presented at the Moscow motor show in 2006 for the 30th anniversary of the launch of the “Niva” – was built in the framework of the plan of Lada participate in the Dakar rally 2008. The model was a 3.8-liter engine with a Porsche six-speed sequential transmission. The headlights were round – to give respect to “Field” in 1976, and over them was “eyebrows”, another nod in the direction of the original design of “field”. The Dakar plan was never carried out, and the only “RAID”, which was built and exists in the world. 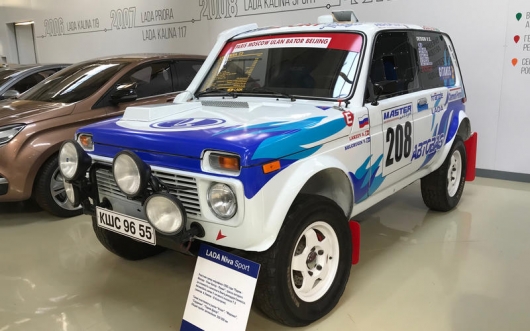 Niva T3 was also built for rally, this time in the marathon Paris-Moscow-Beijing. Won Mavad Magyar Raid-4 in Hungary in 1991. 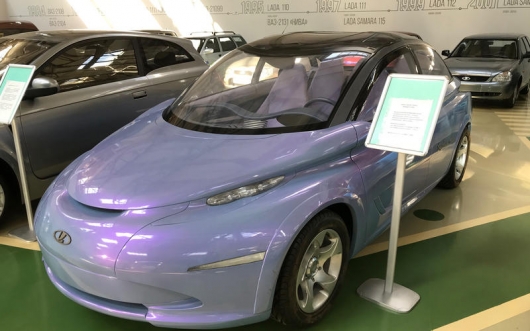 This automotive oddity – the concept of 2000, was developed by AVTOVAZ to demonstrate the large car with the emphasis on aerodynamic efficiency. A very strange concept. 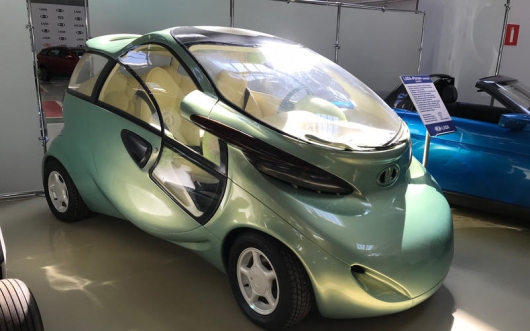 Let’s see the truth, when designers Lada decided to go with concept cars, they did indeed worthy or strange model (underline). Rapan is an electric concept that was released in 1998, apparently, partly in an attempt to generate interest in infrastructure development of electric cars in Russia.

The unusual design included all the controls on the steering wheel and windscreen a very large picture window. Another notable feature was the extra Windows built into the bottom of the door to help in the Parking lot. Recently a similar option we saw on the McLaren Senna… 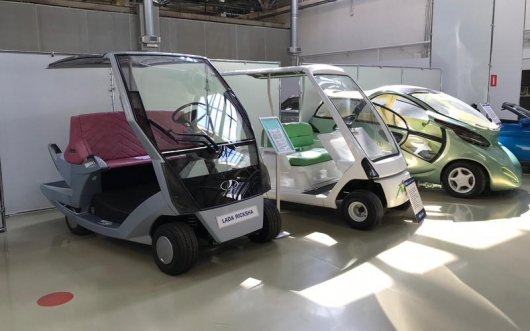 Lada made a number of concepts Golf carts. This electric concept dates back to 2002. It was FWD and had floor panels that helped reduce the center of gravity.

The Concept Of Lada Roadster 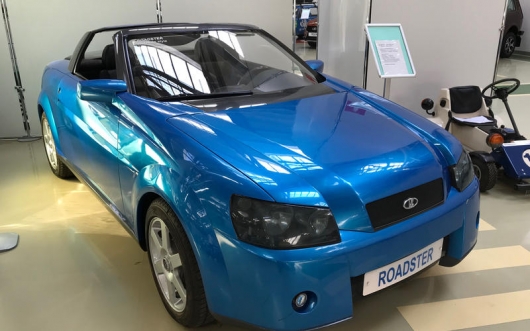 The concept 2000 was designed to show the athletic side of the Lada, was a picture of how it might look double Kalina with a removable hardtop. The car had a two-liter 16-valve engine and driven up to 100 km/h in around 9 seconds. 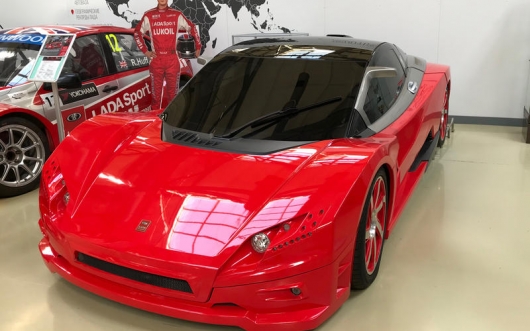 The first Lada Revolution sports open – top prototype was developed in 2003, and then two years later appeared an improved version called “Revolution 2”. In 2008, the UK has made the third version. It was a double Roadster is equipped with a 2.0-liter turbocharged engine capacity of 242 HP combined with a lightweight body – exterior panels were made of plastic – the car accelerated from 0 to 100 km/h in 5.9 seconds. He was even tested on Nuburgring Nordshleife.