Mazda revealed the new “Three” and she looks very cool! 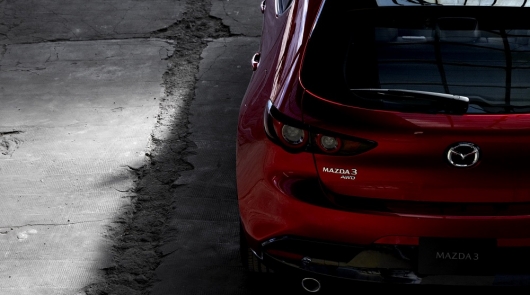 After the leakage is not very high quality photos of the new Mazda3 hatchback, Mazda decided at the official screening of a new generation of folk in many countries of the hatchback.

Represented a Japanese official photos along with a description in the style of haiku, which compared the “Three” Mazda “dawn of a new era”. In some ways they are right and in their words no excessive pathos. Redesigned model is an important tool for the further promotion of Mazda as a tech and stylish automaker, because it is their first car using the architecture of “Skyactiv-Vehicle Architecture” and new gasoline engine “Skyactiv-X”. The last unit is equipped with an ignition system of a Spark-Controlled Compression Ignition (SCCI), which promises to combine the best characteristics of both gasoline and diesel engines.

But Mazda would not be itself if the Japanese automaker didn’t seek to use a new interpretation of the Kodo design language. The automaker says it made an extremely simple “one move” in its overall body shape, which was elegant and expressive. 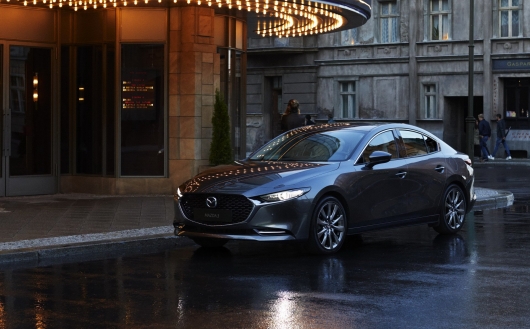 Indeed, the sedan and hatchback have an evolutionary design, but the sedan was the real star of the show, as it has adopted many elements of style from the concept Coupe Vision.

From the front, where we see a prominent grille with large chrome inserts, literally numb for a narrow spotlight, continuing the dynamic and deliberately simple (for the style) body and ending with a dynamic back, which is also quite athletic due to the presence of the tapered rear lights, integrated trunk spoiler and dual exhaust system. 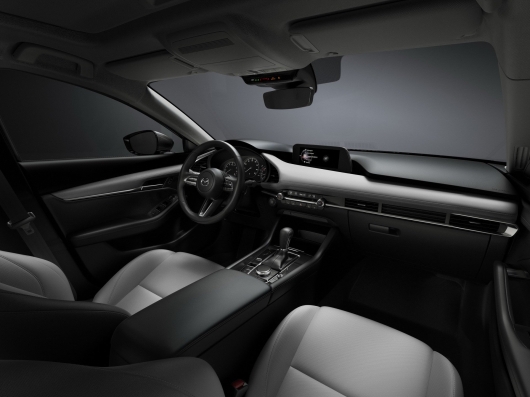 Yes, the exterior design is evolutionary, but the internal changes are more significant, because the cabin was more upscale than its predecessor. In the cabin visible approach: “less is more”, which led the car to the emergence of a completely minimalist design.

Key elements of the new interior are the steering wheel with three spokes, independently rising above the torpedo 8.8-inch infotainment system and made an unusual overlap the top of the trim on the lower contrasting element of the front panel. Mazda also florid again noted that the elements of the interior got its own unique grain, which “is designed to Express the richness and warmth of genuine leather”. 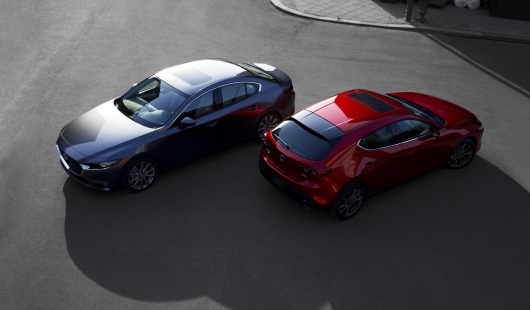 Under the hood will be presented with a range of different engines depending on the market. Mazda did not mention the specification, but confirmed that it will be 1.5-, 2.0 – and 2.5-litre petrol engines and 1.8 litre diesel. Powertrains will be combined with the new M Hybrid, which “will support the large gains in fuel economy and will reach higher levels of driving pleasure and environmental friendliness.”

As for dynamic characteristics, the Mazda3 will be offered with improved all-wheel-drive system i-Activ, which will work in conjunction with the new branded G-Vectoring Control Plus, which recently debuted on the CX-5 2019. The car also receive a new suspension that uses MacPherson strut front dampers and a newly developed version with a torsion beam rear.

Mazda says these and other changes allow the car to accelerate, turn and slow down so that “you will feel natural and intuitive to use as a tool that you use for many years.”