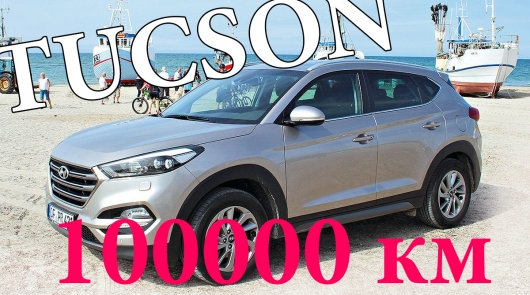 During long-term tests with a length of over 100,000 km Hyundai Tucson showed all its advantages, the main of which was its reliability. For the long test found only one small drawback. 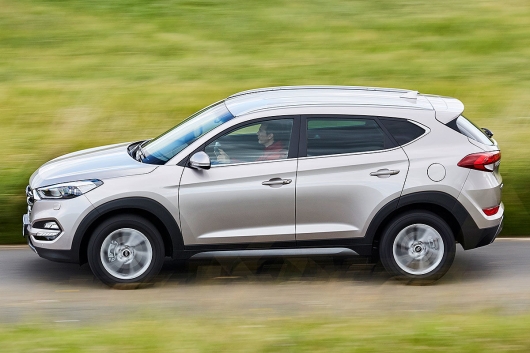 June 2016, German magazine AutoBild starts the test cycle of the Korean crossover is named in honor of Tucson, located in Arizona (USA). In Russia the name of this urban SUV, not only as interpreterpath: “Toussaint”, “Tusan”, “Tuksan” or in American parlance is called the ix35 model, the essence remains the same, the popularity and the reliability of this factor is not affected. 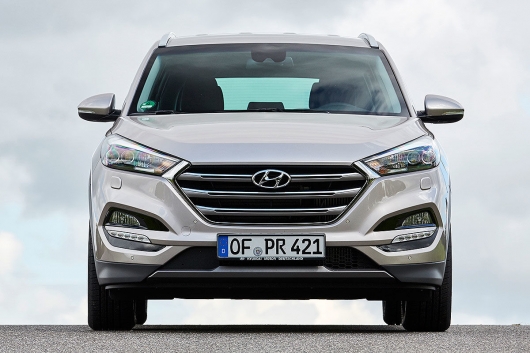 Here’s how to describe the first acquaintance with the crossovers in Germany:

“This is a boring crossover, primarily because of its faded color “a white-sandy metallic” – but that hardly matters to the user characteristics. It quickly won the sympathy of Koreans, now it is built for Europe in Slovakia. SUV model, as a colleague, has many inner values that compensate for the lack of visual and emotional unique.

One of these factors is a powerful diesel (despite the average volume of 2.0 liters), which is unanimously praised as “lively and quiet” power unit. The motor has a high “shelf” torque even in sixth gear at high speed he still has room for maneuver. Indeed, the engine is Euro 6 four-cylinder has extremely high levels: instead of the promised 136 HP, on a test dynamometer, it produces 148,9 HP, that is higher than the official data is almost ten percent!”*

*Why the 2.0-litre CRDi engine in Germany, a total of 136 horses, for us remained a mystery. Whether the Germans made a typo in his article, or two-liter diesel engines “strangled” environmental regulations. We have in the country sold the same turbocharged engine, its power output is 185 HP Really should note that it corresponds to norms of Euro-5. Maybe that’s it. 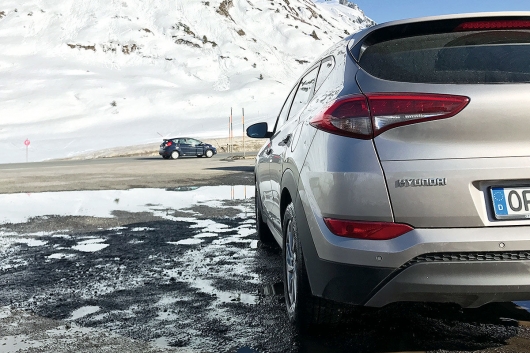 It is always nice when for the same money get the advantage of power.

All-wheel drive for the crossover is required? 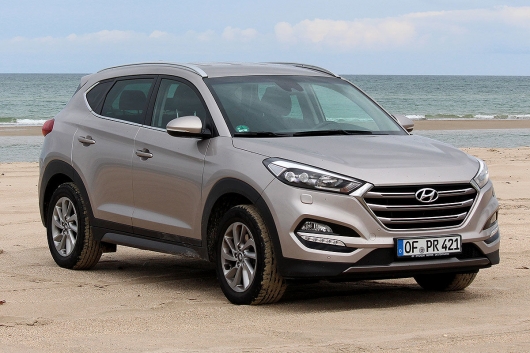 Economically, the fuel consumption, the model remains at the level of 7.3 liters / 100 km in real conditions on highways and cities of Germany. In the tests dominated by urban trip. Factory consumption at 4.2 liters on the same 100 km (according to the magazine AutoBild), the crossover is very far away. And, frankly, unattainable this figure for the average driver. Technically, diesel is quite economical. 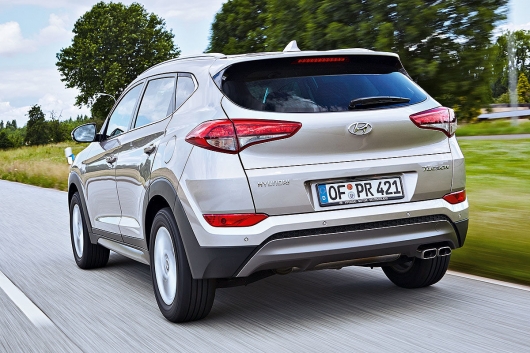 If you travel mostly on the highways between cities, the flow rate can be reduced to 6 litres, which is also a good indicator for the 1.6 ton car with not the most ideal aerodynamics and a modest amount of motor. 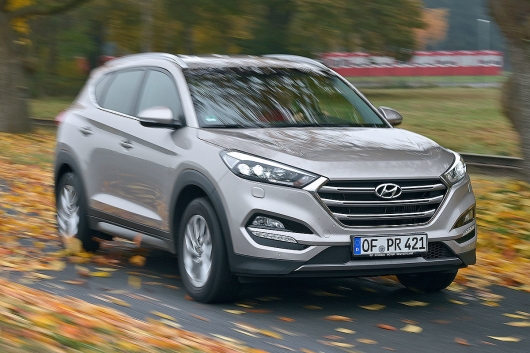 What really lacks crossover is all-wheel drive. First, it is logical to buy a crossover with all-wheel drive, and secondly, in the snow, and when riding on gravel or Packed dirt roads the all-wheel drive version will not be a burden. Selection by the editors of the vehicle, the journalists appreciated skeptical: “quite embarrassing” – especially since all four wheels would have cost just for 1.900 Euro more. 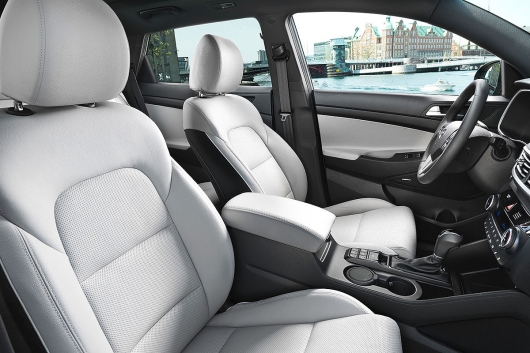 A small consolation: despite the fact that already at 1.500 rpm to the front axle comes decent peak torque, the imbalance in the car’s behavior has not been observed neither rain, nor snow or other difficult weather conditions.

The salon is spacious, but at the same time very homely 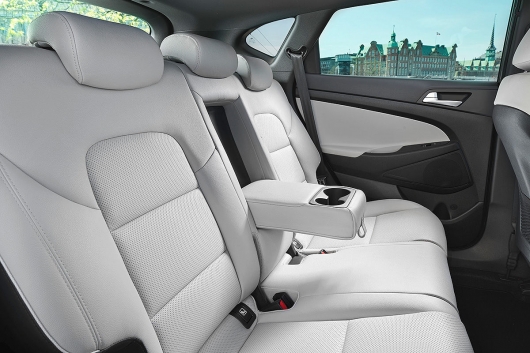 It is noted that the dynamics in the development of the car was not in the focus of the creators generally comfortable compact SUV. However, even when using equipment with a small diesel powertrain is sluggish SUV just can not be named.

In Tucson, many of the tested vehicle the test (recall that the model was driving on the German roads for over 100 thousand km) I noticed the progress in governance compared to the previous versions of the car from Korea: “the feedback and reaction to taxiing are much better,” says the magazine. 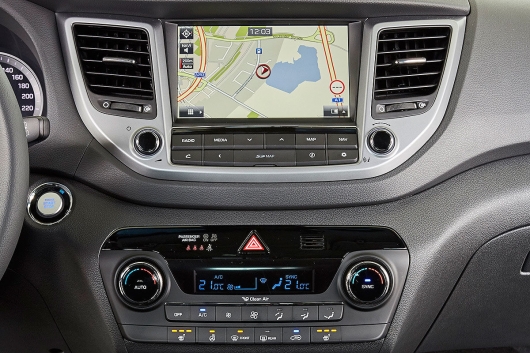 Note choosing between b/y counterparts. The space inside the 2015 model has more. It’s noted that it’s even more compared to some competing models higher office: “unlike many other SUVs, the internal volume of Tucson in a good way does not correspond to the external dimensions”, praised the Germans, the management of the internal volume of the Korean designers. Model, in their opinion, no less than more solid classmate – Kia Sportage. 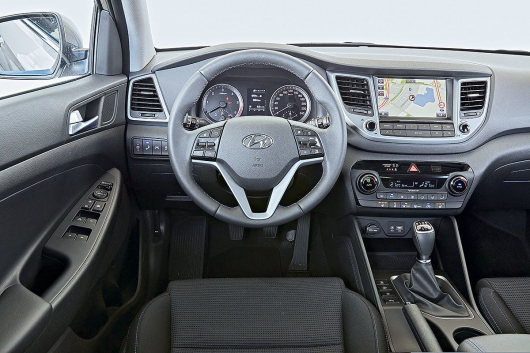 The only minor drawback, which drew the attention of the Germans – the high line of the rear side glass. The children will be transported in the back will have to look at the beautiful views out of the window and door trim. Also suffers a bit from this side the view through the shoulder. However, in our opinion, it is possible to calculate the feature model. We all know that beauty requires sacrifice, and sacrifice a more appealing appearance was found.

Functionality electronics good for the model, developed over three years ago, but by modern standards in a rapidly changing automotive field “is definitely not enough high-tech devices.” 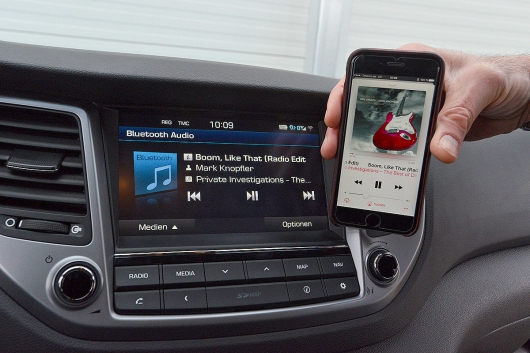 For example, one of the claims read as follows: “Pairing with Bluetooth mobile devices is predictable, the disadvantages are the loss of the last played track when reconnecting the device carrier information. Instead of a playlist starts playing radio”. Interestingly, on the “domestic” TUCANO has a similar problem or has something to do with the infotainment system installed on the model for the European market?

Tucson is not friendly with electronics and the fifth door 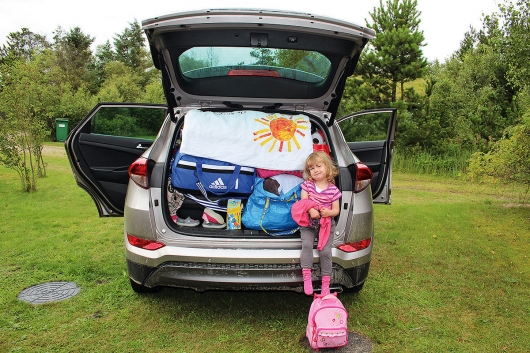 Under criticism got poor main beam, as well as vague and unpredictable operation of the rain sensor.

Steadily irritated during the whole time he had been broken in the electric tailgate. When he wants to open, when you do not want, remains closed, denying access to the trunk, the owner, do not wave your foot under the rear bumper, in search of the sensor. Why, for Germans it remains unclear. Malfunction “corrected” itself, the error code is not read. 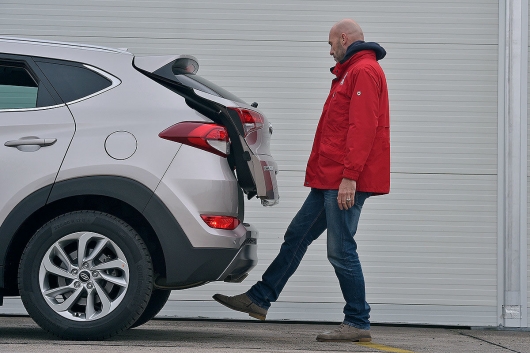 As later explained to motoring journalists Director of quality Hyundai Juan Carlos Quintana, the problem could be solved by re-adjusting the rear doors.

Even after 100,000 kilometers Tucson runs boticca Unscheduled visits to the service station are missing for the entire two-year lifespan.

1. Replacement brake discs and pads on 62.576 kilometers falls into the category of “normal wear”

The costs of the parts and maintenance are similar to their Western competitors. However, Hyundai gives a much more generous warranty. It lasts five years with no mileage limitation.

By the way, she has covered the work on the replacement of prematurely worn-out cuff reducer of the rear bridge, which has died at 89 thousand miles. 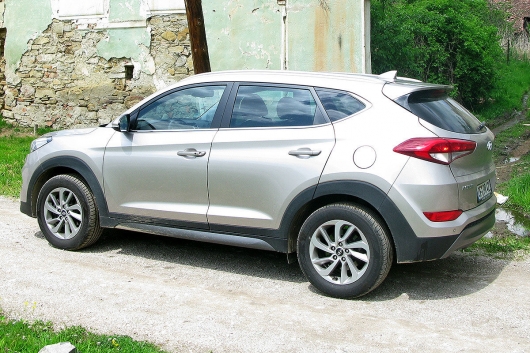 Otherwise, the signs of fatigue Tucson is not showing even after 100,000 kilometers, “with the exception of some natural markers of wear and tear in the cabin, the crossover looks surprisingly fresh,” he said in AutoBild before the SUV went on to complete disassembly.*

*Have one of the oldest German car magazines such a feature. At the end of the tests, the car is completely disassembled in search of a identify issues: 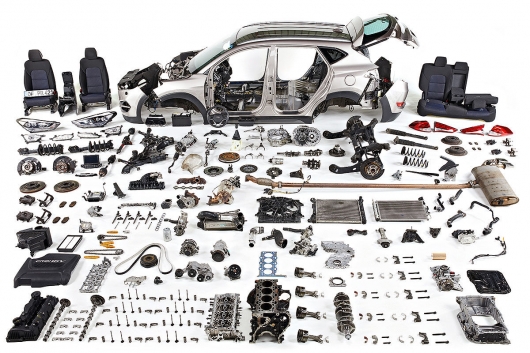 The curtain of Hyundai is still easily conquered specified by the manufacturer accelerates from 0 to 100 km/h. Diesel was brisk, like the first day. 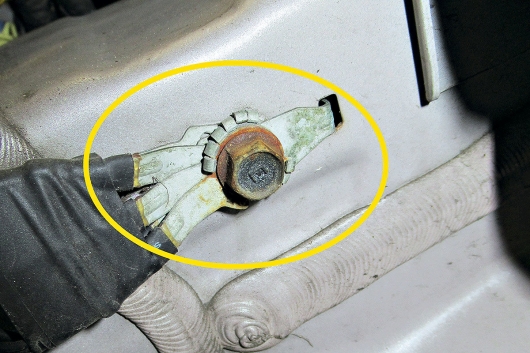 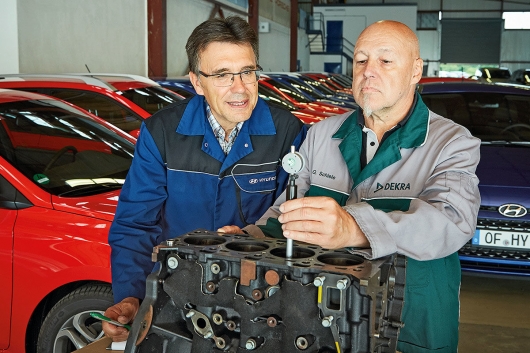 But the engine after 100 thousand km showed that load enough for him. As it was like new. 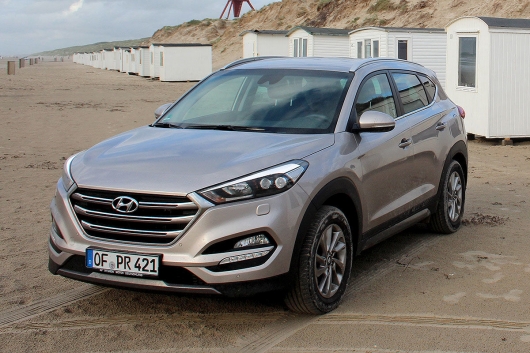 Summary: Hyundai Tucson showed his best side in all respects. You can take. Russian owners is also a concern. 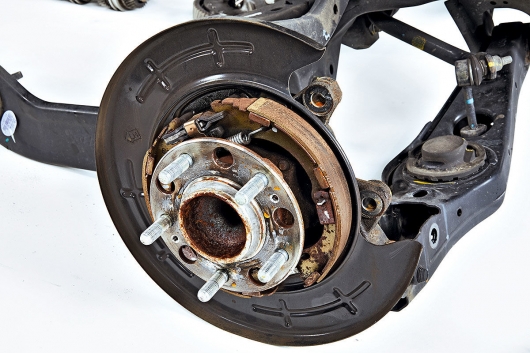 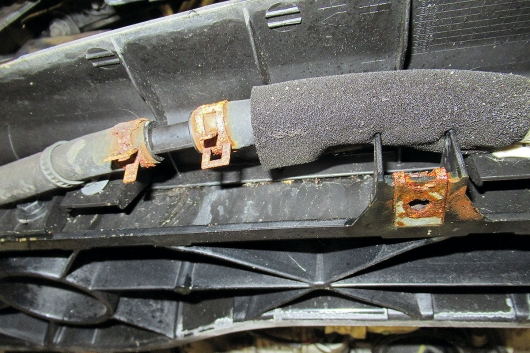