The incredible skill of the helicopter pilot.

What is the worst thing for any lover of skiing? Of course, to fall, get hurt and be stuck high in the mountains. This is what happened to a skier in the Alps at the beginning of this year. A skier had suffered a knee injury that prevented him to continue the descent. In the end, the skier had to be rescued from the mountain by helicopter. But there was a problem with the helicopter landing. Incredibly, the pilot managed to do the impossible. This type of planting is the most difficult element in the management of helicopter.

The video was posted on Facebook by Nicholas Dereli, who was skiing with a group of friends. According to CNN, one of the skiers (and their friend Bruno) during the descent from the mountain fell and broke his leg at an altitude of over 2 km above sea level. But friends Bruno managed to make an emergency call. Was eventually organized a rescue operation, which you can see in the video: 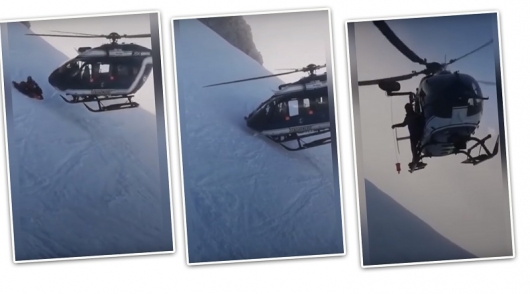 Such things are known as the landing at the top. You probably like that seen in a war movie and like to evacuate soldiers from the mountain slopes. The principle of operation is quite the same. By the way, the rescuers working at ski resorts and helicopter pilot, there’s a whole guide how to implement the kind of rescue people stranded in the mountains.

If you have a helicopter does not suggest to repeat the trick. It’s aerobatics, which can realize not all pilots. Look how close the blades spin the engine a few inches of snow. Composure of a helicopter pilot not to take. It is impossible to look without emotion.