Leaving the intersection with vafelnitse without it: the Penalty in both cases?

That is why it is impossible to go not only to the intersection with waffle layout. 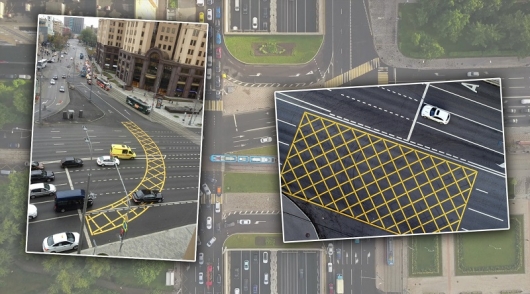 Lately after appearing on the intersections of wafer marking and, of course, cameras of traffic police began a mass mailing of letters for the exit of cars at the intersection. And it is logical. Not to power up the new layout to spend budget money without the possibility to recoup. Well, okay. Today we want to talk about waffle markup, the appropriateness of which on roads of Russia there are doubts, and in General about the violation of the rules out on any intersections.

The fact is that after the introduction of the waffle markup in traffic many motorists began to think that to go to the intersection where congestion, not only in the case if it is drawn wafer layout. But it’s not.

Recall that the wafer marking (1.26) denotes the area of intersection at which drivers are forbidden to travel, if the front of the car, where it runs a route, a traffic jam, causing the left at the intersection the car would have to stop, creating an obstacle for movement of vehicles moving in the transverse direction.

Many drivers (especially beginners), once on the roads of Russia began to appear the wafer marking, mistakenly thought that the prohibition of an intersection now applies only to those road segments where applied’s wafer marking, forgetting that according to paragraph 13.2 of the SDA of the Russian Federation it is forbidden to go to the intersections not indicated by the wafer layout.

13.2. It is forbidden to leave the intersection, the intersection of roadways or of a section of crossroads, marked markings 1.26, if there is EN route congestion, which will force the driver to stop, creating an obstacle for movement of vehicles in the transverse direction, with the exception of turning right or left in the cases stipulated by these Rules
(clause 13.2 amended by the decree of the RF Government dated 20.10.2017 No. 1276)

Article 12.13. Violation of the rules of journey of intersections

1. Check out the intersection or crossing of a carriageway in case of the formed jam which has forced the driver to stop, creating an obstacle for movement of vehicles in the transverse direction, shall entail the imposition of an administrative fine in the amount of 1 000 rubles
(as amended by Federal law from 21.04.2011 N 69-FZ)


2. Failure to meet requirement of traffic Regulations to give way to the vehicle having the right of priority of journey of intersections, shall entail the imposition of an administrative fine in the amount of 1 000 rubles
(as amended by Federal law dated 22.06.2007 N 116-FZ, dated 21.04.2011 N 69-FZ)

Accordingly, no matter what crossroads in the formation of a traffic jam ahead of the vehicle (on the way) you went. Created a disturbance transverse to the transport, when leaving congestion at the intersection, means a traffic violation. No matter, whether at the crossroads of the wafer layout. 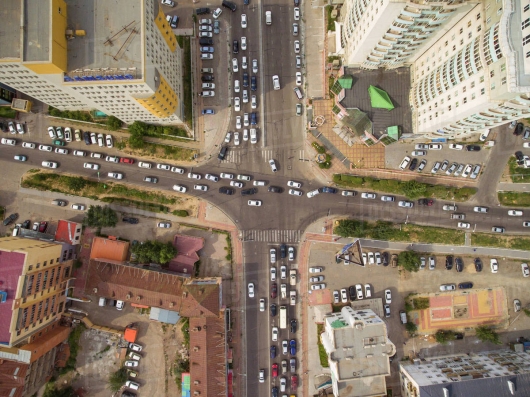 This was necessary to improve the situation at complex intersections in large cities, where there are often large hours and many kilometers of traffic jams. Denoting such intersections waffle yellow markings, the authorities expect that drivers will be less likely to break the rules of journey of intersections.

But the real reason for the introduction of a “waffle iron” on the road, of course, more trivial. “Waffle iron” was designed to in the areas of the intersections marked with this designation, place camera photo and video, specifically tuned to control the rules of journey of intersections. Without wafer marking to do it was technically difficult and expensive.

In the end, “waffle iron” made it easier for the authorities not only to regulate the traffic at intersections, but also gave the opportunity to significantly replenish the budget at the expense of the party of letters that began in batches to many motorists, who left at the crossroads on the wafer layout.

And worse, many drivers, in fact, get penalties for nothing. Because at the crossroads there are situations when even though the driver stopped at a waffle markup, in fact, he does not violate traffic rules. That is why, as a rule, all materials are photo – and video fixing of violations on the wafer marking shall be checked in manual mode and not to stand up for automatic flow, as is done with the speed cameras.

So good luck on roads, and don’t forget: exit at any intersection is prohibited, unless it is congestion.