Which is better – used car or Lada Vesta? 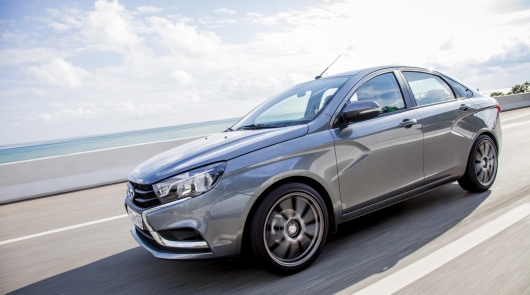 Lada Vesta for three years! On the one hand, we can say: how time flies! But if you look at the issue from another angle, it is possible to state an absolute fact: November 2015 (date of commencement of sales of the Vesta) is a new home model not only has not lost its relevance, but even increases its popularity. All of this says about the successful consolidation of design and technical components of the model. Is it really so?

If the appearance of the novelties of AVTOVAZ few of motorists have questions, from the technical side with the machine is not so clear. You want time to gather information and feedback about the new product from its owners, but the work of professional analysts of large companies that track the market. The time has come. CarPrice research Department calculated the points to the exploitation of domestic sedan, compare it with cars from budget segment and made interim findings.

How did the exam What?

Professionals online auction noted that, before cars “Vesta” put up for auction, they are studies 600 various parameters. Thus is a huge information library for all the most important components of a car and the degree of their wear resistance.

Scores a five-star system exhibited by four parameters: “Body”, “Salon”, “Technical condition” and “contributing factors”. The maximum number of stars – 20, which corresponds to the car is in perfect condition.

So, comparing domestic “almost cars” with the cars on the Russian market budget models.

That Lada Vesta on the body?

According to the results of studies of Vesta received the highest marks compared to foreign models.

“Buyers of Russian cars traditionally complain about the color, which leads to rapid corrosion”, – said in a press release. At the last inspection of the cars present were chipped on the hood and front fenders, including large scratches on body parts. This indirectly indicates that too high-quality color, sums up the “Karlspreis”. Among the Hyundai Solaris (first generation, facelift) Kia Rio first up – and-poliestireno generation, Nissan Almera, Renault Logan, known for its problems with the paintwork, and two VW Polo of the fifth generation of Lada Vesta scored the lowest score of 3.33. Although it should be noted that the gap between the competitors is not too large: 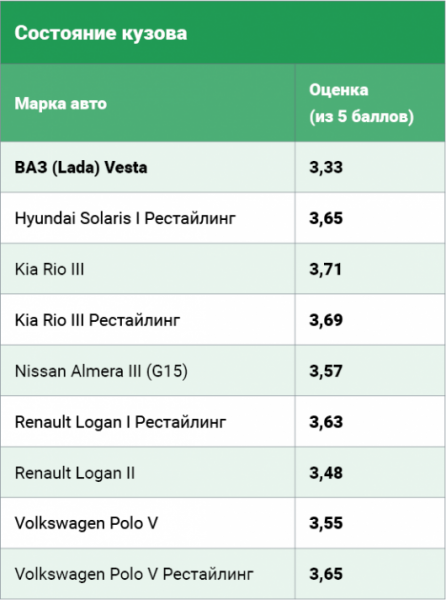 But then the spices soothe those motorists who wish to purchase a used version of the popular Russian model: “With the technical part of this car everything is good – the condition of the units of this car even better than the models that are considered “unkillable”. The third examined by us, Vesta had a serious clutch wear and non-standard work “the stove”, about a quarter showed an increased vibration when the transmission is shifted”. Short-lived shocks and sagging rubber silencer is another distinctive feature of three Lada Vesta.

Here Vesta was overtaken by the quality not only of the Renault Logan two generations, but also left behind the Nissan Almera and even Volkswagen Polo: 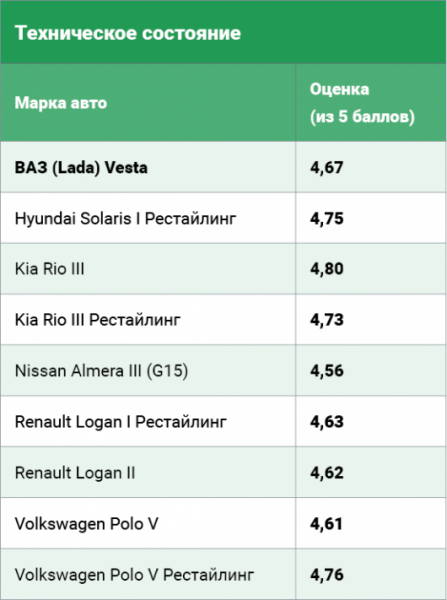 But the salon Vesta 2015, everything is just perfect. From past pre-sale research auto competitors among foreign cars is not revealed!

“To proprietary disease models can probably be attributed, perhaps, fast abrasion of the steering wheel. And altered upholstery and a variety of pollution – it is a feature of the operation of specific machinery”, – sums up the state of the interior after three years of operation CarPrice. 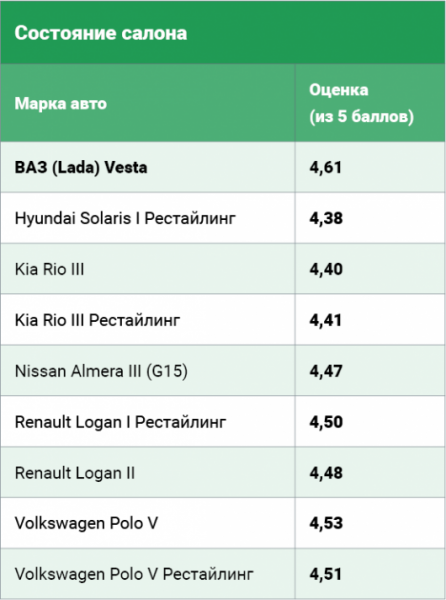 In General – good. Vesta in its class for the amount of water – solid middling. The average price of a three-year machine comparable to the price of the Nissan Almera and Renault Logan II, but Vesta is much cheaper than Volkswagen Polo, Kia Rio and Hyundai Solaris. Another plus is the less expensive parts. Well, fresh appearance really distinguishes our model from import. 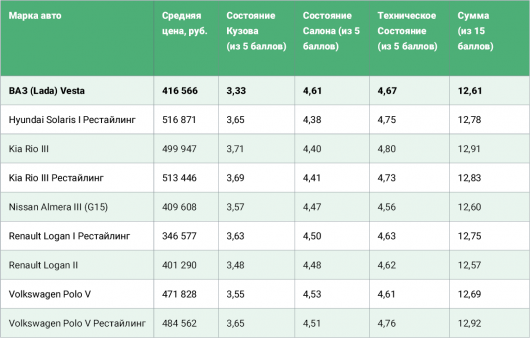 I wonder what will happen with second-hand Vest after four or five years? View a couple of years. Well, What promises to go back to Lada Vesta in a year when the secondary market will replenish with cars produced in mid-2016, with fixed “childhood diseases”.