Is it dangerous to refuel car with engine running

How dangerous is it to fill the car when the engine is running at idle?

Usually at all stations hangs a warning that fuelling of the vehicle must occur only with the engine off. But as far as really dangerous to run your car on a running engine? Let’s dispel the myths.

So, what do you think, is it dangerous to fill the fuel tank at the gas station when idling the engine? I hasten to please you that in the vast majority of cases to fill the car when the engine was running not dangerous.

Don’t believe? Then let us remember that it is necessary to have a fire. So, in order that fire requires fuel, oxidant (usually oxygen in air) and heat (ignition source). That is, in order the fire occurred, it is necessary that all three components had on each other impact.

Many will say that filling the car there are three main components that can cause a fire. But it’s not. Yes, when we fill the car, we even feel the smell of the fuel due to the vapors of gasoline or diesel fuel. But have no fear – the gasoline generally doesn’t burn. In fact, can only ignite gasoline vapors. And then only at a certain concentration in a narrow range – from 2 to 8 percent of air volume. When the concentration is less than 2 percent, the fuel can’t combust, because it is not enough for occurrence of fire. Moreover, even when a high concentration of fuel vapor contained directly next to a heat source and oxidizer, the risk of fire is also negligible.

As we have said, for ignition of the fuel also need an oxidizer. As a rule, the role of the oxidant performs the oxygen. Our air contains about 20 percent oxygen. So when you fill your car with fuel, you are surrounded by a sufficient quantity of oxidizer to the possible ignition of the fuel. But again, for ignition of fuel is needed third, the most important component, a heat source or igniter. However, in any car, there are several potentially hazardous sources of ignition.

For example, it is the starter motor, which consumes too much electricity and can create a hot electric spark. But the starter usually safely hidden in the engine compartment and is far away from the tank, which is mainly located in the rear of the machine. Besides routine motor starter is not engaged. So that the starter can not be a source of ignition of fuel vapor during refueling.

But the starter is not the only component that can be a source of ignition of fuel vapor. For example, high voltage spark plug wires and spark plugs have the function of ignition of petrol-air mixture inside the engine of your car. Those wires on the spark plugs is served tens of thousands of volts. Although the wires are well insulated but the insulation of high voltage wires is destroyed, resulting in theoretically, the spark can occur in the engine compartment and in the presence of gasoline vapors to ignite it. But it is hard to imagine the presence in the engine compartment of the necessary concentration of gasoline vapors.

For example, in the open air even if the fuel leak is unlikely in the engine compartment can be formed in the desired concentration of fuel and oxygen that appeared on the surface of worn wires spark igniting the gasoline vapors. Additionally, if your car is damaged high-voltage wires, then you have a problem starting the engine.

Especially in wet weather. Well, quite unlikely that when refueling the vehicle the engine was running on petrol fumes somehow Scopata under the hood, where a damaged high-voltage cables through which electricity flows, using spark will ignite the fuel. However, the probability of this is still there. Therefore, if the high voltage wire of your car are worn out, you need to change them for new ones as quickly as possible. This is necessary not only for safety, but also for normal engine start. After all, if there is a fault candlestick wires, you may face problem to start the engine. 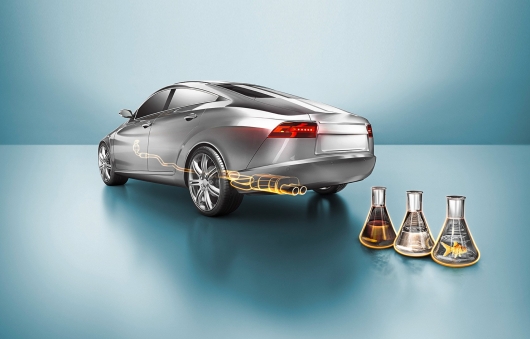 What about the other ignition sources of fuel vapors, which could theoretically catch fire during refueling of cars with the engine running?

Theoretically fuel vapors could ignite from the appearance in the car accidental spark. For example, from a faulty relay or loose fitting or oxidized battery terminal. Including spark may occur due to poorly installed electrical accessory (extra equipment).

But in real life at the petrol station it is unlikely that such a random spark can ignite fuel vapors generated during refueling.

But why then many of the drivers approaching the gas station, as a rule, turn off the engine of his car? Well, first, many of us see the warning at the gas station, refueling vehicles shall be carried out strictly with switched off motor. However there are many drivers who run their cars with the engine running. And nothing wrong with this, of course, is not happening.

However, in this case the tanker can be asked to turn off the motor. You also have the right to refuse to refill if you do not follow this recommendation. But in practice, most of the gas stations, despite recommendations to switch off the engine when refueling a car, drivers safely allow you to pour fuel with the engine running. You understand that if it were dangerous, you wouldn’t be allowed to refuel at the engine idle speed.

By the way, do you know why many drivers are still often off the engine at the gas station? The fact that many cars sit children, which may inadvertently shift the transmission. Can you imagine what would happen if your car is at the gas station with the engine running? Also a jammed motor for safety purposes. After all, there are cases when you leave to work the engine (the keys in the ignition), and in your absence I sit behind the wheel of the attackers and eyes steal your car.

As a result, many enthusiasts have developed for themselves a habit out of the car – pulled the keys out of the ignition. You understand that without the key in the ignition the car will not work.

Did you know that even in such a strict on the legislative level, a country like the United Arab Emirates, the ban of refueling the car with the engine running? It is even provided a large fine. But no one in the country practically does not fulfill the law. Most drivers in this country do not turn off the engine of their car when refueling at gas stations. Why? The thing in hot climates. After all, when the engine stops at the gas station in the car, turned off the air conditioning. That is why many drivers leave the vehicle engines are included at the gas station. The air conditioner in the car plows, as a rule, at full power.

By the way, in Abu Dhabi at the gas station you can often see people Smoking during refueling, sitting in the car and opening the window. Because of this it was the event of a fire at the gas station. But even in such cases of large fires and explosions never happened.

In General, if you are worried that your car will light up while charging, just turn off the engine. It is better to be safe than sorry about the burnt car. Yes, fill the car with a running motor is 99.9% safe. But the theory of probability is a complicated thing, and sometimes in our world happen very unlikely event. After all, the 0.01% is still not 0%.