As the dead began to be used along with mannequins in the US? 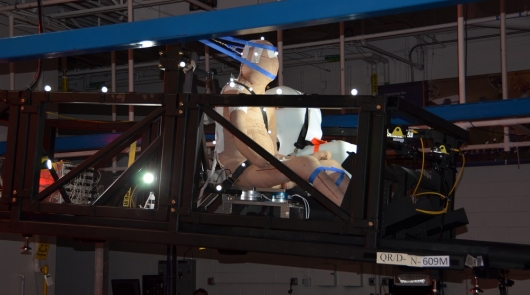 Glass shatters to pieces. Collapsible metal grinds on metal. A car accident is a nightmare that does not wish the enemy. Today, all authority in the world understand what kind of danger is road accidents, and why their number should reduce by all available means. In solidarity with them and the brands that are the best of their technical ability implement programs to reduce deaths on the roads.

But paradoxically it might sound, the country (USA) where the cult of cars settled a century ago, about safety on the roads seriously began to think not more than 50 years ago. At the same time, chilling details of the centres to study the impact of congestion and collisions, became known to a wide public only recently. Let’s delve into this crazy, creepy, but nevertheless the scientific world that makes people’s lives safe because… human corpses.

(Warning: this post is not for the faint of heart, it will contain images of dead bodies, wrapped in a special cloth to preserve the anonymity and respect for the departed in the world other people on whom doctors conducted their experiments to the living faced with the most serious accidents that could live on…)

At the state University of Michigan named Wayne (located in Detroit), is the empty building that once housed the faculty of engineering. It is here that one of the progenitors of modern automotive safety, Dr. Lawrence Patrick, first left cadaver in non-working Elevator shaft. It was a scientific experiment.

So, if you change your mind, go on a journey in the dark corners of automotive engineering about which you never heard.

“Safety is not for sale”

To understand how far stepped the safety of cars you should watch this visual, which became a classic example of a crash test in which a Chevrolet Malibu 2009 carries the nines Chevrolet Bel Air 1959 issue:

In the”Golden era” of the US auto industry (1950s – 60s years) car was, to put it mildly, not very safe. Plastic mannequin is rigidly clamped inside the cabin, while in Malibu, the hypothetical person was almost 100% chance not only to survive but even to minimal trauma.

The reader may object that the technology of half a century ago, not so in a forehead to compare it with modern analogs, we could not simulate the design as closely as possible to do now. In part, this is absolutely true argument, if not to take into account the fact that the safety of long time was not a priority for American manufacturers in particular and world in General autolite.

The automakers knew their cars kill people. In the postwar years in the American automotive industry even had a motto, which today sounds insanely cruel: “safety doesn’t sell”. At the state level, nor had there been the slightest attempt to improve the situation. There were no major laws that would regulate the rules of crash safety of vehicles. Although he struggled in droves.

In 1946 the death rate in car accidents in the United States first reached 30,000 people per year. In subsequent increased mortality on U.S. roads has increased every year, but never crossed that line back.

The first attempts to change the situation

Ford is one of the first to attempt to implement the rescue package “Lifeguard Design”. At that time it consisted of the most advanced systems of protection and innovative safety features 1956. “Lifeguard Design” introduced such innovations in the field of security, such as: soft-touch instrument panel, unbreakable rear view mirror and steering wheel with recessed steering column, that deforms instead of stringing the driver after an impact. Surprising was the fact that the common functions today in those days in the States was considered not quite adequate, literally in bayonets. 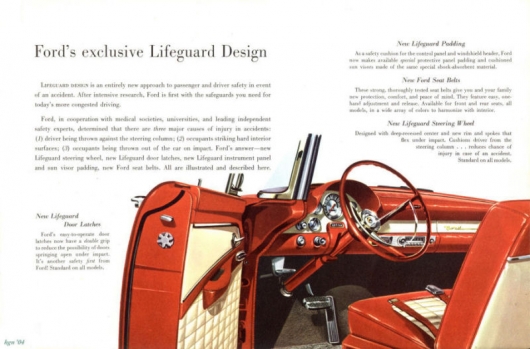 By 1963, mortality had risen to 40,000 people annually. Just two years later, Ralph Nader published “unsafe at any speed” (definitely worth a read a very interesting article from Wikipedia is particularly interesting methods of compromising the lawyer forces General Motors. One of the largest autocorporation did not shun all the available dirty methods to discredit this public figure. Oh, how ugly, how low, GM), which was aimed at the Chevrolet Corvair and safety standards in the automotive industry as a whole. As the water looked, just two years after that, in 1968, the mortality rate for perch USA crossed above 50,000 deaths per year. Began the struggle for life.

Where were you before?

So why was nothing done before? It’s simple – to spit on all wanted a safe car! Manufacturers and the car owners.

Example: in the case of the security package of the Ford, a good goal was soon exhausted. The buyers eventually moved to the very insecure, but beautiful Chevy, like Bel Air video which you happen to look at the beginning of the article. They were sold out like hot cakes, and innovative models Ford quickly forgotten. Henry Ford II in the hearts of even said about his own General Manager Robert McNamara: “McNamara is selling safety but Chevrolet sells cars.” 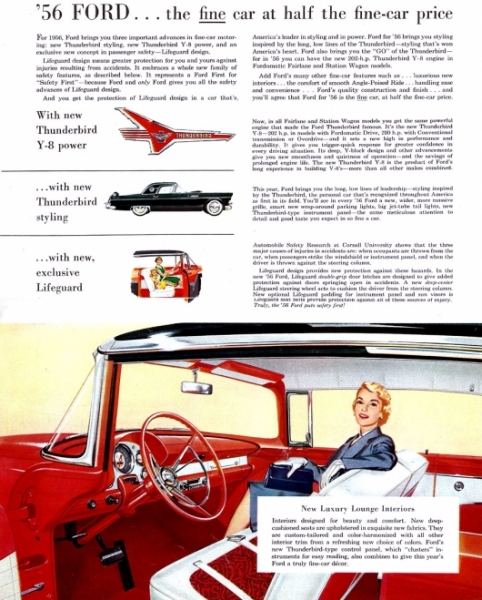 Meanwhile, in fact, by 1964, only from injuries provoked by the steering than 1.2 million drivers in the US. Like today’s desire for cleaner and more efficient vehicles, automakers know that there is a problem, but do not want to solve to solve, without the “whip”, which is included by the authorities. Legally, he was decorated in the late 60-ies.

Even the seatbelts were relatively new at the time. Ford installed them as options only on some of its cars since 1955, but the other brands didn’t hurry to follow this example, while Federal law does not required that all passenger cars were equipped with seat belts. The yard was in 1968. (The Swedes, by the way, imposed the same duty by the end of the 1950s.)

But if the car manufacturers were not interested in saving lives, some scientists were. And they went unusual and thorny paths toward the stars.

Dr. Lawrence Patrick was a Professor at the University of Michigan named Wayne, and, in a way, he became one of the first “test dummies” crash tests. Collecting data that can sustain the human body, Patrick was subjected to numerous impact tests, including a 10 pound metal pendulum on the chest and over 400 trips on the test sled, followed by rapid deceleration. Graduate students Patrick also suffered a variety of experiences in the name of security. In article 1965 Patrick described how his students volunteers went to the trials where they were beaten on the knees with the power to 4.450 Newtons. Brrr…

But to get really accurate data, they had to overcome not only the limits of human endurance (your limits), but to find the most plausible substitutes themselves. The bodies of the dead people.

“So help you God if you lived in the vicinity of Wayne State University in the mid 60-ies, and donated his body to science,” wrote Mary roach in her book Stiff: The Interesting Lives Of Human Cadavers. Patrick and his disciples first measured limits the impact forces on a human skull, dropping cadavers down an Elevator shaft at the now closed Shapero Hall, which is located in downtown Detroit.

Body was beaten, punched, hit and thrown on a special sled, and then carried out research into the damage. At the peak of the tests, which came in 1966 corpses were used once a month. The data they collected, were used in the scientific work of the “ Wayne State Tolerance Curve”, which is still used to calculate the force necessary to prevent head injuries in a car accident.

The data was also used to create some of the first reusable mannequins for crash tests, not because the use of bodies was unacceptable to scientists, but because to get “good body” for scientific purposes was a difficult task.

There was a gradation of selection of bodies. Here is how describes the process of selection of human material on a foreign website to highlight the research activities:

“Thanks to advances in medicine, most of the bodies donated to science were of older age and therefore more “fragile” than the bodies of young people. However, young people are likely to die in such a way that made them unusable to researchers.

According to the Center for control and prevention of diseases, injuries are the leading cause of death for people under 44 years of age, and fifth of these fatal injuries caused by motor vehicle accidents. Body, which has been in a car accident, as a rule, useless for the purposes of crash testing, which also means that the bodies used for testing, may not be re-used.

Researchers are also not allowed to test children body (thank God!) which are most at risk in car accidents. The bodies also need special training to have their stiff muscles are more like living tissue”.

Here such inhuman experiments were carried out in the past. But again, it is science and similar research is needed for the well-being of millions of living individuals.

What now? Medical bodies do not need to use?

Research using cadavers is gone, right? In theory, in the present we have data — only need to design mannequins to fit their specifications that reflect this data. Well, if you think that modern mannequins for crash tests perfect through the experiments in the past, think again. 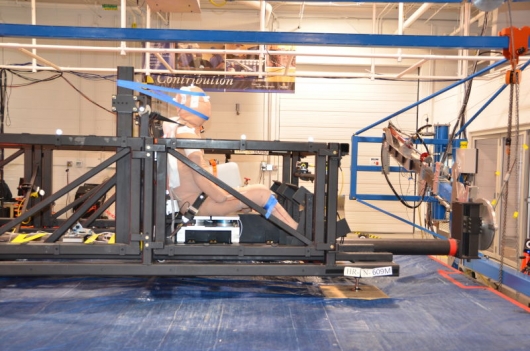 In our days a similar experiments are still carried out in the US, however for these purposes only a few cadavers annually. However, they still needed to improve the next generation of dummies for crash tests. Now much more effort in the industry is invested in the prevention of accidents and to protect passengers, although in this direction the work is carried out. But the need in human bodies is still occasionally occurs.

The population is also constantly changing. For example, today, Americans, on average, much heavier than in the 60’s. the Sensors on plastic mannequins also become more sensitive and accurate. New dummies also, you must promptly change it, using the latest population data to provide the most accurate information. 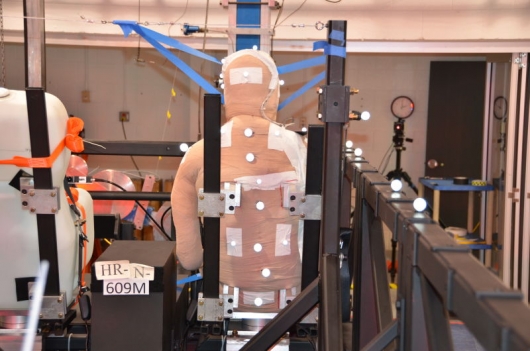 In 1995, in an article published in the journal “Trauma”, Professor of biomechanics, Dr. albert king has calculated that a study with cadavers has saved more than 8,000 lives a year since 1987.

So yeah, dead people have saved thousands of lives and continue to help save them today. It makes you wonder: do we do everything right in your life? Do we help someone, yet have the ability to help?

Protect yourself and your loved ones. Good luck not only on the road but also in life. It is one and priceless! I think you once again today, made sure of it.