In Russia was the cheapest German crossovers from Volkswagen: a Study

The cheap and expensive countries for car ownership: Russia is one of the cheapest 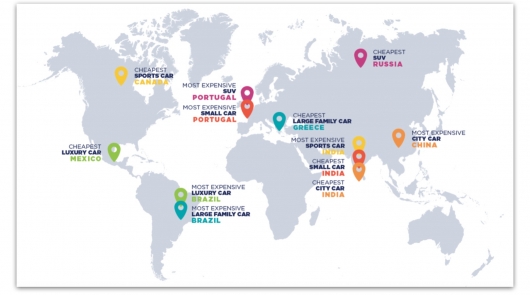 If you think that life in Russia motorists unbearable, look at this study and think again. For starters give you a few examples:

Around the world in car ownership, there are various restrictions, both direct and indirect. For example, in the United States objectively have a rule of import of old cars, so-called rule of “25-year import rule”, which requires the overcoming of the age of the car 25 years before it can be imported to the United States from other countries in case if version is not passed the Federal accreditation. Objective giant price tags on quite a common car in Singapore, here are some Ford Focus will cost $ five zeros.

Here’s what the study found: from the list of the countries studied, and a variety of vehicles, you’ll find that you can buy the cheapest sports car in Canada, the most inexpensive luxury car in Mexico, the cheapest small car in India and cheap in the world of SUVs in Russia. In the United States, the study showed, was not the most expensive and cheapest cars, all cars cost moderate cash and are generally cheaper than worldwide.

English insurance company “Compare The Market” examined the purchase price and cost to own cars of certain segments of the market in 24 different countries, finding out where cheaper and more expensive to own and live with them during the year.

Here are the cars that received a nomination in each segment, and where the company’s analysts considered the cheapest and most expensive:

Research done by a British company, so prices, naturally, were given in pounds sterling. In rubles, the cheapest and most expensive operating costs for the Fiat 500 has made 600 thousand roubles in India and 1.8 million rubles in China.

Among the compact class, this Volkswagen Golf with a minimum price tag of 608 thousand in India and slightly more than 2 million rubles in Portugal.

The Volkswagen Passat was available in Greece – 16.830 pounds (1.4 million rubles) and the most expensive in Brazil – 36.445 that the ruble is equivalent to 3 million rubles.

Another Volkswagen Tiguan, turned out to be the most accessible in Russia in the crossover segment – 17.182 pounds (1.4 million rubles), while in Portugal the same mid-size SUV is 2.7 million rubles.

The study also gave a breakdown of price ranges to own cars in the course of the year depending on the country, and the range included such things as purchase price, fuel, insurance and road tax. Here are the price tags set in different countries: 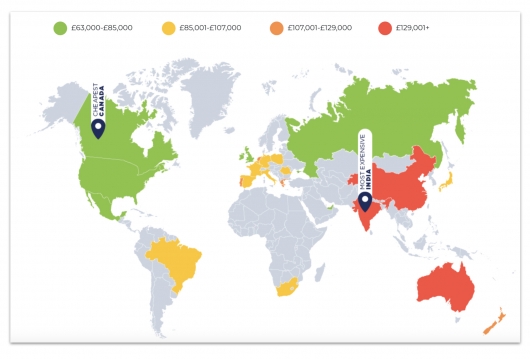 The study provides maps for all cars, as well as a breakdown of the recurrent expenditures in pounds for each of the studied countries. Quite an interesting study showing that automobile manufacturers sell the same cars at completely different prices in different countries.