In India, the child miraculously survived after being run over by a car

Miraculous rescue of the child on the road: Here the consequences of carelessness behind the wheel. 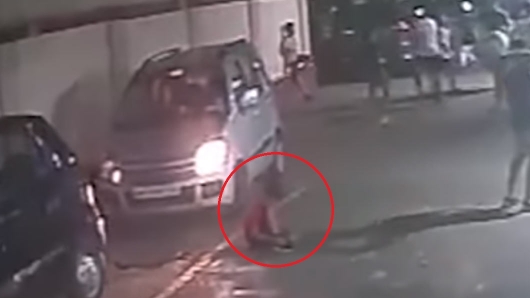 In India, a miracle happened – the teenager fell under the wheels of a car and being under it remained intact. It happened in the district Chembur in Mumbai.

Judging by the footage, it is evident that the children play football in the alley. Then the footage shows how one boy squatted down to apparently tie his Shoe. At this point in near a parked car sits the driver (presumably the girl).

Further there is incredible. The driver, without having convinced of safety of maneuver, and began to leave the Parking lot, ran over, sitting on his haunches seven children, who almost immediately came under the wheels.

It is noteworthy that the child doesn’t fall under one wheel of the car and could get out of this dangerous situation unharmed. Otherwise it was a miracle that this case can not be called. In the end the boy after the incident, gets up and runs to his friends.

So unbelievable but true, the child escaped with apparently a black eye and a few scratches. Most interesting is that the girl that was sitting behind the wheel and drove off, not seeing the child, and left in the dark.

This video, by the way, in social networks, India has become viral. The only thing not clear is whether the proceedings by the Indian authorities after the incident.