Hybrid UAZ “Pro”, the first unique domestic development is not worse than the Toyota Prius 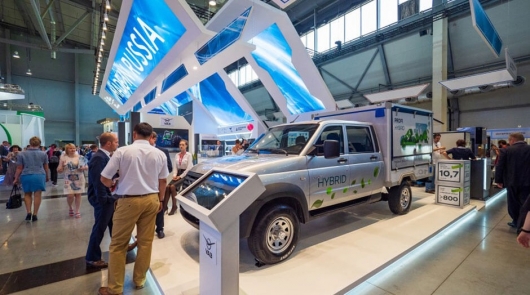 Photos taken from the site www.uaz.ru

In the city of Yekaterinburg UAZ presented a rather interesting concept. A prototype of the SUV is difficult to name familiar to our automotive industry, because the driving part is completely custom, it’s not a gasoline powertrain and even a diesel motor under the hood located environmentally friendly hybrid engine. And Yes, before you first Russian commercial truck with a hybrid engine.

Ulyanovsk together with the engineers of FSUE “NAMI” has designed and created a prototype of Russia’s first domestic commercial van low tonnage UAZ platform model “Profi”. “The exhibition shows a version with two-row five-seat cabin and superstructure functional van carrying up to 1.5 tonnes,” reads the official website of UAZ. Of the features unique model emphasizes reduced fuel consumption, environmental friendliness, and increased dynamic performance and higher compared to the previously presented versions of “Pro” torque. The van is already superior in terms of environmental standards Euro-6 which makes it competitive in the future. 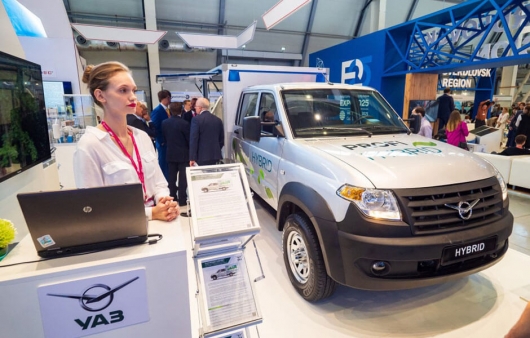 In other words, the photos are domestic development, the Russian hybrid unit, which in the future is likely to become a serial model. At least on the manufacturer’s website from Ulyanovsk look to the future with hope: “Serial production of the car is scheduled to begin after all the necessary tests.”

The hybrid setup provides three driving modes depending on the task and operating conditions. Electric, diesel and mixed modes. To the components of the propulsion elements include: atmospheric gasoline internal combustion engine capacity of 2.3 liter capacity 131 HP torque is 214 Nm.

A six-speed automatic transmission (Yes, the prototype is “automatic”) is equipped with a motor with a capacity of 126 HP and a torque of 288 Nm. The electric motor feeds the battery voltage 365 by 14 kWh. Complement the electrical diagram of the auxiliary device for transformation and distribution of electricity. They also work to replenish the battery charge from the mains. Fuel consumption in mixed mode is 7.6 liters per 100 km, that lorry is quite an impressive result. The only thing that remains unclear is consumption without load or with itself. 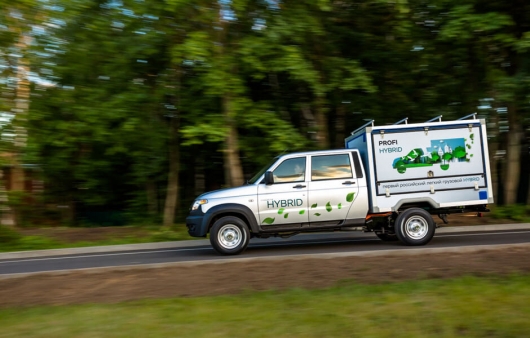 UAZ “Pro” in mixed mode and the petrol engine has a total cruising range on one filling — up to 855 km When driving only on electricity car can travel up to 74 km. “Thanks to the hybrid powertrain, the new car gets a good momentum booster, including in the loaded form,” emphasize the positive traits of the developers of the model. Acceleration to 100 km corresponds to 10.7 seconds, which is more than three times (!) increases the dynamics as compared to the current serial mode of the internal combustion engine.

An interesting scheme of hybrid power plant. In hybrid mode, the internal combustion engine works in parallel with the electric motor mounted in the automatic transmission (scheme extended to foreign analogues). The mode is activated after reaching a vehicle speed of 50 km/h when the electronic system automatically switches the engine to ensure collaboration hybrid powertrain. 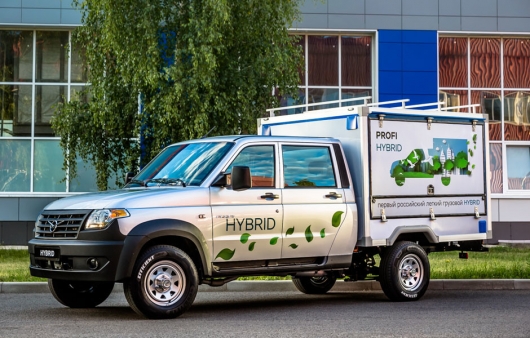 The future of electric transport in Russia is still there? I hope so!