How you can reduce fuel consumption by 12% by using inlet manifold: Board of Porsche

Why does Porsche inlet manifold is not like the other brands 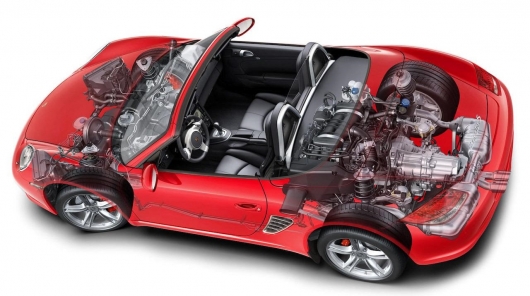 For many of us, even those who are really obsessed with such topics for discussion as the form of the intake and exhaust manifolds too boring and almost always interesting. Most of us frankly do not care about the angle of curvature of this manifold, its length and other engineering abstruse things. Most of us just want to enjoy my car or at least have to operate reliable machine that will not break and cause inconvenience, which in itself is a pleasure.

Alas, very sorry that we do not pay enough attention to non-obvious but important things. In the car, no unnecessary details, but the importance of some of them so it’s hard to overstate just wonder why in honor of this, details have not put the monument in the square courtyard of any automobile. One of these vehicle components is the intake manifold.

We have a tendency to relate to intake manifolds as regular pipes, in which air enters or in which there is a mixture of the fuel / air mixture before feeding it into the combustion chamber. Some of us even know that it has also attached certain elements of the fuel supply system, such as: injectors, carburetor, throttle flap, etc. In General, nothing complicated, obscure and unexplored. But actually all not so is simple, and to some extent very interesting. This will help to understand from video engineer YouTube channel “Engineering Explained”, Jason Fenske, which talks about some of the secret technologies used by Porsche to improve the performance of their engines with the help of collectors (the video has Russian subtitles, activate them in “Settings”):

If you have not mastered the video, briefly denoted as an engineer explains on the example of the conventional intake manifolds advantages of the developed collectors from Porsche. You will also learn how these intake manifolds are designed to increase pressure in the area of the intake valve and what does it do. 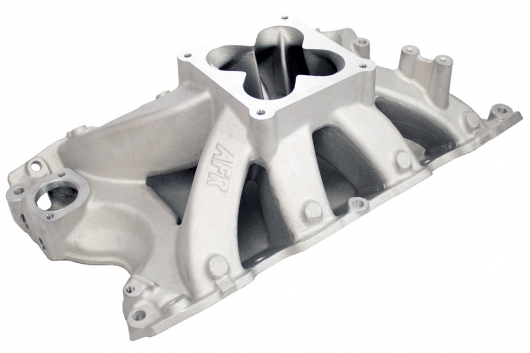 And so, during the intake stroke, the intake valve opens, delivering the air into the cylinder. As soon as the stroke is completed and the valve closed in front of him, in the intake manifold is a region of high pressure. This effect is achieved specifically by engineers when designing the intake manifold. When you reopen the valve, due to the increased pressure in his area, the cylinder will receive more air, and thus can be injected into the cylinder and more fuel, increasing the power even without the turbocharger, based solely on design features of the collector and he created the effect.

It is noted that high blood pressure is intermittent, and the highest figures correspond to specific engine speed and, of course, the length of the diverging cylinders of the tube, the level of processing of their inner surface and the material from which they are made, which directly affects the nature of the turbulence inside the manifold during intake.

Interesting, isn’t it? But the Porsche company received more cunning. 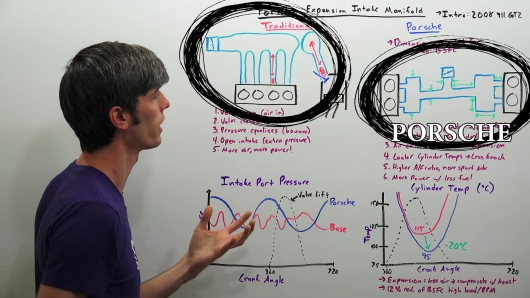 Porsche has essentially done the opposite thing: by changing all the parameters of the length and width of the pipes on the intake manifold its boxer engine from the original, 10 years ago, in 2008 (911 GT2), the German engineers added a region extension on the intake to…, conversely, to lower the pressure in the manifold before the air / fuel mixture gets into the cylinder, which seems paradoxical, because the mirror reflects all the previous achievements of automotive companies over the past nearly 100 years!

The result is seemingly counterintuitive approach of Porsche, is that their four – and six-cylinder turbocharged boxer engines, intake air gets much cooler, reducing detonation and allowing you to reduce fuel consumption by 12%, while generating the same amount of horsepower, compared to the conventional intake manifold. How do you mean: detonation below, plus a decrease of 12% in fuel consumption without reducing power. And all this thanks to only one intake manifold clever! 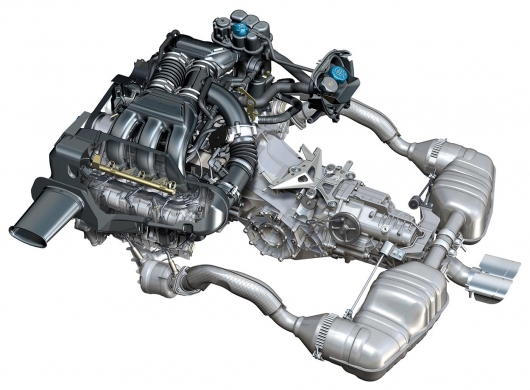 That’s really clever and it’s amazing how many settings of the engine can be carried out solely by changing the size and shape of the pipes.