How to work the points against sickness developed by Citroen?

Technology against sickness, which quickened the Citroen is whether travelers?

Hardly you will find at least one person who would be like motion sickness in transport. This unpleasant phenomenon do not like and avoid people of all ages, regardless of place of residence. But it pursues us, unfortunately, absolutely everywhere. Do not have to be a sailor to feel all the “charms” of pitching, any moving vehicle can lead to unpleasant consequences: in the car, train and even plane. According to statistics, 15% of the population susceptible to “motion sickness” or as it is called by scientists – kinetsu.

Some are subject to the phenomenon of motion sickness to a greater degree, others less. Over time, the negative effect people have dulled, but completely not going anywhere. For the first time since this painful occurrence people faced thousands of years ago, when the first swimming facilities. Boats, boats, small ships mercilessly rocked on the waves. These repetitive oscillations led to disorientation of the vestibular apparatus located in the inner ear.

Another clarified the reason for the conflict between entering the CNS (Central nervous system) signals from the vestibular apparatus and organs of vision of the sufferer. The fact is that our body at such moments did not understand what was happening to him – the feeling of motion is (felt the vibrations of a moving vehicle) but the visibility that we are moving – no. For example, if while driving the car “climb” in a smartphone, the likelihood of seasickness increases. Because the field of view won’t be moving and will not be visible to the horizon, and only fixed the phone screen and the interior elements of the machine. People through the vestibular system will sense the motion, the repetitive motion, but the eyes to see this will not.

This discrepancy will lead to confusion Central nervous system, there will be dissonance, and after a while the poor fellow will be asked to stop the car, train or even plane, just to get rid of painful sensations.

Ways of struggle with “motion sickness” invented a lot, from folk remedies like warm tea, to tablets motion sickness that you should drink before driving. Sea wolves know that, if you look at a known fixed objects such as the horizon line, you can trick your body and bring it back to normal. But the most interesting remedy for nausea, were the special glasses that were invented about a century ago.

Now an invention that was first made for sailors in France, actively promoted the automaker Citroen. This device is called “Seetroen” has no lenses and diopters. The meaning of his work is not to focus the vision, and to give the nervous system the necessary information.

In ten minutes, but in the points in which you will look like the Minions of “Despicable me”, will completely eliminate the unpleasant symptoms.

As the work points against the sickness? 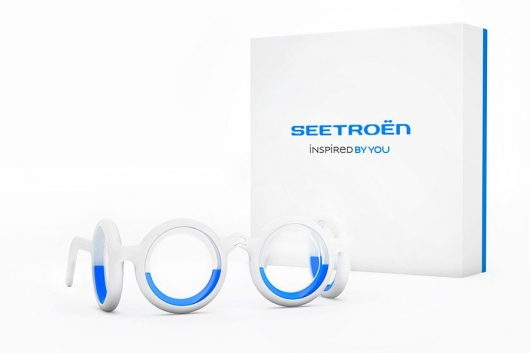 At first glance it looks like some kind of magic. All that is present in the glasses is a round frame with transparent glass or plastic rings, as you can see rings of four. Side two is designed to help peripheral vision. Inside of these rings to half bathed in blue liquid, which when moving freely splashing left and right, forward and back. It is a “magic”, since the liquid simulates the horizon that allows the visual receptors to combine through the nervous system sensation that corresponds to the reproducible inner ear. The sickness will go away after 10 -12 minutes, after which points can be removed and enjoy the ride.

In the promotional clip Citroen says that 95 percent of travelers this should be an effective method of dealing with kinetosome. The remaining 5% will have, as before, to resort to drugs motion sickness. 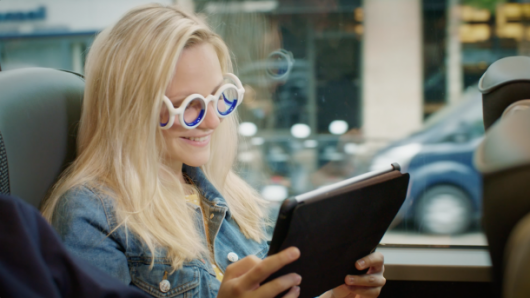 Citroën will sell their glasses “Seetroën” through your online store lifestyle for $ 115 (7.100 rubles). Good price, 100 ago, isn’t it? This renovation of the old technology once again shows that all new is well forgotten old. History need to know, it is possible to earn a lot of money!