How not to buy a car loan in pledge: Explanation of the Supreme court 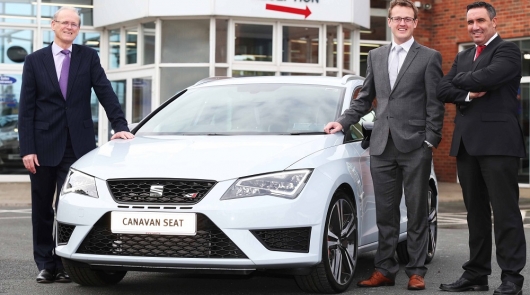 Credit car – a fine thing, which side is it does not come. To take Bank funds personal property is risky, without a rational approach, expert is very easy to get burned. Unfortunately, many scammers and dishonest car owners know that a large number of those motorists who will not (or can not, even if you want) to check the car on his credit history. In other words, will not go into the details, there is a car in the mortgage or not. But this is a very important point, no one do not want to answer other people’s obligations. But alas, practice shows the reverse – trap still gets a considerable number of people.

The amount defrauded in the previous years, car owners was so great that the Federal Notary chamber of the Russian Federation had to make a website for checking, credit property, the so-called “Register of pledges”. A very useful and important, though not giving an absolute guarantee that the car owner will be protected against fraud. But more on that later in the practical part. Now we want to tell you the case studies. It will be helpful for the overall development of those who decided to buy a used car, but do not know all the possible pitfalls.

Details of the administrative proceeding can be read by clicking on the link above, here only describe the case briefly.

In one of the Russian banks was a loan to purchase a car. According to the standard scheme the Bank to ensure the loan is issued the movable collateral (typically in the banking organization passes the original PTS* (passport of the vehicle), spare set of keys and the original of the insurance policy CASCO).

*Title ceded to the Bank for storage – touch is extremely important, because without it is impossible to do with movable property of any actions, except control.

But as it turned out later, the owner in a short period of time after the acquisition loan of the car was able to sell it! December 17, 2015, the owner sold the mortgaged car to another citizen, without notifying the mortgagee. In connection with the loss of the collateral, the Bank sent the borrower a request for the early repayment of the loan, which left the latter without satisfaction.

These circumstances (the loss of the Bank collateral on the loan and no credit refund) served as the basis for the appeal the Bank to court to claim the return of the collateral. And, as you might imagine, have fallen mortgage car being already in the hands of another bona fide purchaser would have been at court again to move to the Bank.

For all the assurances of the second buyer that all documents, including the passport of the vehicle, was the seller on his hands (although PTS were supposed to be deposited in Bank) and there were no problems with the car statement on the account in traffic police and was not imposed any restrictions on the registration of the car, and that means making sure the purity of the deal, he did not know and could not know about the fraud, the Bank did not react, not withdrawing the complaint from the second buyer. He then filed a counterclaim against the Bank.

Then quoting a clipping from the definition of VS:

“The decision of the Ust-Labinsk district court of Krasnodar territory from July 6, 2017 the Bank’s claim is satisfied, to the satisfaction of the counterclaim Harlamenko D. N. denied.

The appeal determination of judicial Board on civil cases of the Krasnodar regional court from October 5, 2017 the decision of the trial court in part satisfaction of the requirements of the Bank to foreclose on the mortgaged property canceled, canceled part received the new decision on refusal in satisfaction of this requirement. The rest of the court of first instance upheld”.

But the Supreme court disagreed with the appeal decision, and here’s why:

1. The subject of the pledge is alienated in the absence of the consent of the mortgagee

2. And the buyer, pursuant to article 339.1 of the Civil code of the Russian Federation, can check information about finding the purchased car as collateral, available for free access on the official website of the Federal notary chamber. He could, however, this opportunity was not used.

3. In case of alienation of the pledged property, the pledgee may demand early performance of the secured obligations or, if his requirement is not satisfied, to foreclose on the collateral.

The fact the sun has returned for a new trial in the appellate court that the new owner does not smell nothing good, because the car he will withdraw, despite all the efforts, he thought, precautions. Chief because he did not have the car checked at a Deposit through the available service in the Internet. 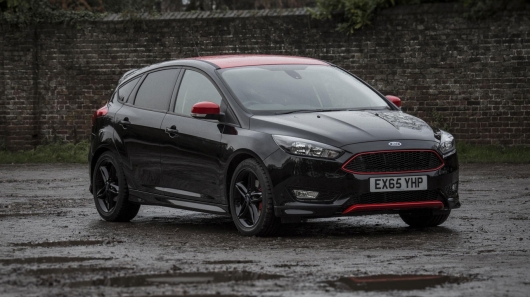 Better yet, in such an important matter as the purchase of expensive real estate, the buyer would need to apply to the notary, he as a professional will hold all checks for you. Even if there is no doubt about the purity of the transaction, the acquirer is better to be safe and pay a little more, never to return to the issue of buying in so very unpleasant situations.

Electronic services are not insured from failures, so if the buyer really couldn’t know about the car as collateral (a failure has occurred and the record of this appeared on the website reestr-zalogov.ru), then the bona fide purchaser is released from the pledge under Article 352. The termination of the pledge

1. The pledge shall be terminated:

2) if the mortgaged property is onerously acquired by a person who neither knew nor should have known that the property is a pledge subject.

However, if you are confident in your abilities, will give you a brief practical instructions for checking the car.

How to find out if the vehicle is in the pledge?

As you know, 2014 started “the Registry of notifications about pledge of movable property”, with a database of credit car, which leads the Federal Notary chamber of the Russian Federation.

Thus, if the vehicle was bought on credit, but the owner stopped paying the money credit institution information about it for more than 4 years goes to the official website of the Notary chamber of the Russian Federation, on which you can learn and in case of problems, to cancel the transaction for purchase and sale.

To visit the official website of the collateral registry, you must pass at: https://www.reestr-zalogov.ru/state/index#/

Next, you need to choose on the top tab “Find in registry”. 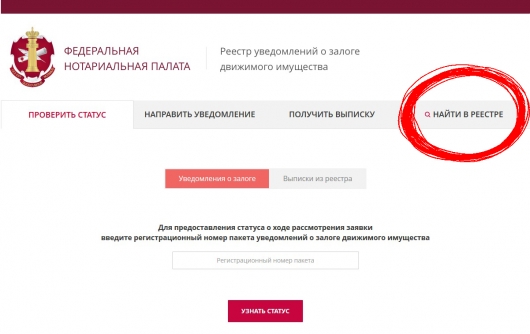 In order to find out if the car as collateral, go to the tab “information on collateral” is the “Vehicle” and enter the 11-or 17-digit identification number VIN. 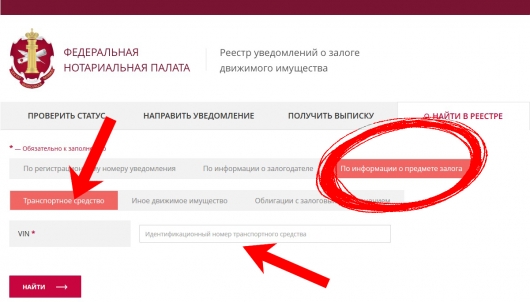 If the database of the notary chamber contains information about the mortgaged vehicle, You will get full data on the subject of bail, namely:

Number of registry date of registration of the pledge in the registry, what property, information about the pledger and the pledgee.

Also in the register of pledges has a search according to the pledgor. To determine the list of collateral the particular mortgagor must, in the online register of pledges click “Information of pledgers”. Next, you need to choose the legal status of the depositor (natural person, legal person), enter the information about the pledger and press the “Find”button. 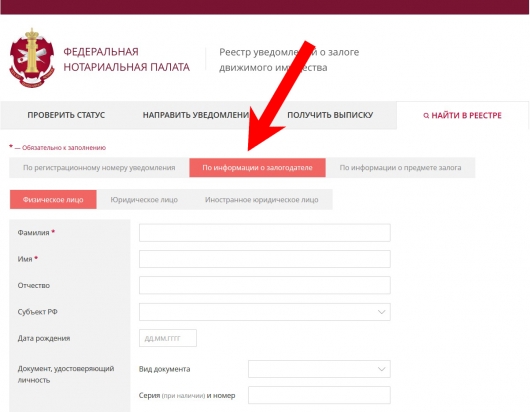