Rust can appear on any car: the Causes, consequences, and control options 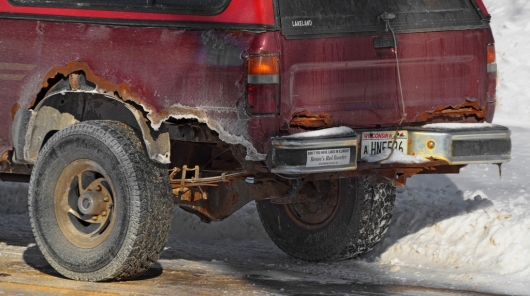 An ominous brown stain on the fender, a bubble in the paint at the bottom of the door, suddenly, soaked floor mats in the car after driving through large puddles. All of these are clear signs that your car began to undermine this slow killer as “rust”.

Rust. Many underestimate her. Many do not know that this is frivolous at first glance, the trouble regularly sends to the dump tens of thousands of cars. But the problem is preventable and it is possible and necessary to fight!

With metals based on iron to combat oxidation can be a Sisyphean labor, because even in spite of the advanced coatings and alloys developed by professional chemists and engineers, the unstable chemical composition of the steel in its original form means that it will always be subject to corrosion in the natural environment. However, this does not mean that your machine is doomed. Understanding the oxidation process of the metal and knowing the problem areas on the bodywork of your car, you can extend the life of your car.

Can I avoid rust? “Rust” is the term the layman for the electrochemical destruction of metals based on iron is called oxidation. In this process the molecules on the surface react with oxygen and produce a new molecule of Fe2O3, also known as iron oxide. Iron and most steels, sooner or later will completely disintegrate into iron oxide and constituent elements, give them enough time.

Examples of the use of automotive steels of different quality can cause a lot. It is not only hackneyed motorists 90-ies “the Zhiguli” and “Muscovites”, which seems to be more rusted on the Assembly line. Similar problems were at the US automakers in the 70’s, when the rust began to spread on cars that have not yet managed to go beyond the gates of the dealership. Or problems with the paintwork and the metal on most modern models. For Example, Hyundai Creta. Remember? (Top 5 of the most horrifying facts about Hyundai Creta)

At the same time, untreated, raw sheet steel can be very long to resist corrosion, not full of parts in over several years.

Hence we can make the first conclusion: If you buy a car (even if it is a new model and the car taken from inside), be sure to go through the forums and look for rust if the vehicles of a particular year of issue. Otherwise, you may not of the story, and you will be taken to any party of machinery in which, for some unknown reason has been applied to the steel of poor quality. As you know, these cars will rot. Such cases are rare, but do happen. So beware.

Here you are the owner or have owned a car. If you purchased a new car and expect to use it for a long period of time, ranging from five years and above, congratulations, you have a chance to see all the stages of development of the destruction of the body.

Consider the three main types of rust, and then discuss how it can be avoided or “cured”. 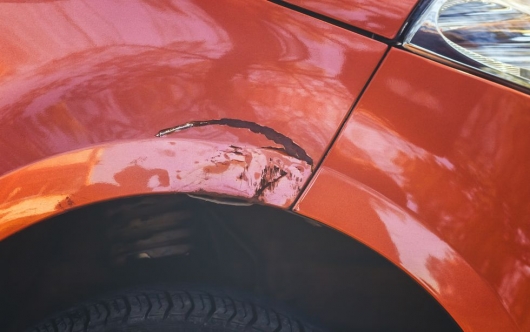 The first signs of problems appear in cracks and scratches on the paint. Level of difficulty: Easy to fix.

Rust are the targets of structural and chemical impurities in metal alloys at the microscopic and molecular levels. Pure iron doesn’t oxidize as aggressively as cheaper material with a large amount of impurities. It is easy to understand if you look at old items from the premium German cars of the 70s, 80s years. Even unpainted elements, being in the open air, under rain and snow, although with time and covered with rust, but the penetration of oxidation is not so deep as in the case of cars of the 90s and the zero years of the XXI century.

The thing is, as you know, in expensive models of prestigious brands used better quality alloys that helped to put the most wear resistance in all parts of the car, including the body.

Unfortunately, iron is not a particularly good material to build cars. The addition of small quantities of carbon to iron creates steel, which offers significant improvements in flexibility, tensile strength and formability during pressing of the panels. But by definition this adds impurities—impurities that accelerate the rusting process. 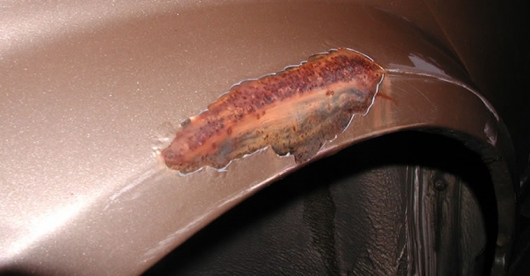 The spread of rust into steel depends on many different factors:

alloy, thickness, environment (snow, reagents, accelerating the process of decomposition, changes in temperature) and the type of heat treatment details.

Alloying elements such as Nickel and chromium, can be added to help prevent rust, but nothing can 100% protect detail — everything eventually corrodes.

The reagent is generally a separate topic. The effect of rusting is accelerated by the presence of any kind of salt. Road salt and other contaminants dissolved in water act as electrolytes. Getting on an insecure place where a chemical reaction takes place, they greatly speed up the exchange of molecular components.

In practice, we can say the following: a dirty car rust faster pure. This also explains the long note, cars in countries with a Northern climate where salt and reagents used in winter, are prone to decay. 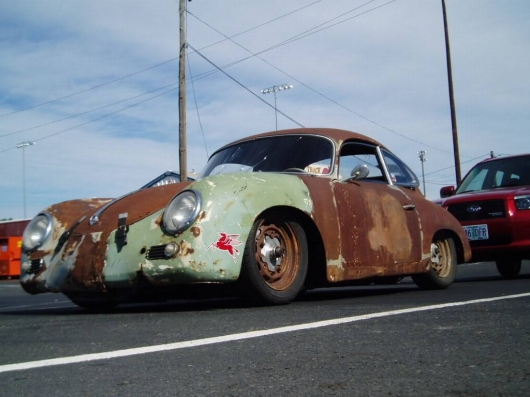 After prolonged exposure to the oxidation process, the steel is converted to brittle iron oxide. Are formed through holes.

Automakers do a lot to try to prevent corrosion. A huge number of tests and entire sections of materials science devoted to the preservation of your vehicle. Components from aluminum and magnesium are very helpful in the fight against rust. They are practically not subject to oxidation, and their margin of safety will last for decades to come. However, these metals are quite expensive, so they can be used for such large parts as body. To reduce costs

Modern sheet steel at the stage of production in a steel mill comes with a variety of protective coatings. At the automobile plant, the added additional protective coatings, including galvanized and thick layer of surface protection of the car underbody which literally seals the body from exposure to the elements oxygen and destructive of the environment.

Alas, with time, any marked on the metal protection is erased, thinner and in some places completely out. The metal laid bare, the process of destruction.

Tip: a Few do, but it is important at least once a year, after winter, inspect, clean (ideally you need to wash and base) car for damage of the protective layer. If found a chip or a deep scratch down the metal required to neutralize the damage, stopping the access of air to the damaged part of the surface.

Depending on the depth and location of the damage, for these purposes it is possible to use primer, followed by paint application (for little damage), rust Converter, sealing of the hearth of oxygen, application of anticorrosive on the bottom, if the protective layer at the bottom was damaged in several places. When the average exploitation of its damage occurs after three years.

The vigilance and care of the car, that’s the key to long-term work of the body. 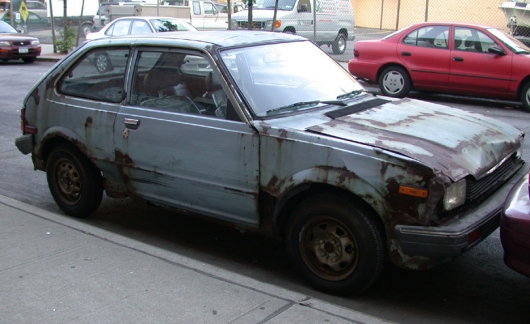 The best advice is the most obvious: wash your car regularly to clean the body and the bottom (at least once a year after winter) from dirt and salts that cause corrosion. Not so obvious tip is to check the drainage holes at the bottom of the doors and rocker panels. If there’s stagnate water – this will lead to the inevitable rust.

But if the rust is still there, it’s not such a great problem. The fact that rusting can be stopped at any stage. 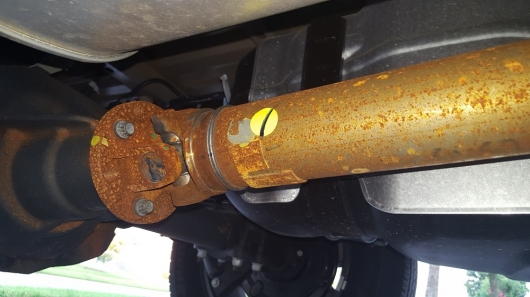 In most cases, surface rust is formed in place of the scrapped paint from mechanical or UV damage. The first stage of rusting will not bring big problems to the bodywork of your car. Depending on the metal thickness and the quality of the alloy before the third stage may take more than one year.

Despite this, it is best to get rid of the surface rust as soon as you’ll find it. The hotfix is not different from the General repair of the paint. How to fix scratches and other damages, we wrote a lot.

Start by using the abrasive wheel or abrasive paper to go the paint layer and clean off the corrosion until, until you see the metal. Then apply primer, then paint, then paint. Ready! Read more here: How to paint your car: a Detailed guide to action 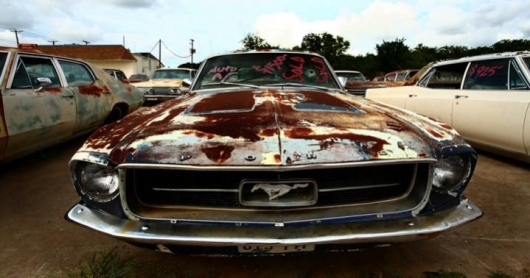 You cleaned the rust in the first stage, and now on the body emblazoned rusty bubble under the paint. Rust molecules are physically larger than the molecules of iron or steel. As a result, rust is self-distributed by the extension affecting and destroying the fresh metal. If it is not completely removed, the rot will not stop.

If repair parts need to use a rust Converter and brush with hard metal bristles, and the sandpaper or abrasive disk. We clean the hearth to smooth surface, then apply a primer and paint. 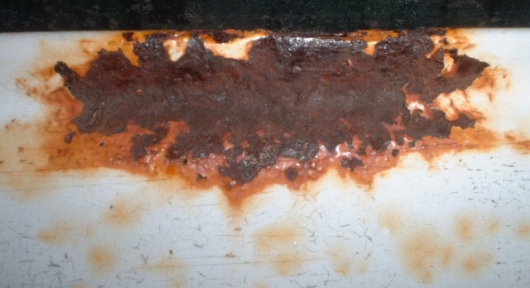 In the end, the base metal is peeling off and in its place formed a hole. Now you have a big problem, and you have two options. You can replace the panel (if possible) or have to cut out the rotten part and weld it to ask of a patch of the normal metal.

But if the rusted frame, which means that the structural integrity of the car may be broken. The frame can’t fix. Or to change on new or to ask for advice to professionals.