App for smartphone and tablet that detects the manipulation of the odometer. 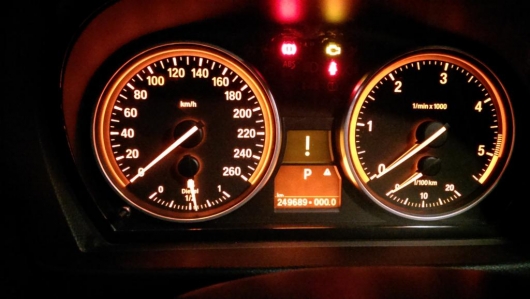 The problem of the twisting of the mileage of used cars are known worldwide. And despite the fact that in some developed Western countries for twisting the mileage is, criminal liability, it does not stop users from making adjustments runs. In our country, the twisting run in General there is no liability. Can you imagine how much in Russia of cars sold after the adjustment of the odometer.

In the old machines, we recall, was used mostly analog mechanical mileage that, in order to adjust, you had to really twist with the help of a special mechanism in the opposite direction. In modern machines it is much simpler. Mileage, as a rule, adjusted with the help of specially connected to the computer of the vehicle equipment. Connecting via the OBD II connector special cable going to the computer or tablet that has a special program, the malefactors get access to the computer memory of the vehicle, where the value of the mileage of the car.

Having access to this section of memory, you can erase the old figure of the mileage and set the value you want. In principle, it is the whole process of twisting of the mileage, the most widely used among many car owners and car bought.

In the end, according to many studies, in the world at the moment, one third of used cars in the secondary market are sold with twisted mileage.

So when you buy in the market for a used car, be extremely careful not to buy a car with huge mileage, which was twisted. Moreover, mileage can be twisted even more than once. For example, several times the mileage they could wring a few owners of the car.

We know that there are many ways to determine if the correct mileage of the car appearance. It is no secret that if the mileage of the car is large, by external signs, the car must also display a high mileage. But, alas, there is no absolute protection against such manipulation of the odometer because some sly sellers not only twist the mileage of the car, but also conduct thorough pre-training to give the car an appearance that would fit mileage, installed after adjustment. 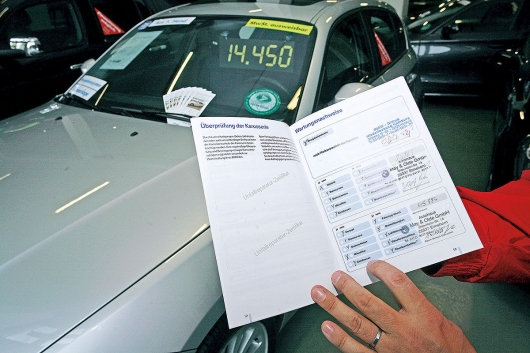 For example, if the car had high mileage, it is likely that it will also show the status of the clutch, brake and gas. Also needs to be nipped in the steering wheel and gear lever. Including the more mileage the car has, the more chips on the hood, grille and front bumper. In addition, on vehicles with high mileage the headlights become cloudy. But all these signs can be easily cleaned with pre-sale preparation of cars. In the end, to know twisted if the mileage of the car, not so easy for an ordinary person. 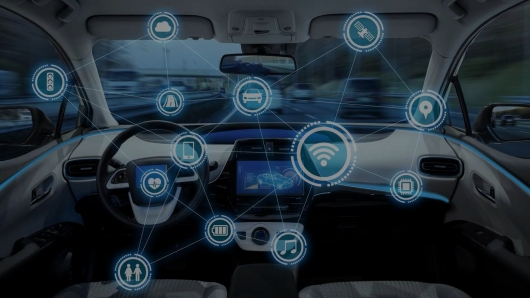 In most cases it fails, because the full adjustment path is very expensive.

But really only a professional can help to find in the computer’s memory the remaining values of the original mileage? Yes, without a professional you could not do without. Today, in the age of high technology and smartphonesfree everything became much easier.

Recently, for such cases, there is an interesting application that is reading data from the car’s computer verifies all of the memory cells (many of which can not be corrected by a simple change of data via computer and tablet, as these data come from a variety of machine equipment: airbag, transmission, gearboxes, etc.).

As a result of scanning all the memory cells in each electronic equipment electronic application compares the obtained data with mileage on the odometer, identifying all discovered discrepancies.

This application is called Carly. But that’s not all. Also this software when you connect your computer, smartphone or tablet to the machine compares the average speed of the odometer, comparing the received data with the hours (time worked as the engine is considered the engine control unit and is written in a memory cell).

As a result, if obtained for comparison data differ, it means that the mileage of the car was twisted. 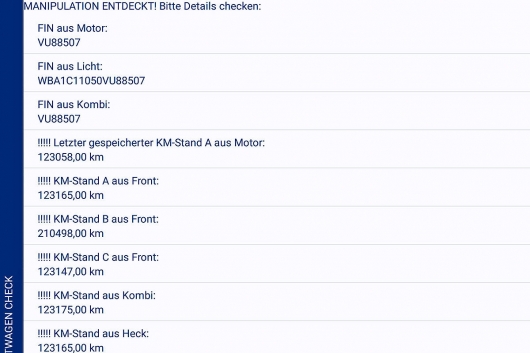 How to check car mileage with the app, Carly? 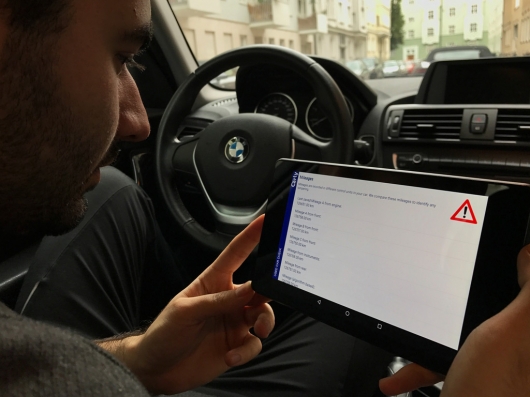 The test car with the app, Carly takes only half a minute. So you may have until the transaction of sale of the car is easy to independently check the honesty of the odometer. Here’s how it works:

Step 1: the Bluetooth Adapter, which is sold together with the app Carly, connects to the OBD II connector of your vehicle. This connector for most cars is in the steering column or below the dashboard. In some vehicles, the diagnostic connector is in the glove box or under it. In some cars the access to connect to the engine control unit located in the engine compartment. If you don’t know where your car is OBD II connector, read the manual.

Step 2: Program Carly wirelessly connects to the Bluetooth adapter that you have installed the OBD II connector. In just a few clicks on your smartphone or tablet, you can run a function to check the mileage of a used car.

Step 4: If the mileage of the car has been previously adjusted in a simple way, Annex Carly will warn you about it, showing on the screen the exclamation mark.

How precisely the application determines the falsification of mileage? 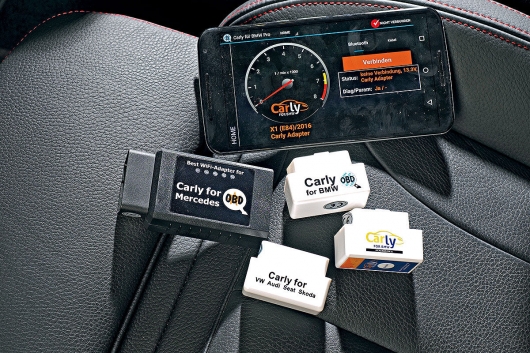 Even your smartphone can become a serious diagnostic equipment to test vehicle not only for fault, but to verify that the twisting of the mileage.

It depends on how professionally were adjusted the mileage on the odometer of the car. If you have made a costly manipulation, in which had been replaced by many units of the car, keeping the original mileage, of course, such an application is not able to detect the falsification of mileage. But do not worry, this adjustment path is very rare as very expensive, because to cover it up with the original mileage, the car needs to change a lot of expensive electronic components.

What else can the app do? 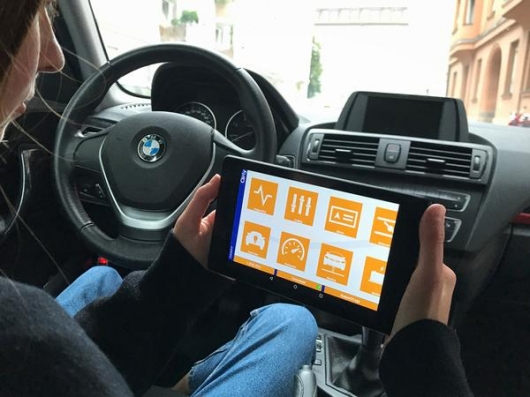 App Carly is not a special program just to check the mileage of the car. In fact, the check function adjustment of the mileage is implemented as part of a diagnostic application with which you can diagnose the vehicle faults. Including using the application you can see various engine parameters (including temperature and pressure).

What cars can be checked with the app, Carly? 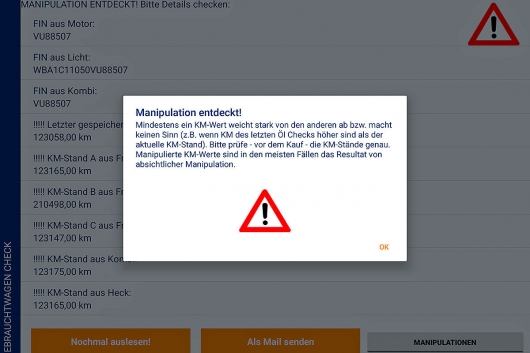 If the application is found not actual miles on the odometer the mileage recorded in the various electronic components, you will see a warning exclamation mark.

But the function of checking the veracity of the mileage is currently only available for BMW cars (also Mini), VW, Audi, Skoda, Seat and Mercedes.

How much is the app Carly with the adapter?

The average cost of an original Bluetooth adapter and a program Carly in Germany is an average of 45-50 euros. You can order the adapter in Germany. You can also buy it in our market. However, please note that our market is very much Chinese junk, among which are sold, usually, non-original adapters. Attention! With these Chinese adapters program Carly may not work correctly.

Why is it so difficult to wring mileage completely? 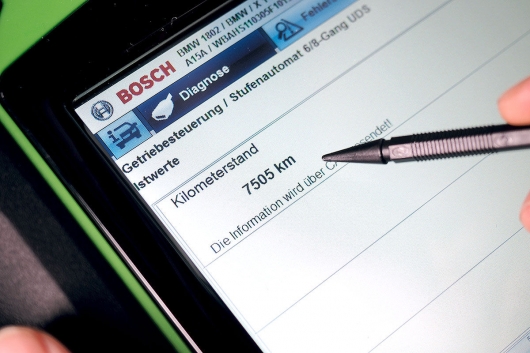 In modern cars there is a lot of small computers that control various equipment. For example, a separate electronic unit has a transmission and even climate control. In these blocks in many modern cars are written of the original mileage.

In most cases, to wring mileage, many are turning to specialists, who usually only adjust the odometer. As a result, data on the actual mileage stored in many other machine units.

Download apps for smartphones and tablets running on the Android system, you can | then |