Here’s how the traffic police is wrong klassificeret traffic violations 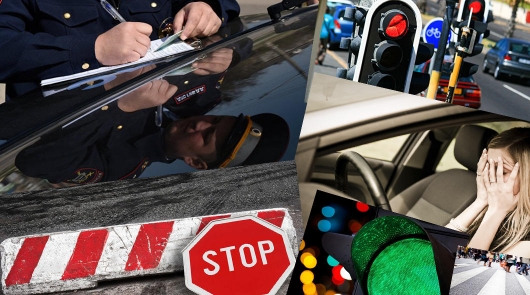 Who among us has not violated traffic regulations? Probably, there are drivers who at least once did not receive a penalty for failure to comply with the Rules of the road.

Also most of the owners had experience with the police and get a Protocol on administrative violation and a receipt for payment of the fine.

Yes it happens to everyone. Each of us can make mistakes and violate traffic rules. Especially in difficult places where even experienced drivers get lost easily. In such places love to be a DPS for which such traps are the main source of additional earnings.

It would seem that everything is simple. Well, we broke the traffic rules, then blame and are willing to pay the fine. But, alas, the last time in our online edition has started to receive complaints from drivers who reported that from time to time meet on the road with the traffic cops who either through ignorance or specifically in drawing up the Protocol record, it is not the violation referred to in the code, which ultimately threatens the driver to more severe punishment.

That is, in fact, some clever police officers are wrong klassificeret violation drivers. Often such errors (or deliberate intimidation of drivers) threaten motorists not only larger fines, but even a deprivation of rights.

Why is this happening? Yes, the fact is that many traffic violations can, if desired, can easily be reclassified from one article to another or from one paragraph to another. After all, most violations of the law all left at the mercy of the DPS. That is only the employee of traffic police makes the final decision on which article and part bring the driver to administrative responsibility. Of course, such discretion does not contribute to reducing corruption on the road. Yes, of course, every driver today, if you do not agree, can easily challenge the decision of the traffic police in court. However, the majority of drivers are often unwilling to waste time in courts for years proving their rights. In the end, a huge number of drivers prefer to quickly pay the fine and forget about the unpleasant encounter with the police or “chain letter” sent by the camera.

By the way, the cops have a favorite traffic violations which they often incorrectly klassificeret administrative responsibility. Here they are:

1) violation of the markup

We all know that to cross a solid line on the road separating oncoming traffic, in any case impossible. This is especially true of the intersection of the solid with the subsequent exit of the car into the oncoming lane. This leads to driver disqualification.

But not in all cases, the punishment for crossing a solid line will be a disqualification. For example, if you leave the yard and turn left through the double solid, then you are threatened with attraction to administrative responsibility under part 2 of article 12.6 of the administrative code.

Here’s how it sounds:

2. Turn left or turn in violation of the requirements prescribed traffic signs or road markings,
shall entail the imposition of an administrative fine in the amount from 1000 to 1500 rubles. As you can see, the penalty you RAID, even if the road is solid markup, but there is a sign prohibiting a left turn. But not so simple. In our country there are many places where the departure from the yard can only be rotated to the right, and in order to move to the other side of the carriageway, must be reached before the reversal, which can often be very far away. As a result, in such places the drivers wanting to save time, go contrary to the prohibition marking or road signs, turn left, thereby violating part 2 of article 12.6 of the administrative code. Just where we like to stand crews of traffic police. Also in places the traffic police often try to impute violators of more serious responsibility, blaming drivers for departure on an oncoming traffic line. But if the driver just turned left, crossing a solid? It’s very simple. Usually tricky traffic cops indicate in the report that the driver was turning left at a right angle (90 degrees), which automatically turns the maneuver into the exit into the oncoming traffic lane. And it is threatened with liability in the form of deprivation of rights. Alas, very often, drivers fail to prove his innocence in allegedly more serious traffic violations. Even in court it is not always possible to convince the judge that you did not go to the oncoming lane, and just turned using a solid left. In this case, in order not to lose their rights, you need to have a recording from the DVR. Otherwise, in the judgment you will see the standard of reasoning of the judge: “there is no reason not to trust the police officer in the performance of official duties.”

2) Turn in violation of the law 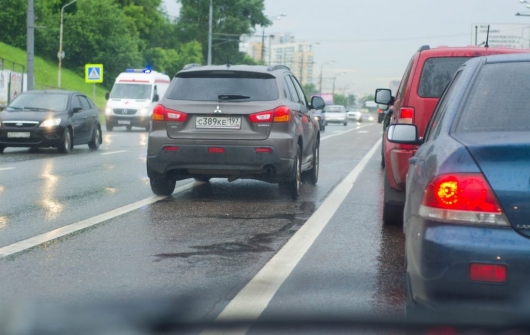 Very often, the traffic police love to watch the drivers in the field next to allowed a turn. As a rule, in such places, many drivers are not quite according to the rules of conduct turn, often stopping the wheels via a continuous line of a marking, near the site where the u-turn is allowed. Here the calculation is simple: hang on the driver for more serious violations.

Recall that the driver faces liability not only for a left turn over a solid line, and turn through it (part 2 of article 12.6 KoAP of the Russian Federation). But when you reversal through a solid path of the car sometimes contributes to short-term movement in an opposite. However, this is enough to DPS officer pulled you over and charged you with driving on the opposite, what you face is not a penalty, and deprivation of rights. By the way, what you just turned around, breaking the continuous line of a marking, will not prove so easy. Even a recording from the DVR will not allow you to see how to move the wheels of your car on the road. In the end, in the autumn of drivers often lose their rights over a simple reversal through a solid, what is provided, in theory, fine. In this case, the judges also usually like to write in the decision that the court has no reason to doubt the testimony of the DPS officer.

3) bypass the obstacles on the road 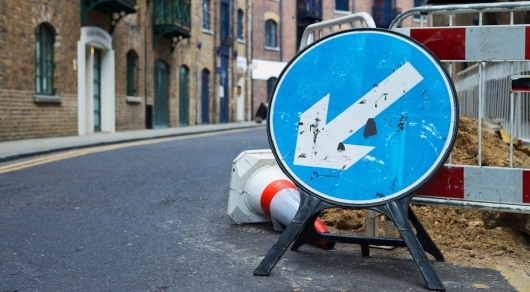 Often we encounter along the way with various obstacles and are forced to go around. Often have to do this in the opposite lane. But did you know that this detour of obstacles is fraught with traffic violations? Especially when you have the possibility of a detour of the machine on the right side. For example, on the side. In this case, you have no right to go around the obstacle on the road into oncoming traffic.

But in this case your actions do not fall under the deprivation, as when you travel into the oncoming lane when swerving the traffic police have to prosecute you under part 3 of article 12.15 of the administrative code. However, it is in theory. Sometimes the traffic police are beginning to impute the driver to more strict liability, trying to get it under part 4 of article 12.5 of the administrative code, which is already facing a fine of 5,000 rubles or disqualification for the term from 4 to 6 months.

Very often such audacity cops introduces drivers to a screeching halt. A in the shower, knowing that their actions when driving over obstacles of maximum fall under the scope of part 3 of article 12.5 of the administrative code, still afraid that the police who draw up a report under part 4 of article 12.5, send it to the court. Given the fact that many magistrates ‘ courts rivet divestment of rights on the pipeline, motorists are very afraid not to find the truth in court. As a result, it promotes corruption. Unfortunately, many drivers often provoke the police to receive bribes. Not saints and the traffic police, whose ranks are constantly caught not clean the hands of the police.

In any case, do not give in to divorce dishonest employees of traffic police, for which the most important is to intimidate the drivers and force them to negotiate on the spot. Remember that in any case truth is on your side. But the truth is you need to be able to fight. Especially in our country. 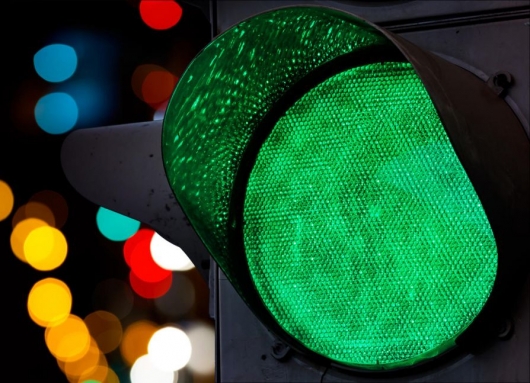 Another favorite made-up traffic violation, which is often charged with the traffic police timid drivers. We are talking about travel traffic to flashing green that is not prohibited by law (with a flashing green traffic light the driver is allowed to finish the maneuver, you have to drive on a blinking green signal of a traffic light).

It should be noted that this type of violation is popular with traffic police, as it is possible for a short time to bring to administrative responsibility, a considerable number of drivers Perepyolkin plan protocols (and not only). To prove that you did not blow the red light, you will be problematic. Especially the traffic police, who initially decided to cheat by accusing you. That’s why it’s so important to have a DVR that is able to cool the ardor of arrogant cops. Because the record from the video recorder will really help define what signal you pass. Without DVR, you will be hard to get justice in court, where judges are somehow more likely to believe the police, who, as always, not to trust no reason. 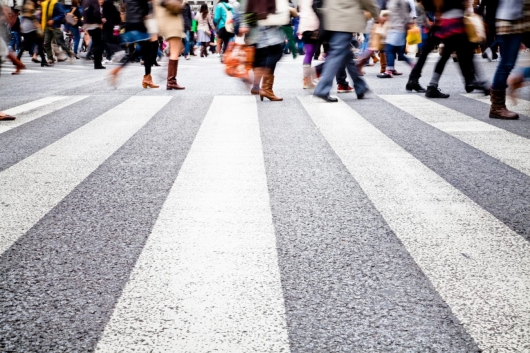 But not always drivers just get a fine for nepropusk pedestrian. Sometimes motorists prosecuted, despite the fact that the pedestrian has not yet started to cross the road. In certain cases, indeed, some drivers write fairly fine. But most of all of these points are controversial and should be interpreted in favor of drivers. But, alas, the law only perfect on paper. In fact, in most cases, even in controversial cases motorists receive the Protocol. In this case, to prove innocence of the driver can only record from the DVR.

In words it is unlikely you will be able to prove that wasn’t supposed to give way to pedestrians who had not yet started to cross the road. Especially if the police came “ambushed” with the aim to gain more protocols.

Also not so easy to prove his innocence in court, where it is unlikely that you will believe. 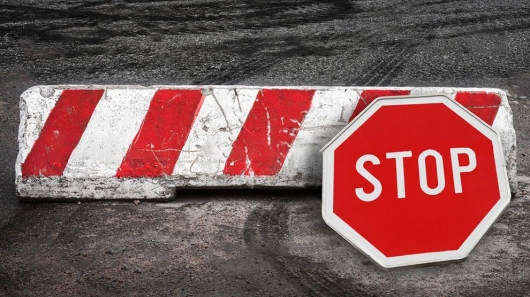 And finally, another traffic violation for which I love to write fines to the traffic police. We are talking about the stretch of road where there is a Stop sign requiring the driver before departure on the road to a complete stop. Unfortunately, in our country on the road quite often, there are areas where not very comfortable and it is expedient to make a complete stop.

Especially if in such places formed tube. As a result, many drivers do not make such places a full stop of the car, where it is then and come to the attention of the police.

Drivers are often held accountable for postanovku vehicle before a Stop sign, despite the fact that they completely stopped the car. Especially interesting gibddshnikov cars, where there is no DVR. Indeed, in this case the driver would be virtually impossible to prove his innocence. And if you think the traffic police can prosecute for this kind of traffic violations only if the fact of fotovideofiksatsiey, you are mistaken. As with most traffic violations, traffic police will make the Protocol and with no record of violations. You know, the fact of the violation will be recorded in the Protocol on the basis that allegedly saw a policeman.

In the end you will have two options: challenge the decision in court and then ready to the end to defend their rights in various courts or silently agree with the fine and pay it within the statutory period, which is what most drivers preferring not to waste time and nerves.