Gaylord Gladiator: a failed best car in the world

The story of one very unusual car: the Gaylord Gladiator 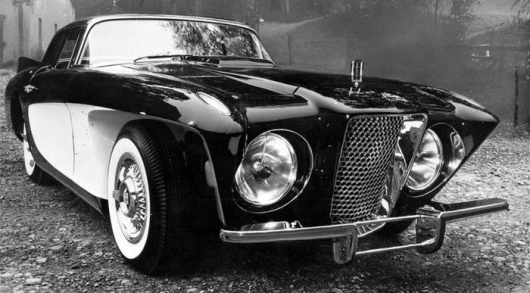 If things had been different for brothers Gaylord, 1950-e years would see the birth of the best car that has ever seen the world

Model car Gaylord Gladiator was two steps away from the title and the opportunity to become “Best car” in the world. If she did, a select group of premium brands would have added another, who, perhaps, would bring something completely new into the outdated world of everyday luxury. Perhaps with the arrival of this American model today, the premium class would have looked completely different.

Here is the story of an American rolls-Royce, who tripped at the final hurdle.

Postwar America was able to profit from the war and out of conflict not only on the winning side, but also to earn maximum incentives in the form of reserves. The newly wealthy in the world conflict the country needed in the implementation of the accumulated funds, most clearly understood in the circles of the wealthy community.

Among them were the brothers James and Edward (Jim and ed) Galardi who was looking for a way to create their own capital, which has surpassed the legacy of the mega-rich father, once invented a simple metallic hair clip which, thanks to its ingenious simplicity and effectiveness in a short time conquered half the world. But Jim and ed wanted more – to build a machine.

They were looking at huge, heavy, walkie and wayward cars that were produced in the United States, and compared them with the toned, sports coupe, manufactured in Europe. Brothers Gaylord wanted to combine the power and style of the American version, with the handling and class of Europe. Money was not a problem, they wanted to build the best car in the world. 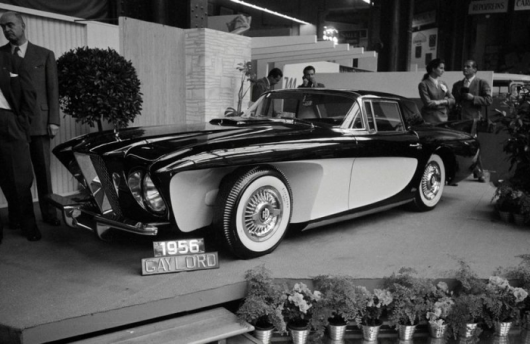 Jim developed a (relatively) lightweight tubular frame with a long tail and short nose for perfect proportionality. Since the tubular frame would be excessive rigidity, which to Grant Tourer and just the premium coupe was excessive, the engineers worked on the sketches of one of the brothers, adding elements of damping in the structure, discontinuing unnecessary pressure on some parts of the frame.

Project work in “Gladiator” was ahead of its time. Spare wheel, for example, was hidden in a compartment under the trunk. They can instantly take advantage of conveniently pulling the wheel on the roadway, to the unfortunate gentleman had not soiled their clothes. However, the real highlight was the roof; the world’s first electrically folding hard roof. She went up and down with the push of a button a single electric motor. Ford Skyliner of the late 1950s and the years that came two years after the prototype Gladiator, needed for similar action in the seven engines.

The coupe weighed only 1800 pounds, plus or minus, making it much easier for other cars developed in the United States. This meant that he coped better with the sprint and was pretty fast. The Cadillac engine with a power of 305 HP put it in movement to 100 km/h in just eight seconds, which was two seconds faster, models Cadillac El Dorado, which was originally developed engine. 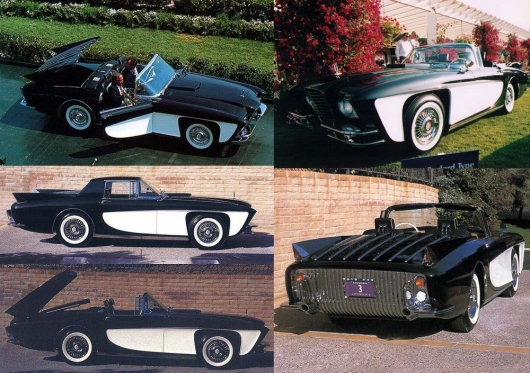 Peerless interior was distinguished by the presence of the best sorts of wood, leather and sophisticated interior as a whole. Gladiator merged into one bowl of sports performance and handling with luxury. It was an unprecedented step, which dare only the best brands in the world 30 years-th later.

But such experiments on the combination of incongruous, apparently, was not supported by the public at the time. Just need to sell 25 cars a year, the project to work and showed its viability. However, even this failed to make the ambitious “the Gladiator”.

Gladiator from 50 years bribed their appearance

But perhaps the most obvious difference from other models on the American market was the body style. Jim and ed Gaylord wanted a “shell” reminded, as a contemporary American tendency, demonstrated in the caudal fins and contrasting side panels, turned in the direction from the front wheels and the pre-war British and German mark. The combination was interpreted by the addition of a classic front of the car, one of the most striking stylistic features.

High grille of the old school of wire mesh was surrounded by huge headlights Lucas P-100, the same as in the old classics, which was so fond of Jim and ed. The prototype can detect a very strange front wheel arches. Looked with them premium coupe, like this car amphibious and give him a pond, he will float. However, on later models from such decision had to be abandoned. At the Paris motor show of 1955, autogermana met such a solution is not the best way.

But production was lost a mighty Gladiator. By choosing the German company “Zeppelin Luftschiffbau” (the former producer of hydrogenated airships), to begin production of the model Gladiator, brothers Gaylord, were already unhappy with the work done by the German plant. Production was halted, began the trial.

Some narrators “Gladiator story” claim that the legal wrangling had brought Jim to a nervous breakdown, and then ed convinced him to abandon the whole idea of creating “the best car in the world”. Others say, the realization of the dream prevented the economic realities in which it was necessary to raise the cost to $17,500 ($200,000 by today’s standards). For cars of that era it was a very high price.

Whatever it was, from 1955 to 1957 was made only four “Gladiator”, including the prototype with the eyes of an owl. It is believed that he survived only two models with the round Quad headlights, built in the traditional style on the Zeppelin factory. One in the Zeppelin Museum in Friedrichshafen, the other is privately owned in the United States.

The Gladiator was so close to greatness. We’ll never know what could be, if the relationship between Jim and ed Gaylord and Zeppelin is not spoiled, and the model was put into operation. Perhaps Maybach and rolls-Royce eventually there would be a serious competitor… Who knows.