Front occupants of the Jeep and the Ford are in danger

SUVs can protect passengers as bad as cars

People in 2018 prefer crossovers to other types of vehicles. These big cars are easier to carry passengers, they put more things, if it is necessary, therefore, many can’t resist from buying a large SUV, ignoring passenger cars and other body versions of cars.

Big machine creates the illusion of good defense. Actually in reality it is not so. Not every vehicle protects passengers alike. Before you go to the dealer and buy a new SUV, you probably need to know how good or bad some of them are in the time of the accident.

The insurance Institute for road safety, or IIHS, recently destroyed eight different models of SUVs in the name of obtaining information about the level of disaster protection for the front passengers. The ratings level on which the Institute IIHS considers the protection of vehicles (how well the car withstands the crash tests) as usual – four: good, acceptable, marginal and poor.

Six of the eight mid-size SUV was one of the two highest ratings for the approbation of the Institute in a collision with a stationary obstacle small overlap on the passenger side. The other two, the 2018 Jeep Grand Cherokee and the Ford Explorer 2018, received the lowest rating of tests (Poor) bad. After watching the video, it is easy to understand why.

A little test on the floor on the passenger side simulates the vehicle hitting a tree, pole, or another car at speeds of 64 kilometers per hour, the collision occurs at the contact of the front quarter of the car. Note that IIHS only recently started to do the test on the passenger side, in attempts to force automakers to give the front passengers the same protection as the driver. As it turned out, the front passengers were exposed to great danger, as all the automakers, with very few exceptions, do not “bother” about the mounting of the structure on the right side.

Of the eight mid-size SUV IIHS rammed test object with a small overlap on the passenger side – 2019 Kia Sorento, 2018 Volkswagen Atlas and 2018 GMC Acadia received the highest overall rating, good, from the point of view of occupant protection. 2018 Toyota Highlander, 2018 Nissan Pathfinder and 2018 Honda Pilot received an acceptable rating. On “troechku” no one “gave up”, but the test crossovers have identified two outsiders: the Grand Cherokee and Explorer. Passengers in these cars, if you survive, you get multiple injuries. This is the result – a solid deuce! 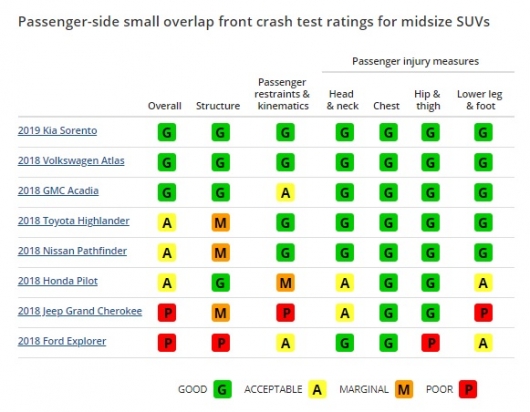 Officially, the IIHS announced that the SUV Explorer got a bad rating “because its structure has been seriously compromised” in the test. Here’s what can happen to real passengers in the Explorer that crash, according to IIHS:

The invasion of the interior of the cabin has reached 15 inches (28 cm) in the lower front door hinges and 13 inches (33 cm) on the upper door pillar and the dashboard. A door was moved 6 inches (15 cm) to the side of the dummy. Data taken with the dummy, showed a high risk of injury to the right thigh in a real crash of the same severity, and the possibility of injury of the left tibia.

Explorer also bad passed a structural test of the driver’s-side thereby earning only a “moderate” rating in the overall test. Ford will revise the power structure model Explorer, and promised that the new model will improve small overlap protection on both sides.

The Grand Cherokee, despite similar low rating, the situation was better. Movements to the interior design elements was less. But no serious injuries, according to the IIHS, the passenger still can not avoid:

Jeep Grand Cherokee received the maximum entry design 10 inches (25 cm) in the lower door hinge pillar. But more alarming was what happened with the head of the dummy passenger, she got hit hard on the dashboard the front airbag. Then turned side airbag, front right door opened, fallen into fragments during the rebound from the obstacle. The data from the dummy indicated that the right leg is injured seriously enough, head was also injured.