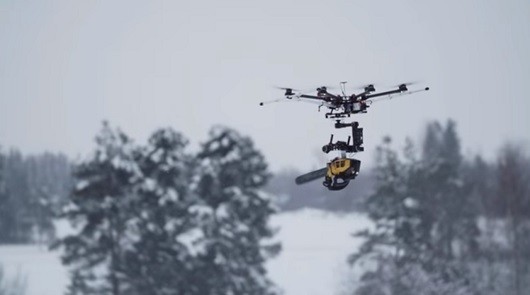 In recent times the advent of the next awesome video in the network not surprise anyone. But hot Finnish guys have managed to do the impossible — they made a little video, which rightfully claims to be the “Oscar” in the nomination “the worst film”.

However, it deserves not only this title. Because this video is absolutely perfect and the plot and “protagonist”, and camera work. Hollywood producers time to look at Finnish craftsmen and offer them to shoot a feature horror film.

So, what is so unusual did the guys from Finland? At first glance, nothing. They just took the drone, which now indulge all and Sundry, and attached a normal working tool, which was made by the chainsaw. Moreover included. Driving these simple “monster”, the guys threw a little “massacre”. His victims were harmless snowmen, Christmas trees, and sosulski.

It would seem that the Finns created “Frankenstein” ready to kill and destroy everything in its path. But he still found a weak spot. They were balloon — when you try to attack a flying “monster” enough for the concussion. He fell to the ground and fell apart.

The moral of the story is that good always wins. Well, the Finns should Express my deep respect. They created a short “horror movie” I want to revisit again and again.