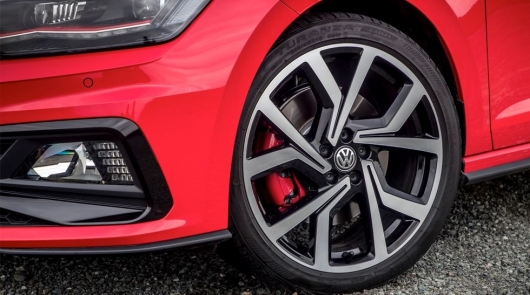 Brake master cylinder (GTZ). What we know about him? Yes, in principle, not so much. He rarely gets enough attention from motorists. Many people now hardly heard, and if heard, it just will not be able to name where he is. But without it, the only way for a flying car laid in the ditch (at best) or a wall (if not lucky).

Perhaps we should start with the fact that the brake master cylinder as the Central element of the braking system, in fact, as part of the system could not see the light. If it was not complied with two conditions: the car is not crossed would be a lot of 600 – 800 kg and the speed remained at about 30 to 40 km/h No more.

Then, theoretically, the drive brakes could remain even by trastovyy like cheap bikes of today. This would be enough to stop an antediluvian vehicle. However, you would have to pump up the right leg and braking much in advance, so as not to get into an accident. But history has no subjunctive mood, the automotive world began to develop on well-known ways in which you will have to brake one, two, and sometimes twenty tons of metal, plastic and rubber hurtling at speeds well over 100 km/h. to Do this, as you know you need to clearly, quickly, efficiently and reliably.

Therefore, quickly appeared and more practical solutions for the braking system, the main of which was the hydraulics. The fact that the fluid is not compressed, which makes it ideal for power transmission from one part of the system to another. It is here that the corner gets the same GTZ, as it provides transformation efforts from the brake pedal into hydraulic pressure in the system, becoming its key component. 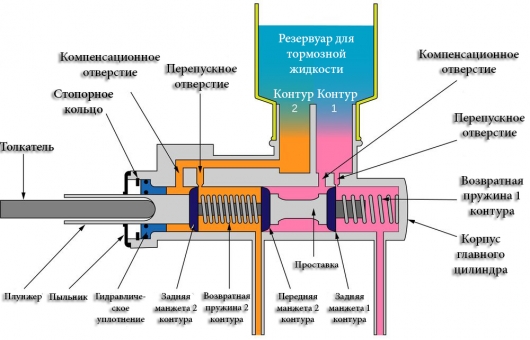 Imagine the brake pedal. Immerse yourself in the relative darkness of this imaginary footwell and press the pedal. What will happen?

In most vehicles, the movement of the pedal to be transferred directly to the stock vacuum booster, which will give pressure on the primary piston. In the process of moving it overlaps the vent hole, whereby the pressure begins to rise in this circuit. The pressure begins moving the second circuit, in which pressure also rises. 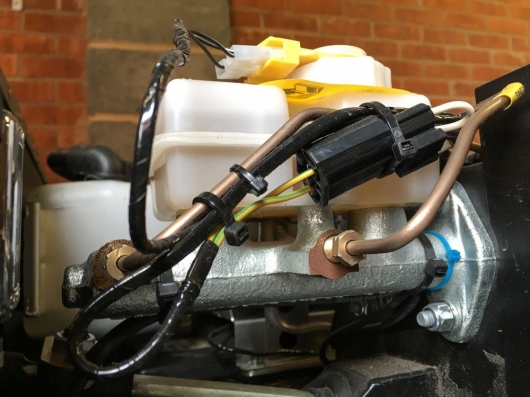 At this time, if you release the brake pedal, it will return to its normal position by means of return springs inside the brake master cylinder.

Continue. The brake pedal is pressed, this means that the pistons inside the GTZ begin to move forward, overcoming the resistance of the return spring. The movement of the pistons is accompanied by overlapping of the compensation channels, which causes the opening of the passageway and sealing the entire circuit. Starts to operate the brake mechanisms, their movement is initiated by the pressure of fluid in pipelines (in excess of the atmospheric pressure). Brake fluid begins to put pressure on the actuator, the cylinders in the calipers are moving toward the rotary disc, pressing the pads to last. 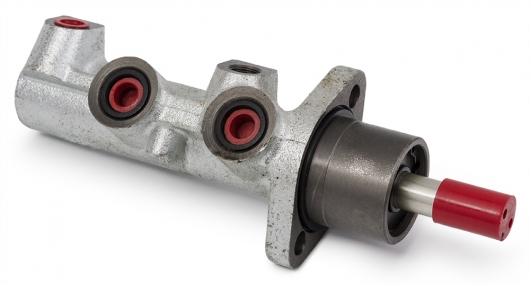 Don’t forget to mention that from the master cylinder are two highways which also is the brake fluid. One highway leads to two diagonally opposite wheels and the other one leads to the other. This is called dual-circuit brake system, more precisely, one of its varieties – diagonal connection. This is a security feature, which ensures that even if one of the brake lines will leak, you will still be able to stop the car because all the brake fluid will not leave completely actuators.

After holiday brake pedal, the pistons return to their original position. The pressure in the circuits is reduced to atmospheric. Brake fluid through the bypass opening is returned to the tank. 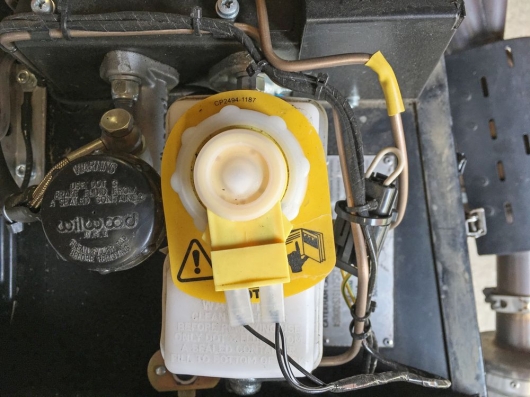 If you look at the master cylinder (it is usually installed on the vacuum brake booster on the driver side at the rear of the engine compartment), which is usually located horizontally, you will see it upright reservoir for brake fluid. His task is to make sure that the system will not get air during the working stroke of compression while maintaining adequate volume replacement fluid to the system is completely “ate tormozuhoy” at all stages of its work and under any conditions.

So quite simply, brake master cylinder works like a pump: brake pedal moves two pistons inside the master cylinder (GTZ), which in turn transmit the force of the brake fluid in the two lines for sending equal pressure to all four wheels. The two springs behind the pistons, return the system to its original position when you release the brake pedal, removing the brake pads from the brake discs.

Now, in General terms, you know how to operate the master cylinder of the brakes.

Illustrative video explaining the work of the main cylinder:

Video taken from the YouTube-channel Device for Cars