Why did electric cars lose power with increasing speed 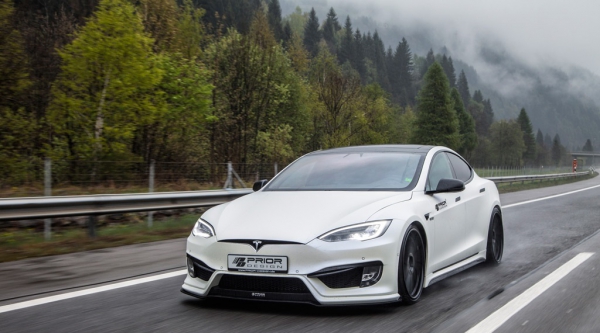 Tesla Model S P100D breaking records of speed and dynamics right and left. No joke, 2.28 seconds from 0 to 100 km/h! Such dynamics just don’t fit in my head! And after all before us not the Bugatti Chiron, is limited in terms of production rare hypercar, and relatively common, the production model of the sedan. Thus, Tesla Model S P100D, it is the fastest mass production sedan for acceleration from standstill to 100 km/h which has managed to set a record as the fastest four-door car on the ¼ mile.

This is all very well and good, but how is a 2.2 ton Behemoth manages to put such records? All a matter of torque. But rather that the maximum level of torque the motors out from the beginning of the movement. You just press on the gas, and the machine provides you with maximum locomotive traction, and with it comes the dynamics. How does it happen? The explanation in the video below.

Understand the technical intricacies, we will help our old friend geek Jason Fenske and video from his channel Engineering Explained. Let’s see how the cars kind of P110D is able to instantly activate all the potential torque from a standing position. The issue is solely in the technical field, but in our opinion Fenske managed to pass him as always the most intelligible and understandable language.

So, how does this electrostan able to leave 11 seconds on the quarter mile?

It all starts with the most important technical symbiosis of two main elements – battery circuit and motors. Their interaction is configured in such a way that they are able to transmit the maximum torque, giving the driver in a peak performance at the beginning of the set speed. True speed, power will inevitably and steadily decline, but more on that later.

This explains the fact that peak torque is available at start from 0 km/h, because the reverse electromotive force may occur only by increasing the rotation of the electric motor and the faster it will rotate, the more will produce a negative EMF, which as we have seen detrimental effect on the power output of the system. Add to this the increasing air resistance with increasing speed, the rolling of tires and the resulting slowdown in the dynamics of the set speed of the electric vehicle.