Does the fuel consumption driving with cruise control? 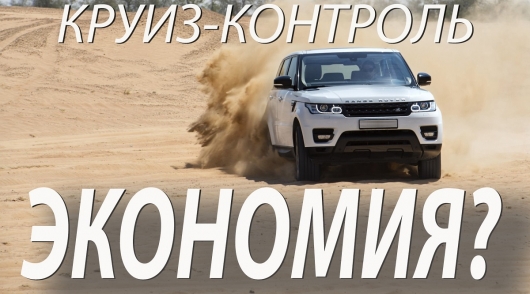 Every driver wants his car spent less fuel. Especially after last year’s rally of prices at filling stations across the country. We all know that fuel consumption is influenced by many factors. For example, a significant contribution to the efficiency of the machine makes the driver himself, or rather his driving style.

But not only from the style affects the fuel consumption. The final fuel consumption is also affected by various convenience functions in the car. So it is not always enough to remove your foot from the gas pedal to reduce the overuse of gasoline. And how about using the cruise control? How does it affect consumption? Can I use this function to save? It turns out that there is no single answer.

In fuel economy there are pitfalls 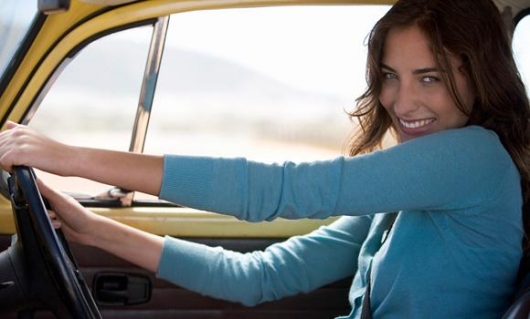 On the one hand, eco-driving is not so difficult, and if you have a few good habits to save fuel, you can achieve excellent results due to his driving style – that is, low fuel consumption and, consequently, increasing the reserve on one filling. On the other hand, this particular economical driving style many drivers will cause discomfort. Because you will constantly think about the fuel consumption.

Also your savings are likely to be meaningless if you use the air conditioning, which can easily increase fuel consumption by 1-2 or even 3 litres per 100 km. That’s why if you want to somehow reduce the fuel consumption, you must make reasonable use of the air conditioning system in the car or completely abandon it, which, of course, silly. Especially if we are talking about the hot days.

After abandoning the freshness in the cabin in the hot summer day, we can save 40-80 rubles for every 100 km. Think whether the game is worth the candle – whether you want to risk your safety and the safety of passengers, because the heat affects the reaction of the driver, his alertness and overall its well-being (for example, the heat may cause fainting, etc.).

Also on the fuel consumption influences the use of other equipment of the car: the radio (sound system), lighting, charging the mobile DVR is connected to a USB port, etc. But that does not mean that in the pursuit of fuel economy you need to just give it up. Agree, that would be stupid. 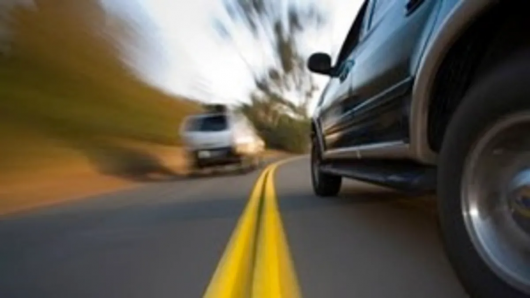 Much better to worry about the technical condition of the car, wisely using its functions and systems, and also to follow a few obvious rules. You should know that dynamic, and the drive always increases fuel consumption. But this does not mean that you should drive at the speed of 50-60 km/h in 5th or 6th gear is pointless. Thus, a relatively fast speed enables long driving with constant engine speed at the selected optimal gear, which significantly reduces engine wear.

In addition, you have to remember that to achieve the fuel economy you need to close all the Windows (open Windows increase air resistance, which is the main culprit of excessive fuel consumption). In particular, you should monitor the pressure in the tires (wrong pressure in tyres can lead to an increase in consumption by 1 liter/100 km).

In some cases, experts advise to achieve maximum economy to turn when driving on the highway the cruise control. But whether using this function, you can reduce the fuel consumption? Does this advice always?

Saves whether a cruise fuel? And Yes … and no

The use of the system the cruise control definitely improves the comfort of driving, allowing the driver’s legs to rest. Moreover, the use tempomat in the car comfortably even during short trips on the highway. However, the use of cruise control in the city, often unnecessarily, and in some cases even DANGEROUS.

But in any case, for people who travel a lot by car or go outside the city, cruise control, undoubtedly, is an useful addition in the car. But can it reduce fuel consumption?

It all depends on the type of cruise control and route, but rather on the terrain you will be riding. If you own a car with ordinary cruise control, without any additional (“auxiliary”) options, with moderate movement on level ground with no rise in fuel consumption may actually fall slightly. Why?

The fact that the cruise will be to maintain the same speed (exhibited speed) without unnecessary acceleration, speed reduction, etc. electronics during the movement detects even a minimal speed fluctuations and can respond almost instantly, minimizing the acceleration in a wider range. Unlike the cruise control the driver can maintain the same speed without constant monitoring of the speedometer. 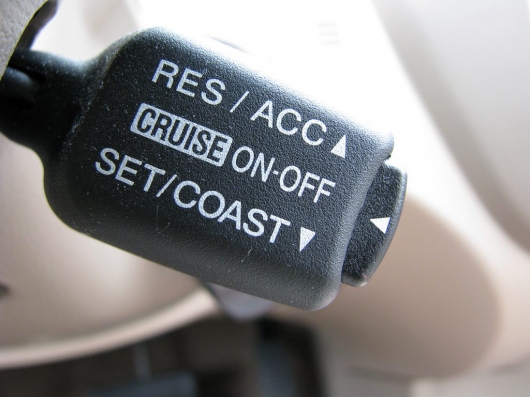 Cruise control ensures the stabilization rate, allowing the drive to operate without change of load, that in the end, after a few hundred kilometers would lead to some difference in fuel consumption to decrease.

In addition, working cruise control affects us psychologically. Using it, we won’t do that too often overtake other cars, pressing the gas pedal to the floor.

We, on the contrary, when driving at cruise, generally relax, enjoying moderate traffic on the highway in one lane. Sounds unusual, but cruise control can really even affect those drivers who like to push the gas pedal.

Also when setting the speed on the cruise control system should pay attention to how fast moving passing cars. If, for example, the main stream moves at a speed of 110 km/HR, put on tempomat speed less not to constantly overtake other cars. So you can save when driving on the cruise even more.

In some cases, the cruise control leads to an increase in fuel consumption? 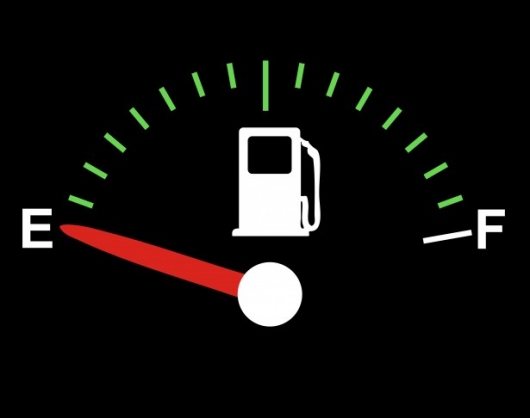 But not so simple. Fuel economy when enabled, the cruise control can only be achieved under certain conditions. For example, if you use a car in an area with lots of slopes, access roads, etc., cruise control, conversely, can lead to increased fuel consumption. Especially if you go on the big slopes and you pass them a few miles.

For example, when driving uphill the cruise will attempt to maintain the set speed at any cost, including by maximizing the throttle opening, which will inevitably lead to greater fuel consumption. However, during descent, cruise control, in contrast, will attempt to limit the vehicle speed in accordance with the specified settings. In such areas it is better to turn off the cruise control, since only the driver knows how to go when lifting or lowering. 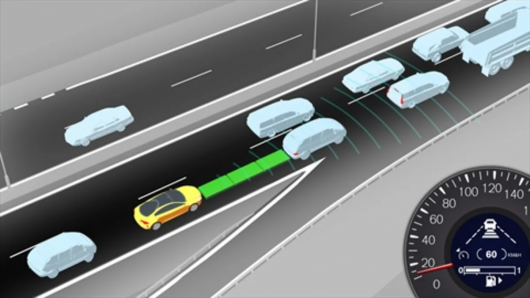 But, as we said above, refers to the ordinary, the classic cruise control. Another thing, when we talk about vehicles with adaptive cruise control in some cars, for example, can be supported by the testimony of satellite navigation.

In this case, the computer is able to predict changes in the roads on the route and to proactively respond to the inevitable driving options.

For example, if the electronics of the adaptive cruise sees you car, active cruise control in advance the speed gradually decreases, and then again accelerates to the set speed.

Besides, by reading the data from the navigation system, a cruise control adaptive system can overcome a difficult stretch of road without any undue impact on the throttle. Some cars have a feature with the descent. In this case, the adaptive cruise control when traveling downhill can activate the help system during the descent to control speed with the brake system. In the end the work of the adaptive cruise control, adjustable terrain allows you to achieve the best fuel economy in contrast to the classic cruise.

Theory theory, how does it work in practice?

Someone will of course say that all this is theory, which in the auto world often has nothing to do with reality. How does the theory of fuel economy with the included cruise-control in practice?

We decided to check it out during the trip from the center of Moscow in Kolomna and back (about 112 km, including a trip around the city in one direction). For this purpose it was decided to hold two-in the same night at the same temperature. For the test took a Volkswagen Golf with a gasoline 1.6-liter four-cylinder engine producing 110 HP and manual transmission.

The first trip we used the cruise control and drove at a speed of 110-120 km/h. Movement was free. During this trip, average fuel consumption, which indicated the computer was 7.1 l/100 km after a distance of 224 kilometers.

During the second trip in the same conditions (also at night, with the same temperature and weather outside) while driving on the highway, we used the cruise control set speed of 115 km/h. Going the same distance, the onboard computer showed an average consumption of 6.7 l/100 km.

The difference of 0.4 l /100 km is insignificant and shows that under optimal road conditions (both from the point of view of traffic intensity, and terrain) cruise control can help reduce fuel consumption.

To use or not? 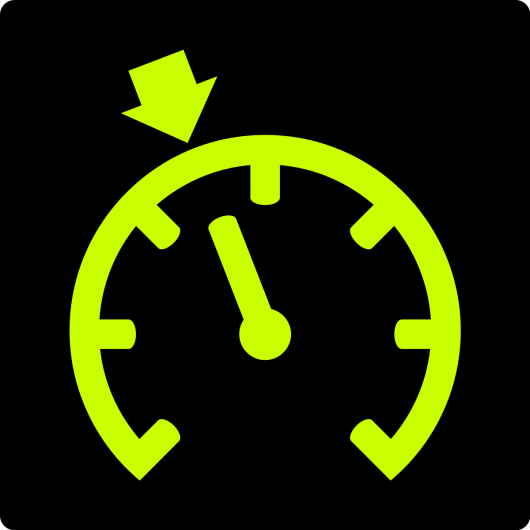 By all means, enjoy, but head! When driving on a flat road, with little traffic, the cruise control is almost a salvation. Especially when you drive far. But even for short distance trip on cruise control, it can be easier than when off.

However, if you are driving on a mountainous area, where even high-speed motorway or highway becomes a winding or on the road too much traffic (dense traffic), then turn on the cruise is undesirable, since the driver on such roads requires constant attention and vigilance, because in such circumstances will always have to reduce/gain speed to overtake etc. including on such roads should not even include adaptive cruise control, despite the fact that he’s in such conditions is much more efficient than the old classic system the cruise control.

Remember that difficult roads is the key, not fuel economy, and safety!